Big leaps in innovation don’t occur every day. It sometimes takes special people (think Steve Jobs) or teams (think NASA) to imagine so far beyond our current experience that they create a new paradigm. In hindsight, these major advances might seem obvious or inevitable, but if you have lived through any of them, you’ll recall the awe with which people viewed the change.

Those big leaps in understanding and technology are rarely associated with the fertilizer business. However, that could change thanks to new Canadian research to improve nitrogen-use efficiency using the latest in smart coating technologies.

Fertilizer is critically important in food production—feeding the world’s population in 2050 will mean doubling current food production. There will be a heavy reliance on fertilizer, and improved use efficiency will go a long way toward conserving the resources we have and using them sustainably.

Bill Gates understands the importance of fertilizer. In September 2015 he said, “I’m the world’s biggest fan of fertilizer. I’m endlessly fascinated by the stuff. It’s a magical material that can transform the lives of the poor by helping them grow bigger harvests and adapt to the impacts of climate change.”

To say the fertilizer industry in Canada is huge is an understatement. According to Fertilizer Canada, the industry employs over 12,000 Canadians and creates $12 billion in annual economic activity. Canadian fertilizer is exported to over 80 countries and the world depends on Canada for 12 per cent of its supply. That Canada would be an incubator of fertilizer research should not come as a surprise.

Maria DeRosa and Carlos Monreal, from Carleton University and Agriculture and Agri-Food Canada (AAFC), respectively, are developing a fertilizer technology so innovative and so advanced it’s difficult to comprehend how it even works. One has to understand and accept that plants communicate through their roots with the soil flora and fauna, and one also has to believe that this communication can be “read” and understood by a man-made system.

DeRosa, an associate professor of chemistry at Carleton, had been engaged in research related to making responsive materials, particularly ones that could be used to deliver drugs. As with many great discoveries in science, it was a chance conversation that prompted DeRosa and Monreal to consider how these responsive materials might be used in a completely different setting and for a different purpose.

“I had an honours student who had worked with Carlos for the summer,” DeRosa explained. “Carlos had explained to him his quest to find ways to improve nitrogen-use efficiency and prevent excessive losses. It was that student that connected us and here we are today.”

“A lot of work has been done already that shows improved fertilizer efficiency with smart coatings in a laboratory setting,” she added. “The next step is to see if these efficiencies are demonstrated in a greenhouse setting. If so, then field trials would be on deck.” 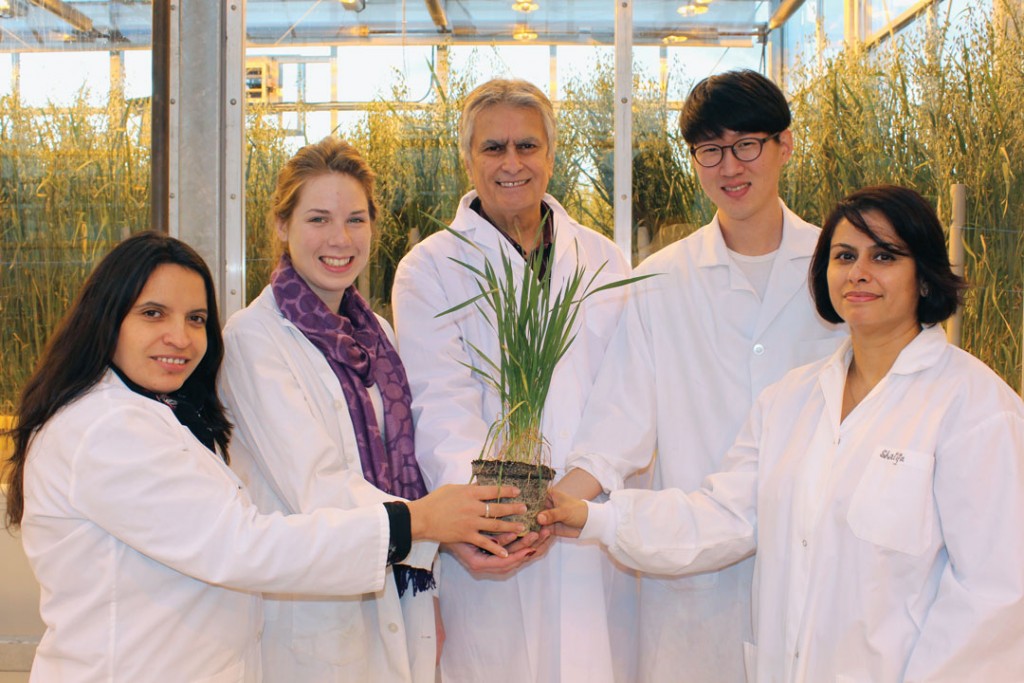 Monreal is a research scientist with AAFC in Ottawa. His expertise includes the dynamics of interactions between plant roots and soil micro-organisms—the organic compounds that roots exude and how they are linked to nitrogen mineralization and uptake by plants. Monreal’s interest in this area of research was sparked when he was working on his bachelor’s degree in Chile in the ’70s.

“I happened to be involved in a nitrogen fertilizer research project and I was measuring how much nitrogen leached down the soil profile and beyond the reach of the crop roots,” he said. “That really left a mark on me—how could these losses be prevented?”

When Monreal came to the University of Alberta later on, a constant topic of conversation was how to prevent nitrogen losses from fertilizers.

“We tossed this idea around, conducted research and published results, but nothing concrete was ever developed,” he said. “At that time, we just did not have the level of knowledge and analytical technology available to us that we have today.”

Since the late ’70s, basic research on soil systems and improvements in analytical techniques have taken scientists to the point where they can understand the chemical language of plants. The basic premise of this new fertilizer technology lies in understanding the existence of communication between living cells in nature. In soils, plants will signal that they are deficient in nutrients. In the case of nitrogen, the plants will send chemical signals that are detected and captured by microbes, which then respond to those signals by producing ammonium nitrate for the plant.

Detecting the signals has meant that a nano-biosensor could be developed—pieces of DNA called aptamers. “Aptamers act a lot like antennae,” Monreal said. “If these aptamers are housed in a polymer film coating, it could be used to control the release of the fertilizer inside the coating until the plant needs it.”

That’s where DeRosa’s research expertise comes into play, developing the smart coatings that will be required to keep the nitrogen unavailable until the plant communicates that it needs it.

According to Monreal, wheat requires nitrogen at certain times in its approximately 100-day growing season. “We’ve found that at days 25 to 50, most of the nitrogen is taken up by the plant,” he said. “Using fertilizer coating containing aptamers, a smart coating, would enable the farmer to ensure the nitrogen fertilizer was available when the plant needed it. It would not be subject to losses through rain, leaching or gaseous loss.”

The basic research into the organic compounds that communicate the plant messages and how microbes respond with various actions is well understood. Alberta Innovates Bio Solutions and AAFC jointly funded early prototype research into this technology in 2012. More funding has since been received that will allow for advanced prototype development by 2016.

“If everything goes according to plan, we will be in a position to work with fertilizer manufacturers who are even now interested in commercialization of this technology,” Monreal said. “This could be in a farmer’s field by 2020.”

While there is still a lot of work to be done in both the greenhouse and the field, DeRosa believes the biggest barrier to commercialization is ensuring the coatings are biodegradable and no residues are left behind after the fertilizer is released.

January 6, 2016
For Claire Citeau, witnessing the impact of currency devaluation while she was growing up in Africa helped spark an inte... More
Prev Post CROP COMMISSIONS' RESPONSE TO BILL 6
Next Post EMISSION POSSIBLE

Fertilizing for the Future

THE TEST OF TIME