At one time, adopting cutting-edge technology in agriculture meant trading in your walking plow for one of those newfangled horse-drawn models. Fast-forward a century or so, and the progress is staggering. For grain farmers and others in agriculture, biotechnology, or Bt isn’t just changing the game, but rather rewriting the rulebook. While keeping up with the changes is no small feat, the rewards for those who do may be well worth the effort.

“Agricultural Bt can be broadly defined as scientific applications that involve the manipulation of living organisms, or parts of living organisms, including genes, to provide new methods of production or develop new products,” said Francois Eudes, research scientist at Agriculture and Agri-Food Canada (AAFC).

ASTONISHING ADVANCES
Given the many challenges faced by crop farmers today, the emergence of plant Bt, which traces its roots back to the 1960s, is especially notable. “This area of Bt began with taking segments of plant tissue and regenerating entire plants from just that tissue,” said Kevin Rozwadowski, research scientist in recombination biology at AAFC. “That process resulted in a range of new varieties and products. It also laid the groundwork for enabling transgenic technology [the introduction of new and functional genetic material into an organism], which is the more widely understood example of plant Bt today.”

Armed with this tool, scientists have made advances in a range of agricultural sectors at an astonishing rate. For livestock, they’ve developed new vaccines and made the production of feed additives, such as essential amino acids, more economically viable.

MULTIPLE TECHNOLOGIES
GMO technology involves the transfer of genes from one species to another unrelated species. “Classical examples are herbicide and insect resistance,” said Eudes. “While resistance traits exist within the gene pool for some herbicides and insects, genetic engineering has resulted in additional resistance not available within the gene pool of the host plant species. Resistance to virus and fungal diseases has also been obtained in crops through this approach.”

Then, there are the developments in horticulture; during the last few years alone there have been amazing breakthroughs, such as the non-browning Arctic Apple. “The novel part is that most transgenic technology to date has been applied to benefit the production side of agriculture,” said Rozwadowski. “Innovations like the Arctic Apple are great examples of products in the marketplace helping to earn consumer confidence and acceptance around this technology.”

One area of Bt that has exploded in recent years is CRISPR/Cas9 gene editing. The technology enables insertion, deletion or replacement of DNA at a specific site in a genome of an organism or cell. There is a handful of technologies that can carry out gene editing, but CRISPR has generated the most excitement due to its efficiency and ease of use.

“While GMO technology involves the transfer of DNA from an unrelated species, gene editing leverages DNA sequences that already exist in the host cell,” said Eudes. “Gene editing is a powerful tool to affect targeted changes with precision in livestock or crop genomes.”

THE REGULATION SITUATION
It’s a lot to digest and, not surprisingly, a lot to regulate. In 1993, the federal government announced a framework for the regulation of Bt products in Canada. One of the principles was that existing legislation and regulatory bodies would be used to regulate Bt products, and that they would build on existing laws and expertise rather than develop entirely new laws and agencies. This means that agricultural products of Bt are regulated under the same broad legislation and structures—with the addition of some new regulations and administrative procedures—as agricultural products produced in more traditional ways.

Several agencies are involved in the regulation of agricultural products, with the main ones being the Canadian Food Inspection Agency, Health Canada and Environment Canada. “Canada has a unique regulatory system in that it is trait based,” said Rozwadowski. “If something is a novel trait, it will trigger the regulatory process to different degrees.”

A great example of the process in action is provided by Andrew Casey, president and CEO of BIOTECanada, an industry association whose aim is to advance the Canadian Bt sector. He points to one company making jet fuel out of genetically modified mustard seed. Because it’s lowering CO2 emissions, it’s regulated from both a crop and environmental standpoint. When the seeds are crushed and the oil extracted, it leaves meal that is fed to livestock, bringing AAFC into the equation. Since those animals will eventually be consumed by humans, Health Canada also has a role to play.

“It’s important to coordinate all of that regulatory oversight,” said Casey. “If the process gets jammed at one stage it diminishes the value of the product, but I think we’re doing a good job. I’ve heard many companies saying that one of Canada’s greatest strengths is its regulatory system, as approval in Canada can persuade many other countries of a product’s safety.”

In Casey’s view, a strong and science-based regulatory system is a competitive advantage and must be a priority. Coordination of regulatory and policy approaches for Bt is essential. When cutting-edge science is backed with proper regulation, the possibilities are endless. “When I think about how far society has come from the selective breeding of past centuries to present day, it’s phenomenal,” said Casey.

“We’re now at the stage where we can turn genes on or off and create special properties in plants and animals. You have to view this in the context of a world that will soon contain nine to 10 billion people, which presents two challenges: finding ways to feed them with the same amount of arable land, and growing food in places where we couldn’t before. It’s a daunting situation, but I’m excited by the potential for technology to address the issues.”

PUSHBACK AND ACCEPTANCE
As the use of biotechnology becomes prevalent, another challenge is ensuring that public acceptance keeps pace with the progress. Some countries are more willing to adopt it than others, with pushback occurring in parts of Europe on aspects like genetically modified produce. In July, the Court of Justice of the European Union ruled that products created by gene editing technologies such as CRISPR will be subject to the same approvals process as GMO products. In North America, though, the resistance may be fading.

“Most of the public has either accepted it or is unaware of it,” said Rozwadowski. “The vast majority of Canadian canola is genetically modified, and people still consume canola oil. The same is true of most soy meal used in feed and food products, as well as corn and many processed food items. Most cotton is genetically modified and you still see Levi’s jeans and cotton shirts wherever you go. These products are out there in the North American marketplace and there’s no big resistance; people continue to buy them.”

There’s also an argument to be made that with any new technology, people fear what they don’t understand. “I think most of the concern over things like GMOs is driven by a lack of knowledge,” said Casey. “Science tells us there is no evidence of any negative impact from genetically modified produce, so we need to go with the science on this. The 100-Mile Diet [a commitment to eating only foods grown within 100 miles of one’s home] is fine here in Ottawa where people have good incomes and ready access to fresh food, but it’s less practical in parts of Africa and India. We must devise new ways to grow food using fewer resources, while having less impact on the environment. Ag Bt offers that promise, and it behooves us as a society to address those challenges by going in this direction.”

Embracing the technology may still involve a leap of faith, but many would say there’s only one thing scarier than taking that leap: not taking it.

GENOME:
All the genetic material in all the chromosomes of a particular organism.

INSECT-RESISTANT CROPS:
Plants with the ability to withstand, deter or repel insects and thereby prevent them from feeding on the plant.

SELECTIVE BREEDING:
Making deliberate crosses of organisms so the offspring will have desired characteristics derived from one or both parents.

TRADITIONAL BREEDING:
Modification of plants and animals through selective breeding. Practices used in traditional plant breeding may include aspects of biotechnology such as tissue culture and mutational breeding.

TRANSGENIC TECHNOLOGY:
The introduction of new and functional genetic material into an organism.

November 14, 2018
Markets are dynamic. In theory, prices are determined where supply and demand intersect—where the value that someone is ... More
Prev Post RE-EXAMINING TILLAGE
Next Post SIGNED, SEALED AND DELIVERED 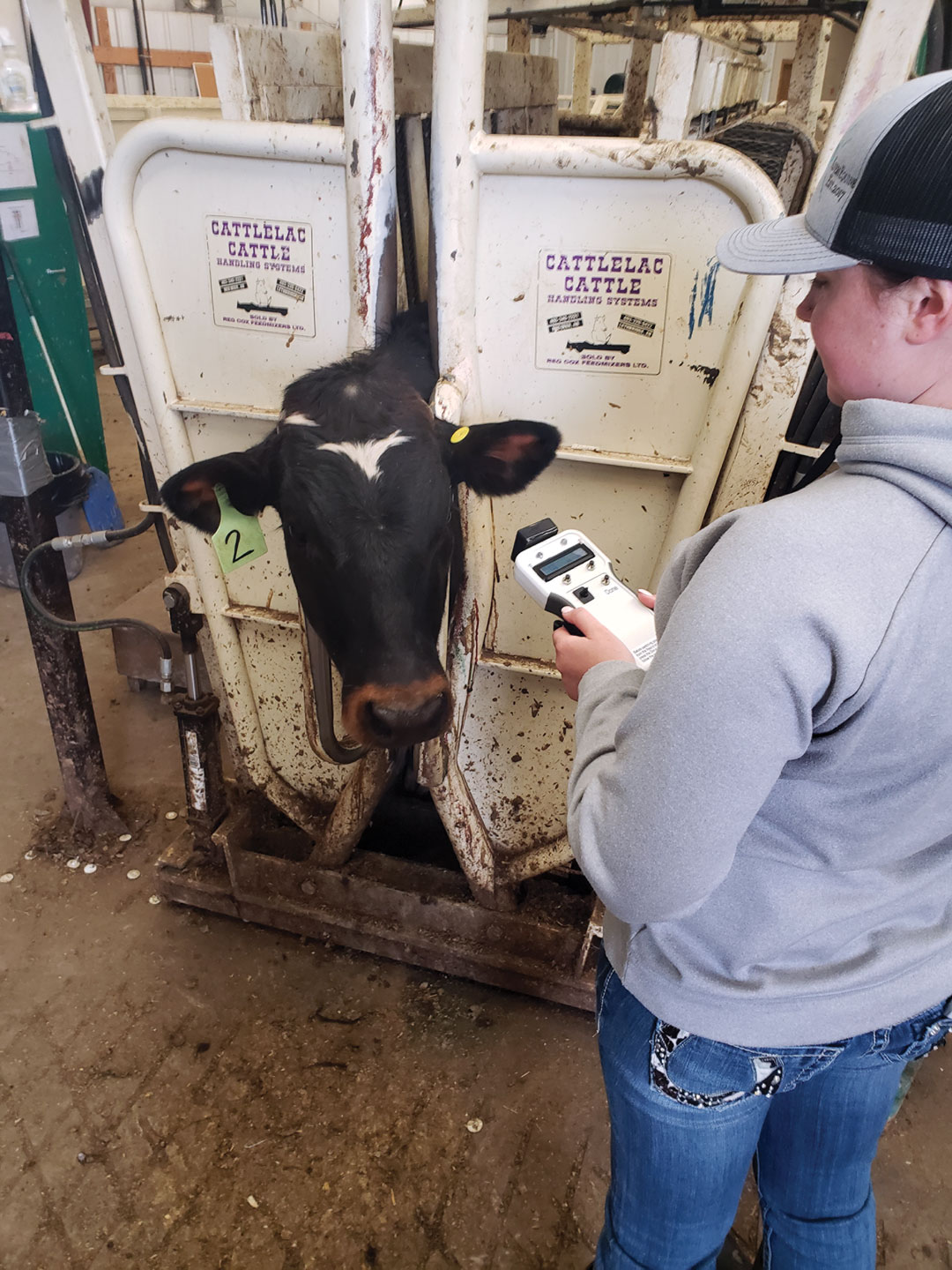