For brothers Don and Stephen Sendziak who grow pedigreed seed near Thorsby, results in the field say it all. And that’s why they’re excited about AAC Crossfield, which, along with AAC Entice, are two varieties recently produced by the 4P Canada Prairie Spring Red (CPSR) agreement. Launched in 2015, 4P, which stands for “public, private and producer partnership,” includes Agriculture and Agri-Food Canada (AAFC), Canterra Seeds and the Alberta Wheat Commission (AWC). The pact is aimed at improving CPSR varieties. “We picked Crossfield because all of its attributes indicated it was hands-down the best yielder compared to other CPS check varieties,” said Don.

IN SEARCH OF SUPPORT
When federal CPSR breeder Stephen Fox retired, funding was not available to rehire his position. A decision was made to move the genetic material from Winnipeg to the Lethbridge Research and Development Centre. It was there that Harpinder Randhawa consolidated the centre’s breeding program to focus solely on Soft White Spring Wheat (SWSW) and CPSR.

Once the genetic material had a new home, the focus was on how best to develop it and create varieties of interest to farmers. That process would require expertise, funding and forward thinking, leading to a comprehensive partnership spearheaded by George Clayton, then executive director of partnerships with the science and technology branch of AAFC.

“The first thing that appealed to AAFC was the idea of partnering with other organizations that bring complementary strengths,” said Dr. François Eudes, research scientist with AAFC.

To take that idea from concept to creation, AAFC issued a request for proposals (RFP) to private sector companies in February 2014. AAFC sought a partner that could license and distribute varieties, return high quality data and offer plot work, quality testing and additional funds.

That RFP attracted a perfect partner in Canterra, one of Canada’s leading seed companies and one with significant farmer ownership. Apart from contributing funds, the company brought expertise and its field testing program to the alliance.

Before the deal between AAFC and Canterra was finalized, the government agency asked its new partner if it was open to adding a third party in light of the interest from some farmer groups in such an arrangement. Canterra consented and, seeing the value of this collaboration for its members, the AWC—under the leadership of then chair Kent Erickson—agreed to provide additional funding.

“I really give guys like Tom Steve [AWC general manager] and George Clayton great credit for being visionaries and understanding the value of these partnerships,” said Dave Hansen, Canterra president and CEO.

“This type of investment was one of the first within the wheat industry in that it was a joint funding effort among farmers, government and a private seed company,” said Lauren Comin, AWC research manager. “AWC stakeholders see it as a for-farmer, by-farmer investment that leverages their levy dollars with those of a seed company and the federal government. It also brings them new technology and seed advancements that make sense on their farms.”

FROM INPUT TO OUTPUT
AAFC sees great potential in this collaboration. “We are listening to all inputs from Canterra and AWC and using it in the process of developing varieties for Canada,” said Eudes. “This is helping us to have a science program that is more connected with the needs of industry and it makes our science and breeding program more relevant.”

The 4P is a game changer for all the right reasons. As the first accord of its type, it has blazed a trail for the wheat industry and prompted the signing of a similar pact involving the Saskatchewan Wheat Development Commission, SeCan and the University of Saskatchewan.

4P has also prompted discussion about how farmers can have more involvement in breeding programs to help steer the direction and provide capacity for better varieties to be released sooner.

Overall, the 4P has been integral to the development of the Lethbridge Research and Development Centre CPS breeding program, increasing its capacity for agronomic, disease and quality testing. This has improved delivery of enhanced genetics to Alberta wheat farmers. AWC will receive a share of royalties for lines developed under the program, which will then be re-invested in public breeding programs.

While the partnership is worth $3.4 million over five years, having the entire value chain at the table from early breeding stages through to commercialization is priceless. Most importantly, the deal has produced new CPS varieties for farmers. Following seeding plots conducted in 2018, Crossfield and Entice will be fully commercialized in 2019, to be distributed by Canterra and Proven Seeds, respectively. 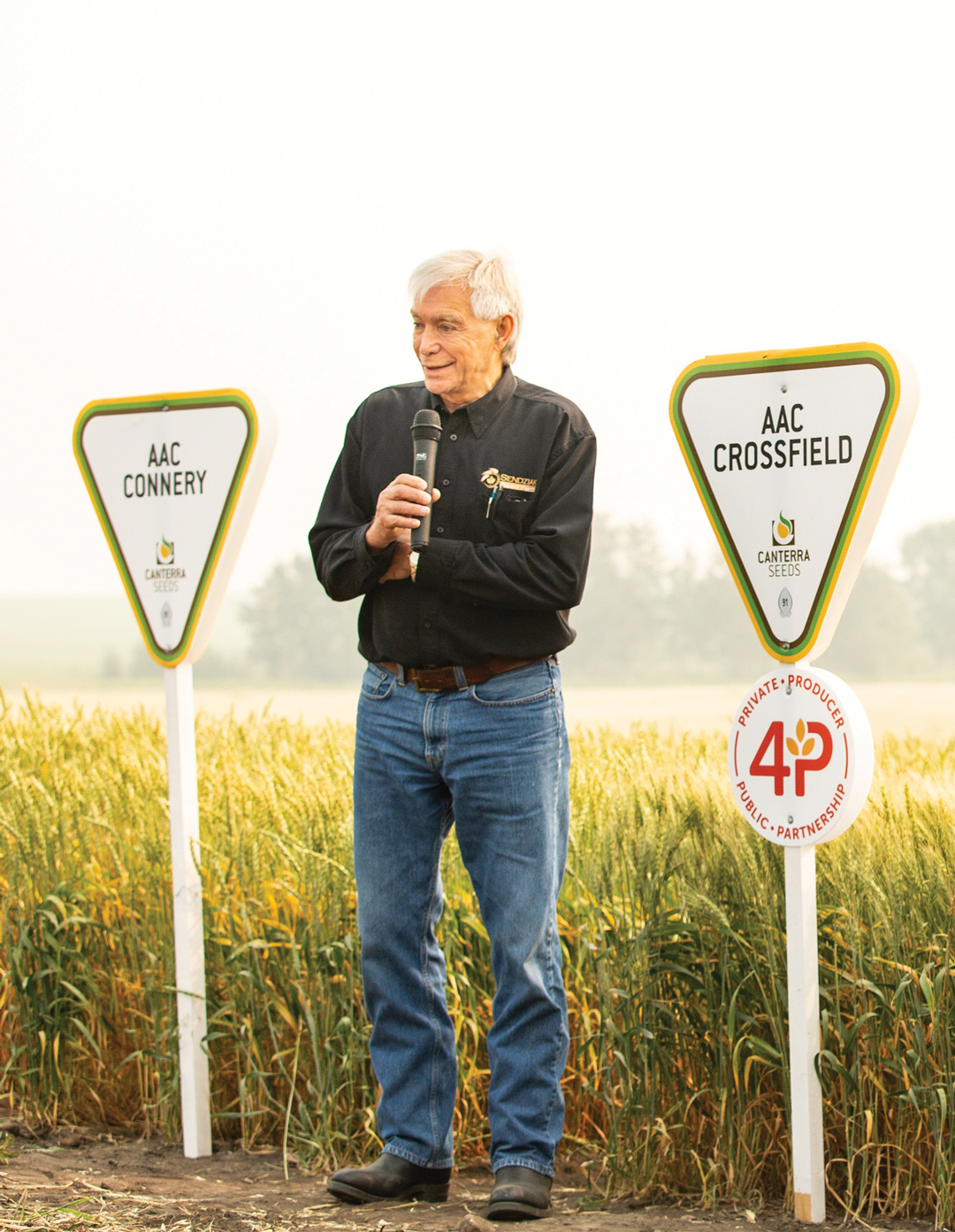 FIELDING OPINIONS
Though it’s early yet, initial reviews of the two varieties’ performance have been promising. When the Sendziaks tested Crossfield last year, despite not seeding until June 5 and harvesting early to beat impending frost, it yielded 77 bushels per acres and prompted strong demand when sold as pedigreed seed. This season, their area was challenged by lack of moisture through June and part of July, but Crossfield rose to the occasion.

“It looks great in the field,” said Don. “Usually, if there’s a deficiency of moisture in your topsoil, the CPS varieties won’t perform as well, but this looks just as good as our hard reds. It also has the latest disease resistance package available for a wheat variety, so that’s another big selling point.”

These results have certainly sold the Sendziaks on the value of 4P. “When you have private industry, the public sector and producers all striving to get the best attributes out of our varieties, it’s a big positive for the research program,” said Don.

It’s a sentiment that is shared by all parties to the agreement. “I’d like to see how we can go even faster and do more,” said Hansen. “Let’s look at what we need from a strategic perspective to ensure long-term success. This is a new model for the industry and others are watching. It’s all about the ability to partner with the right people who have the right philosophies and mindsets, and the rest will be proven out in the results we get.”

January 4, 2023
The job of an agricultural analyst is to have an opinion on every topic and an answer for every question. And most of us... More
Prev Post EDUCATIONAL OPTIONS
Next Post AN AGRICULTURAL COLLEGE IS BORN 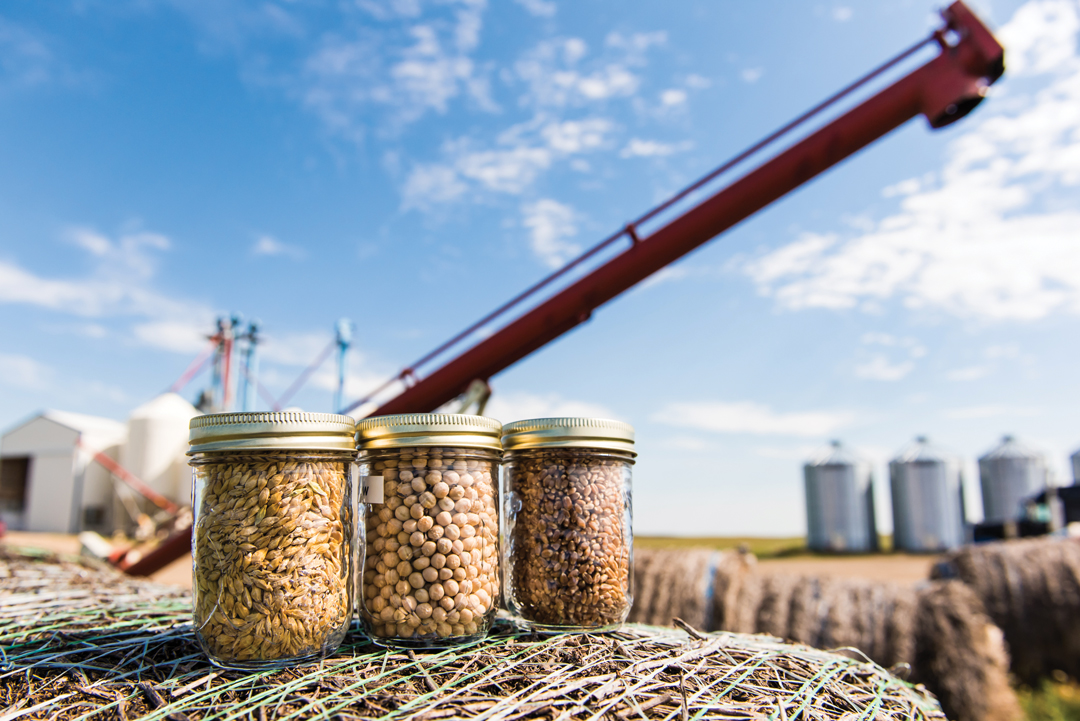