Wheat and barley research has improved by leaps and bounds under the Growing Forward 2 agriculture policy framework—specifically, thanks to the AgriInnovation program and its associated research “clusters.” The program is focused on research and development activities that bring innovation to the sector and bring new varieties of wheat and barley to commercialization. The five-year program will end on March 31, 2018, and a new program is expected to kick in as part of Growing Forward 2’s successor on April 1, 2018, but details have yet to be announced.

According to Garson Law, former research manager for Alberta Barley and program manager of the Growing Forward 2 AgriInnovation cluster for barley, each cluster is a grouping of related scientific projects. The clusters fit into groups of themes, and multiple projects can fit into one cluster.

“They’re meant to develop regional and national teams. They’re meant to generate or build collaboration among scientists, like in a region such as the Prairies, or nationally. That’s been largely successful in speaking with scientists who are part of a cluster,” said Law. “The connections that they’ve built across the country have been very helpful, so they’re looking forward to doing more of the same in the next cluster.”

The current barley cluster includes projects from Alberta to Prince Edward Island, and Law expects that the next cluster will expand to include additional research scientists in Quebec, Ontario, Manitoba, Saskatchewan and Alberta. The barley cluster under the new policy framework will likely expand the program and create even stronger networks of cereal researchers that will be more efficient and effective, with a greater degree of collaboration.

The AgriInnovation program is extremely important, and represents a huge financial investment from the federal government, the provincial government and producer groups across the Prairies. The total program funding for the barley cluster is $12 million, $8 million of which came from the federal government, with the remainder coming from producer groups and the province. The total program funding for the wheat cluster is $25.2 million, with $12.7 million coming from the Alberta Wheat Commission (AWC), the Western Grains Research Foundation (WGRF) and the Canadian Field Crop Research Alliance, and the remaining $12.5 million coming from the federal government. Additionally, in 2015, AWC partnered with several producer and industry groups to fund 11 winter wheat research and development projects, with matching funds provided through the AgriInnovation program. In this case, the total investment from all partners of $2.2 million is spread out over four years.

AgriInnovation under Growing Forward 2  has been beneficial to wheat and barley breeding programs because it’s brought both producer and private funding into the mix.

“It’s primarily producer and public funding, but in specific cases, there is some private interest also. It’s a Canada-wide program approach for funding wheat and barley development. And it really provides core program funding,” said Garth Patterson, the Saskatoon-based executive director of WGRF. 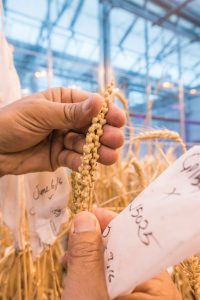 The AgriInnovation program has made a major difference in the lives of cereal breeders, said Harpinder Singh Randhawa, spring wheat breeder at Agriculture and Agri-Food Canada’s (AAFC) Lethbridge Research and Development Centre. “We work as collaborators, and this fosters more collaboration between universities and AAFC and other institutes,” he said. “This helps us to pool our resources and enhance our capacity.”

The cluster program enables both AAFC and other industry groups to leverage funds from each other. Overall, the program has helped industry leverage up to three times the federal funding from private sources by acting as a catalyst for applied research. The program is driven by the industry, and allows research to be prioritized according to sector and producer needs. More than 415 applications have gone through the AgriInnovation program since its inception. The results have been overwhelmingly positive.

The wheat cluster includes 50 research projects and has developed new varieties that have higher yield, quality and disease resistance in all classes. The barley cluster, which includes 27 barley-related projects, has focused on developing more resilient varieties with greater sprout tolerance and shatter resistance in order to withstand excessive moisture or drought conditions. Scientists in the program are also working on other projects, ranging from breeding genetics to agronomy, pathology, food and nutrition.

Stable, long-term funding is crucial for cereal researchers. Researchers like knowing what their sources of funding are, how much they can leverage and how much money they can expect to have.

“Wheat breeding is a long-term process, and you can’t operate with a couple years of money here and there,” said Randhawa. “These are locked, contractual agreements with industry people and AAFC for the five years, which is great. You have certainty that you have budget allocated for the next five years.”

Breeding programs are a continuum, said Pat Juskiw, a barley breeder with Alberta Agriculture and Forestry at the Lacombe Field Crop Development Centre (FCDC). She uses AgriInnovation funding for her malting barley breeding program at the Centre.

Many research programs, including those focusing on malting barley breeding, are long-term games that require long-term funding.

“From the time you make a cross until the time it gets into your beer bottle, it will be 15 years,” said Juskiw, although Juskiw and other breeders are working hard to get that number down to 10 to 12 years.

Jennifer Zantinge, an Alberta Agriculture and Forestry research scientist and molecular geneticist specializing in wheat, barley and triticale at the Lacombe FCDC, said the cluster approach has fostered collaboration between different groups of researchers that might not otherwise interact. “When I look at it as both industry and research, academic research is more academic, and ours is more applied,” she said.

In research, there is often a missing link. Academic researchers might do a lot of gene sequencing, but then it takes investment for applied researchers to use those markers in their breeding programs. The clusters help focus the research, identify what work is needed and encourage various groups to work together. Academics can focus more on general knowledge, and then applied researchers take that research and tailor it to things producers need on their farms.

Now all groups within the research community have a better understanding of what the other players are working on, and there’s improved communication between the sectors. 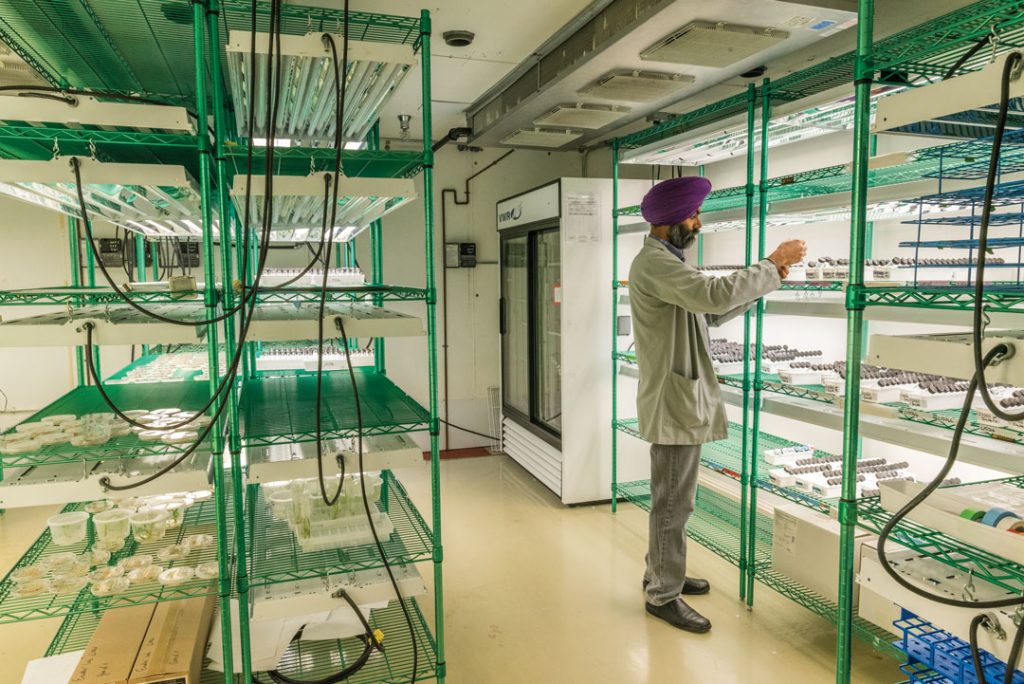 The AgriInnovation program is currently working well under Growing Forward 2 , but things weren’t always as straightforward.

“It took a long time to put all these collaborators’ agreements in place, so pretty much one year we ran without funds because we were still dealing with all these agreements,” said Randhawa. “But I am sensing the problem is solved now.”

He doesn’t think that problem will occur under the new policy framework either, since there have already been meetings and consultations about the transition. “They’re starting a couple years earlier,” he said.

When the clusters originally began, there were some administrative problems, and different researchers and levels of government struggled to maintain connections and report back on projects. However, the bugs in the program have been fixed, and some of the processes could be further streamlined in the next cluster, reducing administrative hurdles.

The new framework is expected to encompass most of the core activities currently taking place, while providing for new innovations. There will also be new priorities and a new direction set forth by the federal government.

“These will be part of the conversation between those priorities and the needs of producer groups like ourselves, and commercial entities that will have an opportunity to put together a cluster that will be a benefit to everyone,” said Law.

The exact specifics of the new policy framework and AgriInnovation cluster programs have not been revealed, but an announcement is expected in either May or June 2017.

“Not having seen what the program will consist of, or what the program pillars will be, we’re working on what we believe will be the major pillars that make up the bulk of the next framework,” said Law.

There have been a number of positive signs at AAFC, including the hiring of replacement personnel for scientists who have retired recently or who are planning to retire, in order to ensure the transition to the next framework is as smooth as possible.

The research sector put out a call for letters of intent in January. The Barley Council of Canada, for example, has already gathered research proposals from potential funders for the next cluster. Many of these funders were not included in the previous cluster, or were not in existence when the cluster formed. Research priorities have already been discussed, and funders have met to discuss potential projects, as well as a national research strategy for barley. Wheat cluster preparations are also underway, involving all participants in the current wheat cluster, as well as the Saskatchewan Wheat Development Commission and the Manitoba Wheat and Barley Growers Association.

“There are a lot of changes on the management or administrative side based on how difficult it was for the managers to manage the clusters this time around,” said Law.

Juskiw has other concerns about the transition to the new framework and how it could impact ongoing and planned crop research. “I guess when you transition to a new framework, you always worry about what the level of funding and reporting will be, and what the reporting requirements will be. That’s pretty much administration,” said Juskiw. “There are always concerns, and we know we need to be accountable.”

When a new funding framework is on the horizon, researchers often worry about whether the level of research funding will be enough to do everything that needs to get done. However, if the new framework takes into account the continuous nature of breeding programs, the transition should not be an issue, according to Juskiw.

The current Liberal government has different priorities than the previous Conservative government, which was responsible for Growing Forward 2 , and many stakeholders are expecting those differing priorities to be reflected in the new program.

During consultations about the new policy framework, industry stakeholders recommended that the AgriInnovation program have increased flexibility for funding recipients when it comes to allocating money, and increased transparency and timely decisions in the project approvals process, said Patrick Girard, a spokesperson for AAFC, via email.

The government has conducted consultations for the next policy framework, and has identified that knowledge dissemination and technology transfer should be a priority, along with communicating the results to the industry. In the next policy framework, federal, provincial and territorial governments will continue to focus on science, research and innovation to support the sector, said Girard. The first phase of consultations began in January 2016 and more than 300 industry groups were involved, while the second phase of consultations ran between July and November 2016, when members of the Canadian public were invited to share their views.

The five-year approach allows research to continue without any funding gaps. When there are gaps in funding, it can be detrimental to individual projects, or to entire areas of research.

“Federal, provincial and territorial governments are working hard to develop the next policy framework and have committed to continuous programming,” said Girard.

March 3, 2017
As a 2017 Nuffield Canadian scholar, I am about to embark on what will no doubt be the journey of a lifetime. I couldn’t... More
Prev Post GLOBAL GRAINS
Next Post HERE COMES THE SUN 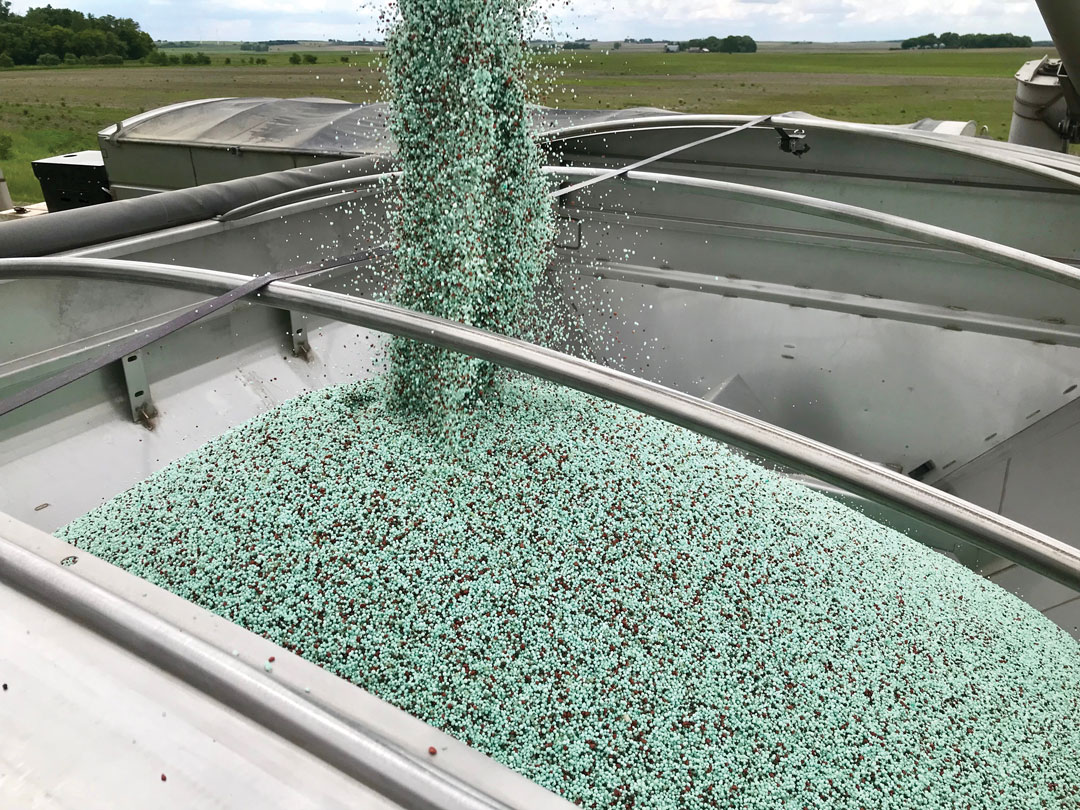