Steve Larocque has a problem. “Our frustration at the moment is that we haven’t noted any telltale symptoms in our grain, but DNA tests sometimes come back positive for Fusarium,” he said.

He wanted to do the right thing, so he sent in another sample to get a quantitative result, because the DNA test only told him that Fusarium graminearum was present, not to what degree. “We [took] another sample from the same bin, and it [came] back negative,” he said. 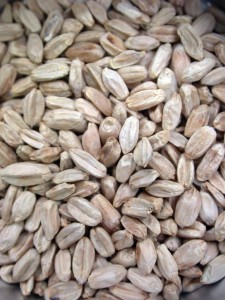 What’s a farmer to do?
It’s a serious question for all grain producers as they watch the slow, westward march of Fusarium head blight (FHB), the disease caused by the Fusarium graminearum pathogen, and want to keep it off their farms.

For Larocque, answering that question goes beyond his own Three Hills–area operation. As owner of Beyond Agronomy, an independent crop consultancy, he has roughly 70,000 acres under his care. “I look at the DNA tests as a warning sign,” he said. “It’s kind of like waiting for the hammer to fall—when conditions are right, FHB is going to happen.”

Mike Harding agrees. A research scientist at Alberta Agriculture and Forestry’s Crop Diversification Centre in Brooks, Harding is heading up a two-year Fusarium graminearum survey of Alberta, beginning this year. “Fusarium graminearum is a unique problem,” he said. “It’s very difficult to manage, and it can affect the bottom line in three ways: yield loss, downgrading and market acceptance.”

Getting a handle on the situation
While certain wheat varieties have some tolerance to FHB, there is only one with full resistance, Canterra’s AC Emerson, so producers must manage for the disease in order to meet quality standards. And those standards are high, because deoxynivalenol (DON), the mycotoxin produced by FHB, is harmful to human and animal health, and can render a crop unsellable.

“Customers are expecting a certain quality in our grain,” said Daryl Beswitherick, program manager, quality assurance standards and reinspection, for the Canadian Grain Commission in Winnipeg. “All shipments of grain leaving Canada must be inspected by the Grain Commission so we can ensure the shipper is getting what they’ve agreed to buy.”

Canada’s official grading guide sets out FHB limits for all classes of wheat and cereal grains, and they are low. In Canada Western Red Spring, for example, which accounts for over half of the wheat grown in Canada, No. 1 can have no more than 0.25 per cent Fusarium-damaged kernels. No. 2 is 0.8 per cent, and No. 3 is 1.5 per cent. In malting barley of all stripes, it’s even lower at 0.2 per cent.

Beswitherick said that the average FHB level in Canadian shipments has remained relatively stable over the last few years. “It hasn’t grown by leaps and bounds,” he said. “But it does fluctuate from year to year, and we are seeing it move west. Farmers in Alberta should definitely try to keep it out if they can—if you talk to Manitoban producers, a lot of their grain is downgraded because of FHB.”

The results of Harding’s survey will help Alberta growers get a clearer picture of the state of FHB in the province. It builds on earlier surveys done in 2001-03, 2005 and 2010-11.

The new survey is extensive. Ag fieldmen and Alberta Agriculture and Forestry staff will randomly select 900 fields across all cereal-growing regions and take 500 heads from each one. The heads will then be dried, threshed and sent to the Canadian Grain Commission to be tested. “The lab tests will determine the Fusarium strain, if there is one, and the amount of toxin,” said Harding.

He said that past surveys have revealed a pattern. “Fusarium graminearum is easy to find on wheat and corn in the irrigated areas of southern Alberta. That’s not to say it’s wall to wall, but generally speaking, it’s well-established there,” he said. “North of [Highway 1], it’s more difficult to find. So it’s there, but [it] may not be permanently established just yet.”

But lab tests reveal a troubling change in the pathogen itself. Harding explained that, as with any biological organism, Fusarium graminearum is subtly adapting by developing a new chemotype—one that is a more aggressive pathogen and produces a higher level of DON. “One of the biggest reasons this survey is so important is to track these types of changes,” he said.

Of the current survey, Harding said he doesn’t expect to see much change in southern Alberta. “But we’ve been hearing that seed-testing labs are finding higher levels of seed-borne Fusarium graminearum in other parts of the province as well,” he said. “We don’t know yet if that means it’s becoming more common elsewhere, but it wouldn’t come as a terribly big surprise, because the pathogen is certainly capable of expanding to all cereal-producing areas of Alberta. We would like to prevent that, or slow it down as best we can.”

How? Most producers already know the basics—not planting infected seed, using certified seed when possible, and minimizing the movement of infected seed and straw. Harding said Alberta’s Fusarium graminearum management plan is a good place for anyone to start.

Larocque said that his positive DNA tests have increased vigilance on his farm and those of many of his clients. “We’re doing a few more acres of split fungicide applications,” he said, adding that this is a precautionary measure, done without evidence of disease being present. “That shift has taken place with the innovative guys—the producers who aren’t worried about spending a bit more to protect their crop.”

He’s keeping a closer eye on the weather too, as historical rain patterns change. “Moisture leading up to and during flowering is cause for concern,” he said. “And the one thing we all need to get right is residue management and seeding for strong emergence and even crop development.”

“We’ve seen this disease move through Manitoba so quickly there really wasn’t anything anyone could do about it,” said Harding. “But, because it’s moving more slowly here, producers have the time to act and react. They will do what they need to in order to protect their grain.”

October 6, 2015
Frederick Sladen, born in England in 1876, was fascinated with bees as a child. At the age of 16, he wrote his first boo... More
Prev Post COPING STRATEGIES FOR DROUGHT
Next Post AGAINST THE GRAIN