The ability of legumes to self-fertilize by fixing nitrogen from the air is well-known. Developing this ability in grains, however, could radically change Canadian cereal crop production. Such an innovation has the potential to diminish input costs and decrease environmental impact, but making it happen is a complex and challenging task. Alicja Ziemienowicz, a research scientist with Agriculture and Agri-Food Canada’s Lethbridge Research and Development Centre, is working to solve this tricky biological puzzle. While her research began in 2014, and has yielded impressive results, it could be more than a decade from now until we see nitrogen-fixing grains blowing in the wind.

GrainsWest: What is nitrogen fixation in plants?

Alicja Ziemienowicz: Nitrogen fixation is the conversion of atmospheric nitrogen into ammonia. Plants on their own are not able to fix atmospheric nitrogen. However, some plants like legumes benefit from symbiotic interactions they form with nitrogen-fixing bacteria like rhizobia. Rhizobia, a soil-borne bacteria, colonize roots of legume plants. In response, legumes produce nodules on their roots that serve as home for rhizobia and the place where bacteria fix nitrogen and convert it into ammonia and nitrates. Plants receive these inorganic nitrogen compounds from rhizobia and in return supply the symbiotic bacteria with carbohydrates, which provide the energy needed for bacteria to grow and fix nitrogen.

GW: What drew you to study nitrogen fixation in plants?

AZ: Nitrogen fixation is by itself a fascinating process for scientists and an interesting topic for researchers. What attracted me additionally is the idea that it could help us solve the nitrogen problem. Nitrogen is one of three main macronutrients, which means it is required for the growth of all organisms, including plants. The richest source of nitrogen is air—approximately 78 per cent of air is nitrogen—but gaseous nitrogen is inaccessible for most organisms. Therefore, non-fixing organisms have to rely on inorganic and organic nitrogen present in soil or other organisms. However, the amount of nitrogen in soil is insufficient to support intense crop growth and production in modern agriculture without the application of synthetic nitrogen fertilizers.

GW: Your goal is to develop nitrogen-fixing cereal crops. What is the process to make this a reality?

AZ: Our approach is to produce in plant cells a nitrogenase, the bacterial enzyme which catalyzes the conversion of atmospheric nitrogen into ammonia. The research involves direct transfer of bacterial nitrogen fixation (nif) genes into the plant, stable expression of the nif genes in plant cells, and finally regeneration of entire plants from nitrogen-fixing cells.

GW: Have you run into challenges with your research?

AZ: There are several challenges. First, the nitrogen fixation process is governed by a large number of nif genes, around 20 in most nitrogen-fixing bacteria. At least 16 of these genes are essential for production of nitrogenase and its co-factors. Plant biotechnologists usually deliver one or two foreign genes into plant nuclei. We had to develop a system for delivery of at least 16 nif genes.

Second, the delivered genes need to be effectively expressed in the new host. Since gene expression in systems of bacteria and plants differ significantly, we optimized the bacterial genes so they are recognized by the plant gene expression system.

Third, it is not easy to produce active nitrogenase in plants, because the enzyme requires a lot of energy and is sensitive to oxygen. Bacteria usually produce nitrogenase in anaerobic conditions, while plants in contrast are the main producers of oxygen. We decided to generate nitrogenase in plant mitochondria, which naturally serve as energy factories in the cells and have lower oxygen content due to intensive cellular respiration. However, no methods of stable gene delivery into mitochondria were available. Therefore, we developed a technique of DNA transfer into plant mitochondria using special peptides and pollen-precursor cells.

GW: What might be the environmental benefits of cereal crops fixing their own nitrogen?

AZ: First of all, production of synthetic fertilizers is detrimental to the environment. The most common nirtogen fertilizer is ammonium, produced through the Haber–Bosch process, which is a fusion of gaseous nitrogen and hydrogen at extremely high temperature and pressure conditions. This process requires a lot of energy provided by burning natural gas or other fossil fuels and produces CO2, contributing to greenhouse gas (GHG) emissions.

Each year, production of nitrogen fertilizers used for cultivation of the three main Canadian crops—canola, wheat and corn—generates the amount of GHGs comparable to 2 million cars. In addition, plants use only 40 to 60 per cent of the supplied nitrogen fertilizer. The remaining amount either stays in soil, is reduced by denitrifying bacteria or [migrates] to groundwater. Denitrification produces another GHG: nitrogen oxide, or NO2. Although NO2 presents only five per cent of total GHG emission, it has a global warming potential almost 300 times stronger than the same quantity of CO2. Nitrogen fixation in agriculture would reduce the need for nitrogen fertilizers.

GW: What are the next steps in this research?

AZ: Our accomplishments in the generation of nitrogen-fixing triticale cells gives us a strong foundation for hope to successfully create plants with the same feature. Once proven in the triticale model, we plan to transfer the nitrogen fixation trait from triticale to wheat. Furthermore, our research paved the way to the introduction of the nitrogen fixation trait into other crops. We would like to apply a similar approach to other crop species important for Canadian agriculture, such as canola and maize as well as to crops significant for agriculture in other countries through international collaborations.

GW: What impacts will farmers see once your work is ready for
commercialization?

GW: What is your ultimate goal for this research?

AZ: Our invention, once finalized, is the plant of the future. Its creation and commercialization will take many years, however, and we hope by that time the genetically modified wheat barrier will be lifted. Fortunately, agencies funding our research through the Alberta Funding Consortium, including Alberta Innovates, the Alberta Wheat Commission and the Saskatchewan Wheat Development Commission, see the benefits of nitrogen-fixing crops for Canadian agriculture. [They] foresee regulations governing wheat production in Canada may change in the future. Only then will Canadian producers be able to profit from our invention, allowing them to better use arable land and resources and contribute to the increase in agricultural productivity demanded by the growing global population.

November 3, 2022
Does it pass the smell test? In an effort to protect wheat from one of its most virulent pests, researchers are gauging ... More

November 3, 2022
With $1.1 million in industry and government funding, the University of Saskatchewan will soon be home to a brand new, h... More
Prev Post THE BRIGHTEST LIGHT IN CANADIAN AG RESEARCH
Next Post CLEARED FOR TAKEOFF 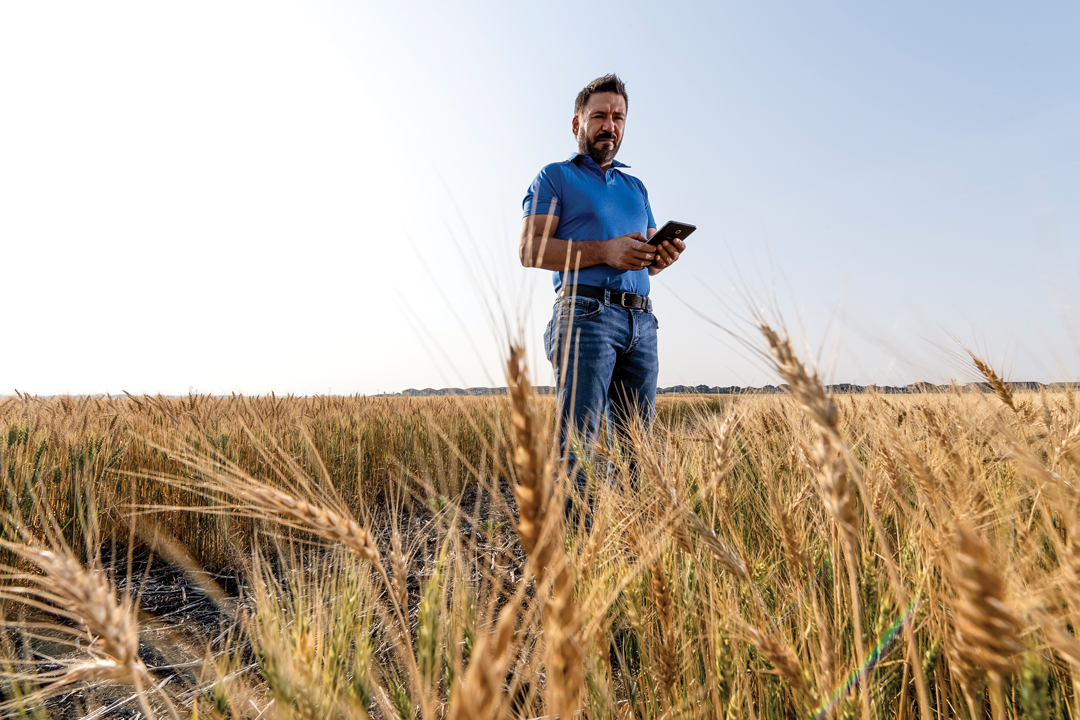