With early snowfalls having impacted harvests in recent years, the time couldn’t be better for Dean Spaner’s wheat breeding program to hit its stride. A University of Alberta professor and plant breeder, Spaner focuses on bringing high-yielding but early-maturing wheat varieties to market. It’s a natural fit for the northernmost wheat breeding program on the continent.

When he took over the program almost 20 years ago, it was all but defunct. Since then, he and his team have registered 10 CWRS wheat varieties with five registered in 2018/19 alone. Spaner’s long-term crew includes research associate Muhammad Iqbal and technicians Klaus Strenzke, Izabela Ciechanowska and Joe Moss.

Teaching numerous courses and supervising many graduate students, Spaner’s contribution to Alberta agricultural research is impressive. Two of his varieties, Parata and Go Early, were registered in 2015 and are now available as certified seed. According to Spaner, these varieties are among the quickest maturing CWRS available, and this comes with minimal yield sacrifice.

“There’s a correlation between higher yield and longer maturity,” said Spaner, noting that yield and maturity can also both be highly dependent on location and season. “Parata is about five days earlier than Carberry [the check variety], and the seed guide says it will yield 97 per cent of Carberry, but in some areas, it will yield the same.” 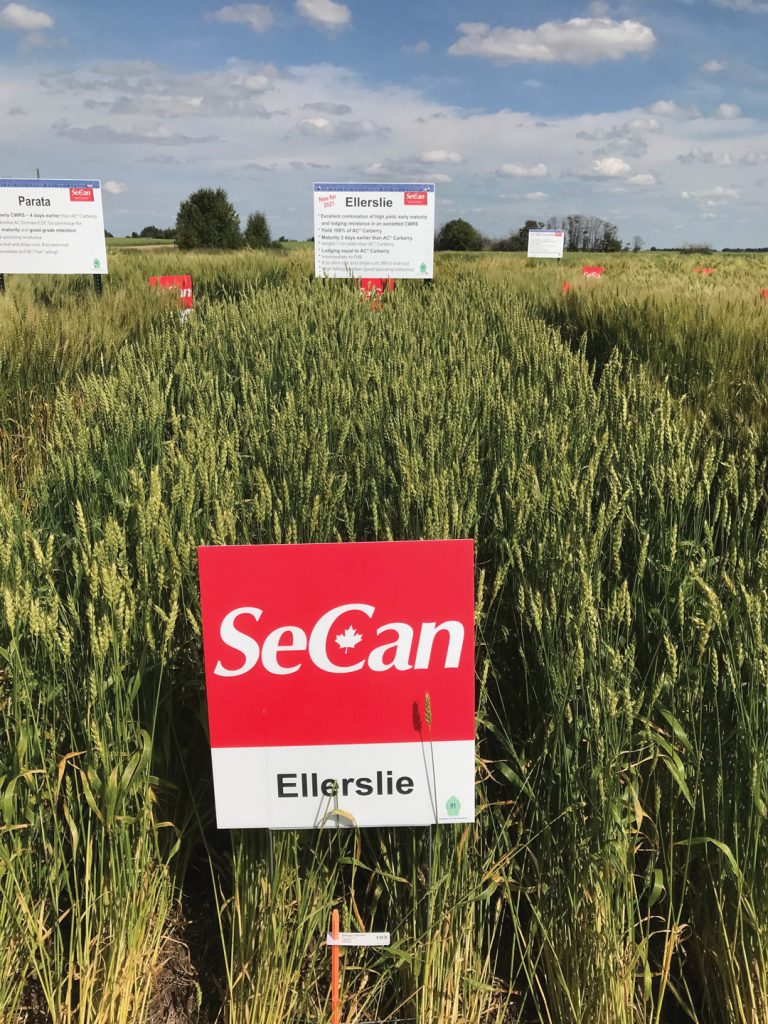 SeCan distributes Parata and Ellerslie, both of which were developed at the university of Alberta. Pictured at the top of the page, wheat breeder Dean Spaner (left) inspects plots with SeCan research and development manager Jim Downey.

Wheat farmers will have to wait for the latest of Spaner’s varieties. Registered between November 2018 and March 2019, varieties Ellerslie, Jake, Tracker, RedNet and Sheba are being multiplied by seed growers for at least the coming growing season.

SeCan distributes both Parata and Ellerslie. According to Jim Downey, SeCan manager of research and development, Ellerslie “should yield about six per cent better than Parata with maybe similar or slightly longer maturity and quite a bit stronger straw.”

Jake and Tracker, the two earliest yielding varieties of the new cohort, are licensed to Canterra Seeds. The company had regional success with Thorsby, one of the first varieties Spaner registered. According to Colette Prefontaine, pedigreed seed territory manager for Canterra Seeds, it performed well in Alberta’s Peace Region.

“With Thorsby, the farther north you go, the bigger the heads got relative to other varieties,” said Prefontaine. Thorsby’s downfall—literally—was poor standability. But Prefontaine sees Spaner making improvements in this area.

“The standability on his varieties is getting better and better,” said Prefontaine. During the 2019 growing season, Jake yielded better than Tracker in both plots and field-scale testing. It also matured earlier. A small plot of Tracker was harvested last fall at La Crete, but a plot west of Carstairs was snowed under. “It seems to be more favourable to lengthened daylight and increasing the yield that way,” said Prefontaine. This is welcome news for farmers around Edmonton and points north.

These new varieties aren’t strictly for northern growing regions. SeedNet, a company owned by several southern Alberta seed growers, is marketing RedNet and Penwest Seeds of Three Hills holds the rights to Sheba. These varieties are medium maturing and have additional attractive attributes. RedNet has the best Fusarium head blight resistance rating of the group, complementing the strong rust resistance of Spaner’s varieties.

According to Larry Penner, owner of Penwest Seeds, Sheba is an awnless
variety with excellent yield potential. Having grown it in 2018 and 2019, he also found it to be easier threshing than other awnless varieties he’s produced.

Penner believes the variety could be a good fit across Alberta and into southern Saskatchewan. “I’d like to see it east of the Red Deer River in Alberta,” he said. “It’s a little taller but it has great yield potential.” 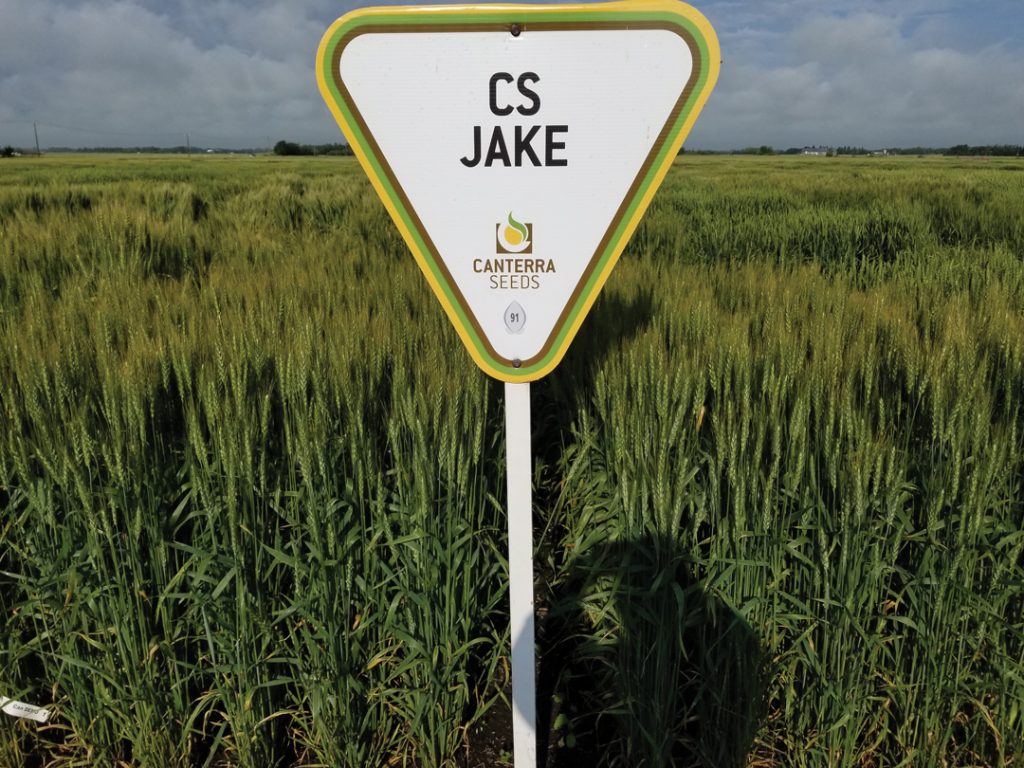 Also developed at the University of Alberta, the Jake and Tracker wheat varieties are licensed to Canterra Seeds.

“Being a university, we can play around so we can make upwards of 200 crosses per year and have all sorts of weird genetic variability on the go,” said Spaner. The global germplasm brings genetic diversity and often strong resistance to rust diseases, but they usually do not meet the quality parameters for the CWRS class. Occasionally, the results are surprising, as in the case of Zealand, a cross of Canadian and world germplasm that met the standards of the CWRS class. With its height and large leaves, the variety thrives on organic land. “Zealand has hyper-competitive ability,” said Spaner. “It can out-compete weeds.”

Graduate student projects have a symbiotic relationship with plant breeding. One year, a student examined the genes of all western Canadian wheat varieties, scoring them for rust resistance, height and maturity. This data helped Spaner choose suitable parents to cross in his breeding program.

Spaner believes training such young scientists is crucial.
“We try to do a service to the farming community, both in terms of developing varieties that could be useful and developing scientists who could be even more useful,” he said.

This focus on the future is central to Alberta Wheat Commission (AWC) support of the breeding program. “Dr. Spaner has a notable strength in training graduate students who will be our future breeders and agronomists,” said Lauren Comin, AWC research director. “We take this value into consideration when making funding decisions and rate it as equally important, if not more so, than the varieties developed.”

Financial support for the program has been supplied by AWC, the Saskatchewan Wheat Development Commission, the now-defunct Alberta Crop Industry Development Fund, the
Alberta government and National Sciences and Research Council of Canada. Since 2014, AWC has contributed $2.5 million to the program, with more farmer-derived funds to be committed in 2021.

According to those in the seed industry, this is money well spent. “I’m interested to see Dean succeed and have more resources and recognition,” said SeCan’s Downey. “There’s potential to really improve his resources and efficiencies to produce good varieties.”

January 4, 2023
The job of an agricultural analyst is to have an opinion on every topic and an answer for every question. And most of us... More
Prev Post A MESSAGING WIN FOR AGRICULTURE
Next Post ALBERTA IRRIGATION SYSTEM DELIVERS MUCH MORE THAN WATER