WEED-TARGETING TECHNOLOGY ANOTHER STEP IN THE SENSOR REVOLUTION

Last summer, I found myself transfixed by a video of a new sprayer technology called WEEDit. The system has the potential to reduce herbicide use by 85 per cent, saving farmers money or making it more cost effective to use higher-strength products to combat control-resistant weeds. With the world closely watching agricultural practices, WEEDit has the potential to demonstrate farmers’ commitment to applying the minimum spray required to maintain the highest productivity.

Developed and commercialized by Dutch company Rometron, WEEDit relies on pulse width modulation technology. Its sensors, placed at one-metre intervals along the nozzle boom, focus a red LED light that pulses 44,000 times per second on the ground 65 centimetres ahead.

When the light hits green plant material, it causes the chlorophyll in the leaf to phosphoresce. This process emits a faint, near-infrared light that is picked up by the sensors. A signal is then transmitted to a solenoid, causing the spray nozzle to open, precisely targeting the plant. If no further signal is detected, the nozzle closes after five nanoseconds.

Each sensor is divided into five channels that individually survey a 20-centimetrewide strip and control one of five spray nozzles. This ensures that the system accurately surveys the ground it passes over. A full 36.5-metre system consists of 36 sensors and 180 spray nozzles.

Importantly, the pressure at each nozzle remains consistent regardless of speed. Touted as being able to work effectively at up to 25 kilometres per hour, the system doesn’t hinder sprayer efficiency. As well, the technology works for pre-seeding and post-harvest burndown, as it will spray any green material.

Travis Albrecht farms near Schuler, and was the first owner of a WEEDit system in Canada. He saw the system in action on the Facebook page of an Australian farmer. Initially developed for hot-water weed control on Europe’s cobblestone streets, the system was first used for agricultural purposes in Australia and South America before coming to North America. Albrecht retrofitted his John Deere self-propelled sprayer and saw dramatic reduction in his herbicide use in 2017. After harvest, he loaded his tank with water and glyphosate to determine how WEEDit product usage compared to blanket spraying.

“We should’ve been empty at 87 acres, and we were spraying consistently over 700 acres,” said Albrecht. That’s one-eighth the amount of chemical used, or an 87 per cent reduction. On a 2,500-acre farm, spraying one litre per acre of glyphosate at $6.50 per litre, that’s a saving of over $14,000. This might allow money to be budgeted for a tank mix that better controls problem weeds such as glyphosate-resistant kochia or Canada thistle. Along this line, Albrecht added Lontrel, a herbicide that normally costs him $20 per acre, to his tank mix.

Although crop protection products are fairly inexpensive, Albrecht believes this will change. “There will be some new chemicals that they’re going to come out with, and instead of being $5 to $6 an acre, it’s going to be $10 or more, which is going to make this technology even more valuable.”

Last fall, Albrecht conducted WEEDit demonstrations using water-sensitive paper to assess spray coverage. The system is guaranteed to sense weeds as small as one centimetre square, and Albrecht said even weeds half that size triggered the nozzles. As well, the WEEDit monitor allows the operator to adjust the margin to spray from 10 to 50 centimetres on either side of the weed to compensate for wind drift.

Sprayer technology specialist Tom Wolf attended a demonstration in Saskatchewan and describes the equipment as “future ready.” “I think we are about to enter a sensor revolution in ag,” said Wolf. “Our ability to identify areas that should be treated in a different way is going to get easier. A system like [WEEDit] is perfectly positioned to prepare us for an in-crop, weed-detecting algorithm.” That is, in future, such a system would be able to spray only the weeds within a standing crop.

Some questions remain as to how the system would work with residual chemistry often used in pre-seeding spray applications to control weeds that emerge along with crop seedlings. Spot spraying would not produce uniform residual activity, Wolf pointed out. “It leads people to think about other things like having more than one tank or having direct injection of chemical,” he said. “You might have one mode of action broadcast but have one mode of action triggered by weed sensing.

You can get really creative with this.” WEEDit does have an option to spray one rate continually while another rate is programmed for weeds. For example, in the spring, Albrecht set his system to spray at a 30 per cent rate that increased to a full rate when the sensors detected a weed.

At a time when agricultural practices are increasingly scrutinized, Wolf sees the optics of spot spraying as benefiting the industry. “If we as ag professionals wanted to show a non-farming person some of the cool things that are happening in ag, this is a must-see. It makes so much sense to not do a broadcast spray if you have the power to spray each weed separately.”

Albrecht offers an installation package for $170,000 on a 36.5-metre boom sprayer. This includes a new wet boom, sensors and nozzles (144 for 36.5-metre) as well as transport of the sprayer to and from his shop at Schuler.

While retrofitting a sprayer is a significant investment, Albrecht pointed out that it may give farmers more options using existing equipment than they would get for a similarly priced upgrade. Pulse width modulation—a $20,000 to $60,000 option on a new sprayer—becomes standard and works even when WEEDit is disengaged for in-crop spraying. The system allows for turn compensation, matching the application rate to the speed variation along the booms as the sprayer is turning. The booms recirculate unused product during use to maintain pressure, which also allows for continuous-flow rinse-out of product when spraying is completed.

February 28, 2018
Karsten Nielsen took leave from his studies at the University of Saskatchewan to participate in an agricultural work-abr... More
Prev Post ENTERING THE AGE OF INFORMATION AGRICULTURE
Next Post HEEDING THE SEED IMPERATIVE 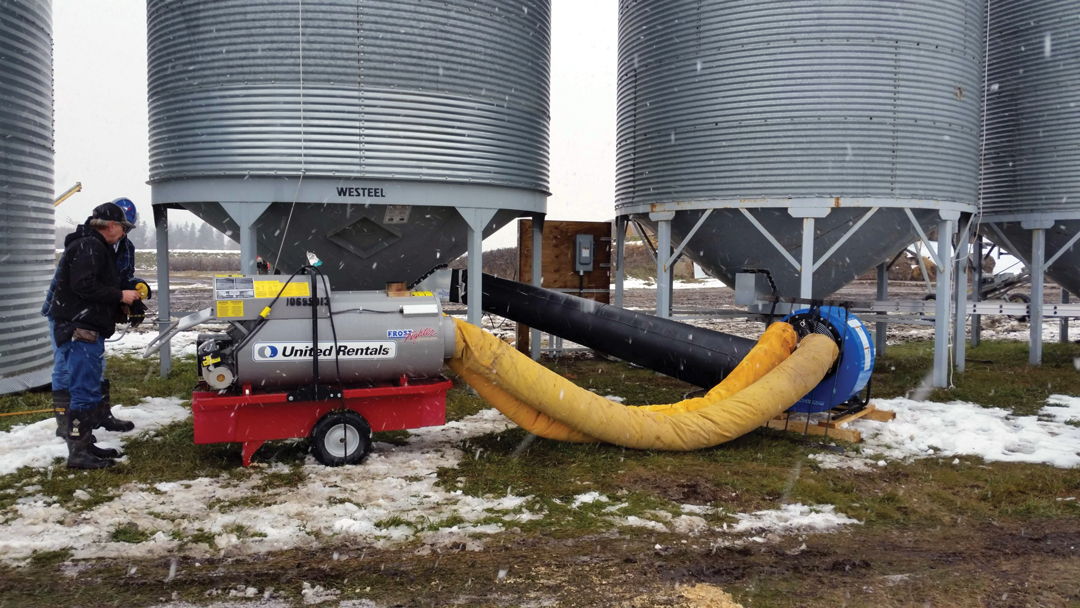