Nearly 38 years after he entered the industry, George Clayton remains fully enamoured with agriculture. From his first position in which he studied soil conservation and no-till to later research on integrated crop management with Agriculture and Agri-Food Canada, Clayton simply loved his work. Even after retirement, leaving the world of crops and soil behind wasn’t an option. He traded one kind of field work for another, and now spends his days, and nights, chasing down the best Alberta farm scenes with a camera. What started as a hobby Clayton practiced in his spare time has turned into a second career as he captures the beauty of Prairie farms.

GrainsWest: How did you get into photography?

George Clayton: I was always interested in photography and, of course, it’s time-consuming, so I couldn’t really do a lot. With film cameras, well, I wasn’t very good either. I had to wait two or three weeks to get my results back, so it didn’t really take off. The advent of digital cameras really changed the game for me, I could look at results right away and my learning curve was much more rapid. When I retired, I was thinking, “I need something to do, I can’t just sit around and do nothing.” I was afraid of that. So, I decided that I would take photography more seriously and obviously I have a love for farmers and agriculture.

GW: Your education and experience clearly influenced you. Why is agriculture your main focus?

GC: I got my book smarts at the University of Saskatchewan but the bigger education was the farmer smarts I got from all my good friends I made in the industry. They taught me more about farming than any formal education, so I really got the best of both worlds. I was fortunate in my first job to be in Fort Vermilion, a very small town, which got me out in the community where I first learned to appreciate farmers and now a lot of them are my friends.

I was a little dismayed with the dialogue going on from urban people and the lack of respect farmers got for their efforts and sustainability when I joined the industry, so I try to focus on that with my photography and give a good image of rural Canada and farmers.

GW: What is your guiding philosophy when it comes to photography?

GC: I shoot anything that’s unique. I look for landscapes that can tell a story. I’m still progressing in that area. It’s a difficult thing to do for a lot of photographers. How do you tell a story in a still image? In trying to do so, how do you identify subjects that are of interest in the frame of the picture? Sometimes you can just see a big, vast landscape and your eye doesn’t know what to look at. I always try to find something I can look at and say yes, that’s the subject.

GW: What do you see as a good subject for a photo?

GC: It’s often abstract layers, a piece of equipment that fills the frame or, for night photography, the Milky Way, incredible stars or a full moon. I shoot the full moon a lot. I focus on night photography and agriculture because there are really not very many people in Canada doing that type of photography, so I’ve got a little niche on my own.

GW: You do a lot of astrophotography, capturing the night sky. How did you get into it, and what was the learning curve like?

GC: Well, the learning curve is still going on. I had a few problems just last night—I set up underneath an irrigation pivot so it wouldn’t get in the way of the camera and the darn thing started turning on. I had to scramble to get out of there before my equipment and I were soaked.

In general, it’s a difficult thing because of the noise—the light from stars—that’s generated. But I’ve learned to use techniques to get rid of the noise. My goal is to get clean, sharp pictures during the night and the challenge is always to get a foreground that’s visible and in focus in the middle of the night when it’s pitch black. So the challenges remain, they don’t seem to go away.

GW: Shooting at night must be an interesting experience. Has anything weird or scary happened on one of these photo shoots?

GC: I only shoot in familiar areas I have permission to be and know who’s there, so I feel safe. The one incident I had, maybe two or three years ago; I was at Writing-on-Stone Provincial Park shooting the Milky Way at about 1 a.m. on a ledge. When shooting, I forgot where I was, went to get a drink of water and stepped off the ledge. I fell about three feet, shook it off and shot [photos] for a while before I left with a friend who was also out shooting. We started going home and I realized I couldn’t find my glasses. We had to turn around and go back to search, finally finding them in a bush that I rolled into after the fall. I was lucky I retrieved them. They were a little crunched, but OK, and I needed to do more shooting the next day. You really have to be careful and stay aware of what’s going on. I just got so focused and concentrated, I completely forgot where I was.

GW: In addition to a being a fulfilling hobby, does photography net you an income?

GC: I’m very fortunate I have clients who want to purchase my pictures. I found a little niche in an area not very many people are filling. I shoot what I like, and if other people like it, they’ll buy it. That’s how I operate. I rarely go out and get a client who says, “it should be this.” I just do it through serendipity and my own planning if necessary.

GW: What is the best photo you’ve ever taken?

GC: Generally, I like my night photos the best followed by the golden hours of sunset or sunrise. One of the best is the one the Alberta Wheat Commission purchased for Gerry Ritz’s Hall of Fame induction. It was a picture of the Milky Way at the Mossleigh grain elevators. I still like that one quite a bit.

GW: What’s your favourite place in Alberta to photograph?

GC: I love every place I shoot in. I hate to pick one over the other, but I do a lot in southern Alberta. I’m also a big no-till advocate and shoot a lot of no-till fields so if I see crop and stubble, I’m very happy.

GW: Where would you like to shoot in the future?

GC: I really want to get to the Palouse region in the U.S., just south of Spokane and on the eastern side of Washington State. It’s an incredible farming region with lots of hills and abstract farms in the fields. I’ve been wanting to go there for about two years now, so as soon as the border opens, I’ll head out there.

I’m thinking about planning a trip through Alberta to get more than just southern Alberta. That takes time and money, so I’m stewing on that in my head right now. And then I would like to do a similar activity in Saskatchewan and Manitoba to get some features that people will recognize when they’re looking at my images.

January 4, 2023
“Is it really necessary to spray in all cases?” It’s a question posed by Brent Puchalski, a molecular plant pathologist.... More
Prev Post GOLDEN OPPORTUNITY
Next Post BUG BIBLE 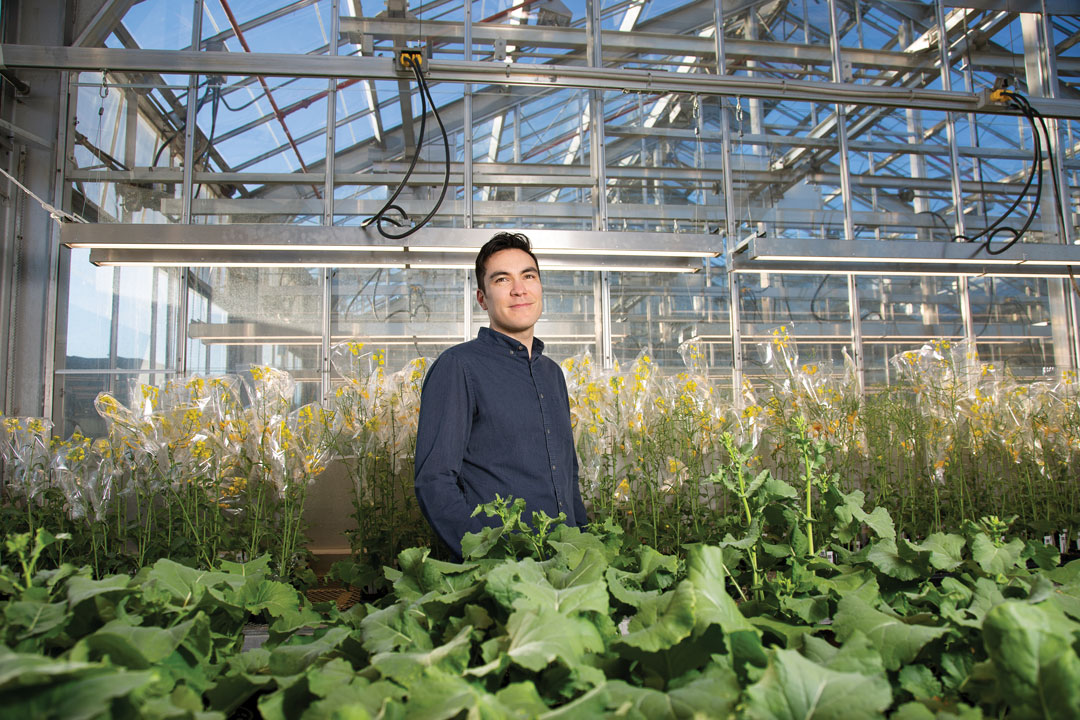 THE SECRET LIFE OF BUGS