Maintaining a zero-tolerance approach has worked famously well to keep Alberta rat-free. Taking a similar approach with invisible spores has proven impossible. To better reflect this reality, the Government of Alberta signed a ministerial order in June to remove Fusarium graminearum from the Pest and Nuisance Control Regulation. The move reflects a shift in focus for the province from zero tolerance to disease management.

With annual Fusarium-related losses in Canada ranging from $50 million to $300 million since the early 1990s, the right approach could mean the difference between black and red ink for Alberta farmers.

Over the past 30 years, Fusarium established itself in many cereal production areas of the province. Its spread across countless fields led to the decision to remove it from the regulation.

“Once Fusarium became endemic in Alberta, a regulatory approach stopped making sense,” said Shannon Sereda, government relations and policy manager with the Alberta Wheat and Barley Commissions. She led the Fusarisum head blight (FHB) working group that pushed for the regulatory change. Comprised of a broad range of industry stakeholders including crop groups, seed processors and global crop science companies, the group has long been an advocate for moving from regulatory control of Fusarium to promotion of best management practices.

“The regulation was put in place to try and mitigate introduction of the disease, but it hasn’t been effective in that regard,” said Sereda. “Our group brought together members of the industry to develop and support a plan for Fusarium mitigation, and part of that advocacy position was removal of the disease from the pest regulation.”

Part of the strategic shift in dealing with Fusarium involves updating the Alberta Fusarium graminearum Management Plan. The plan was released in 2002 by the Alberta government to limit the spread and impact of the disease.

“The plan will be updated to include new disease management tools that have recently become available such as the Alberta Climate Information Service Fusarium weather-based risk assessment tool,” said Michael Harding, Alberta Agriculture and Forestry (AF) research scientist, crop health and surveillance. “Furthermore, the revisions will remove information on legislation, regulation and enforcement that is no longer applicable.”

Harding is also a former chair of the Fusarium Action Committee (FAC). Led by the Alberta Wheat Commission (AWC) and Alberta Barley, the committee is comprised of industry representatives. It offers recommendations on Fusarium-related issues and best management practices to the AF pest surveillance section.

In Harding’s view, the change in approach to Fusarium was a natural evolution. “Where Alberta was once the only jurisdiction to regulate Fusarium, we are now on the same playing field as other provinces,” he said. “Fusarium graminearum in Alberta will no longer be regulated by the province, but the responsibility to manage this pest will be shared by producers, industry and governments.”

While the decision removes regulation, legislation or enforcement under the Agricultural Pests Act, “best practices such as seed testing, cultivars with tolerance or resistance to Fusarium head blight [FHB], high quality, disease-free seed, risk assessments and fungicide applications will remain essential to successful management of FHB,” said Harding. AWC chair Todd Hames said the change in regulation and update to the Fusarium graminearum Management Plan reflects the reality of the modern farm. “Fusarium is widespread in Alberta and it is an airborne and soil disease, so regulations can’t keep it from crossing the border,” he said. “Nobody wants to use the regulation as a big stick enforcement tool and make people feel badly about what is happening on-farm. Given a more realistic approach, we can manage Fusarium with our heads up rather than with our heads in the sand. For me, that is the key aspect to this in that we need to give farmers the freedom to make decisions that make sense for their operations.”

The emphasis on a realistic approach to Fusarium also rings true for many Alberta seed processors. “We have been involved in Fusarium management since it was added to the Agricultural Pests Act in 2002, insofar as plant operators submitting samples for growers to seed labs,” said Monica Klaas, general manager of Alberta Seed Processors (ASP).

“Because of the regulation, seed plants were prohibited from cleaning or handling any seed that had Fusarium infection. Plant operators ensured there was a Fusarium test done on seeds, and if the test was positive, even if the test showed a minute trace infection level, we had to tell farmers they couldn’t use the seed.”

With Fusarium now prevalent across Alberta, many ASP members would likely see a negative impact on their business volume if they kept to the letter of the law. “We are not the only game in town, so if we refuse to clean seed, farmers will find another way to do it; or worse, use uncleaned seed,” said Klaas. “The removal of the disease from the pest act means farmers should still test their seed for Fusarium, but now seed plants can legally process seed with low levels of the disease.”

Peace Country farmers and seed growers are among those less than enthusiastic about the change. “A lot of farmers in this region thought they were an island, as we have a large green zone that isolates us from other farms in Alberta,” said Nick Sekulic, who operates a commercial grain and pedigreed seed business in the Rycroft area. “There was a time when Fusarium wasn’t even on our radar, but we have had a number of wet growing seasons over the last several years that produced prime conditions for Fusarium to thrive.

As a result, growers are realizing that Fusarium is now an issue, and that testing and treating their seed is more important than ever.”

The focus on disease management over zero tolerance is the accepted way forward. With its main tasks accomplished, the Fusarium working group is passing the torch to the FAC, which is now sorting out its role as the industry evolves.

“We recently held a meeting to set the stage for the future of the FAC and we see our role as still relevant from a policy perspective,” said Lauren Comin, AWC and Alberta Barley director of research. “We can inform various extension and education measures around Fusarium management as we have the right experts at the table. Also, as we update the management plan to encourage best management practices, we can add new tools to the plan based on the most recent research results.”

Whatever your perspective, it is a brave new world for Alberta farmers, and one that will aid them in the ongoing battle with Fusarium. “Farmers will have a heightened awareness and greater vigilance around the disease,” said Comin. “The real benefit is the educational aspect in knowing you must be on your toes about Fusarium and manage it appropriately.”

Part of that management involves asking the right questions: Am I growing the right crop? What am I experiencing at flowering? What are the weather conditions in my area and are they conducive to Fusarium? Have I or my neighbours recently seen Fusarium in the field?

AWC will continue to invest in research to combat Fusarium with resistant varieties being the first line of defence. “Historically, we haven’t had great Fusarium resistance as it is a complex disease controlled by a number of genes,” said Comin. “We continue to use the latest genetic and genomic methods to include resistance in our varieties. We are also looking at different learnings in terms of management and rotation, and gaining insights from other provinces that have dealt with the disease and changed their farming practices. For example, we don’t want to lose a crop like durum due to its poor resistance, so what else can we do to manage the disease?”

To further support farmers in their fight against Fusarium, AWC and Alberta Barley recently launched the FHB website managefhb.ca. The site features information on how and why to manage Fusarium. It also outlines the regulation change and what it means for farmers.

Due to the vagaries of weather and consumer demand, Alberta farmers will always contend with a level of stress regarding Fusarium, but they can take comfort that zero tolerance is a thing of the past.

As science continues its quest to combat FHB, a recently completed project examined new breeding methods to develop FHB-resistant barley varieties. “This initiative was built on a foundation of localized experience of FHB in barley,” said Ana Badea, Agriculture and Agri- Food Canada (AAFC) research scientist in barley breeding and genetics. The project has centred around a large FHB nursery at Brandon, MB, that has been in operation since 2000. “A sizeable panel of Canadian barley breeding lines was evaluated in multiple FHB nurseries for their reaction to FHB and the content and level of the associated mycotoxin deoxynivalenol [DON].”

As part of the current project, which involved Tucker, Fernando and Badea, researchers used molecular data to develop predictive models for application in breeding barley with FHB-resistant material and lower subsequent DON content.

“Since it became an economic problem in the 1990s, FHB has been a devastating and difficult disease to combat,” said Badea. “Resistance breeding for FHB is challenging for barley breeders as many small genes in combination are required to contribute to the desired outcome of a resistant barley cultivar.”

Where traditional breeding is limited by labour intensive field evaluation, nursery capacities and tedious DON testing, breeding based on genomic information offers the advantage of selection prior to field evaluation. This allows breeders to use valuable field resources in a more efficient manner.

Though there is still work to be done, scientists see a range of benefits emerging from the project. “We expect that our results will lead to further development of FHB resistance in barley, which may limit DON production and increase sales into lucrative malting barley industries,” said Tucker. “New cultivars that also feature improved built-in FHB resistance will allow Canadian malting barley producers to stay competitive by producing high quality malting barley suitable for both Canadian and global markets.”

A team of Chinese and American agricultural researchers has identified a gene in Thinopyrum wheatgrass that will be used to develop FHB-resistant wheat varieties.

“Wheat FHB is a devastating disease in both the U.S. and China,” said Guihua Bai, research plant molecular geneticist with the United States Department of Agriculture. “Thus, the search for resistance to FHB is an important research objective for wheat geneticists and breeders.”

To date, many genes for resistance have been reported, but most of them have a limited effect. One that has a substantial impact is Fhb7, the focus of this project.

The international nature of this project was critical as researchers required expertise from several areas to achieve their objectives. “We needed people with experience in genotyping, phenotyping, genomics and biochemistry support,” said Bai. “That was the basis of our international collaboration, and a big part of our success.”

November 24, 2020
There is strength in numbers. It’s a truism that has motivated cereals commissions across the Prairies to team up and st... More

November 10, 2020
The first Co-op Disker rolled off the assembly line of the of the Canadian Co-operative Implements Ltd. (CCIL) Winnipeg,... More

November 10, 2020
Early snow and wet or moist conditions in the fall are conducive to pre-harvest sprouting (PHS) in wheat and barley. PHS... More

November 10, 2020
BY ERIN GOWRILUK On Aug. 18, Prime Minister Justin Trudeau announced Parliament would be prorogued until Sept. 23. His r... More

November 10, 2020
A shared value strategy under development in the Canadian grains sector will enable eco-labelling for products made usin... More 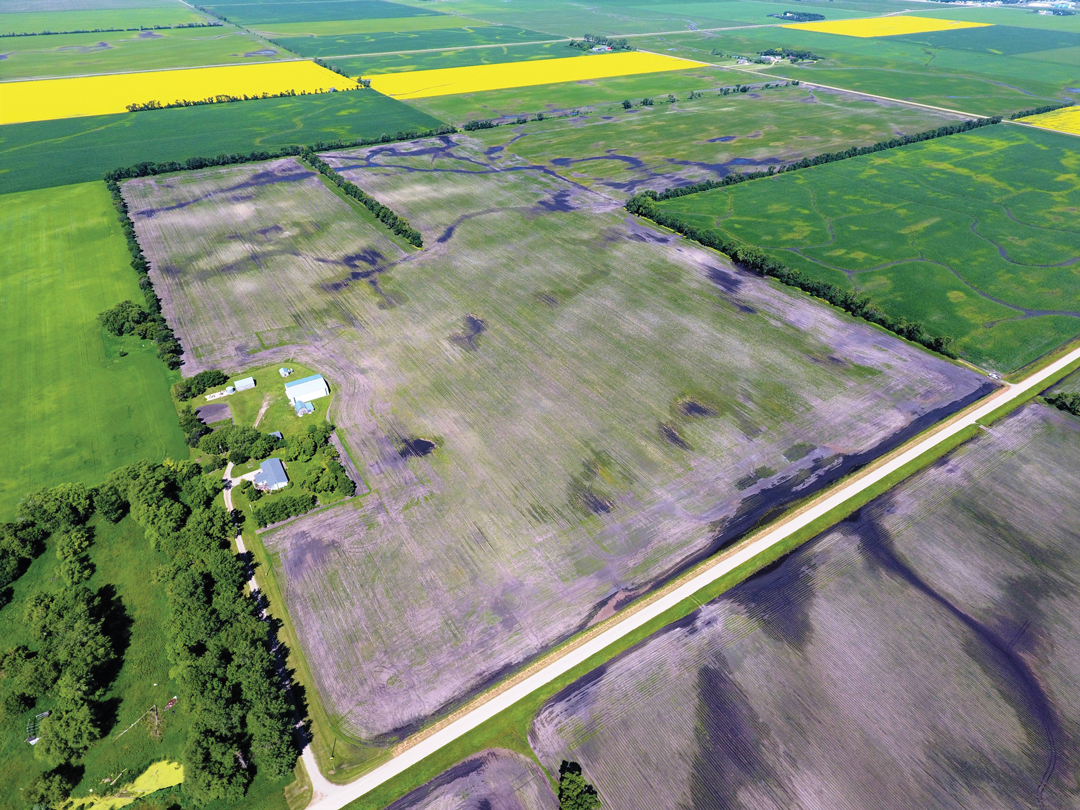 A BUZZ IN THE AIR

How to grow crops and influence people. We discuss ag awareness with @lesleyraekelly #https://grainswest.com/2020/11/how-to-grow-crops-and-influence-people/ @DoMoreAg #westcdnag