“Put more farmers in front of more policy makers more often,” said Erin Gowriluk. The executive director of Grain Growers of Canada, she spoke at the Prairie Cereals Summit (PCS) 2019 directors and delegates kickoff session. The annual conference centres around the Alberta Barley AGM while presenting speakers and panel discussions of interest to farmers and ag industry professionals working within the wheat and barley value chains. Held at the Banff Springs Hotel, the conference’s backdrop of snowcapped Canadian Rockies is an undeniable draw.

PCS 2019 focused on sustainability and agriculture telling its own story. Gowriluk’s comments about the effective communication of farming issues within the sector and beyond were echoed throughout the two-day conference. She and fellow ag industry leaders discussed the progress of policy issues impacting Canadian agriculture. As part of this session, barley value chain roundtable participants emphasized solid communication along the value chain is key to the sector’s health. 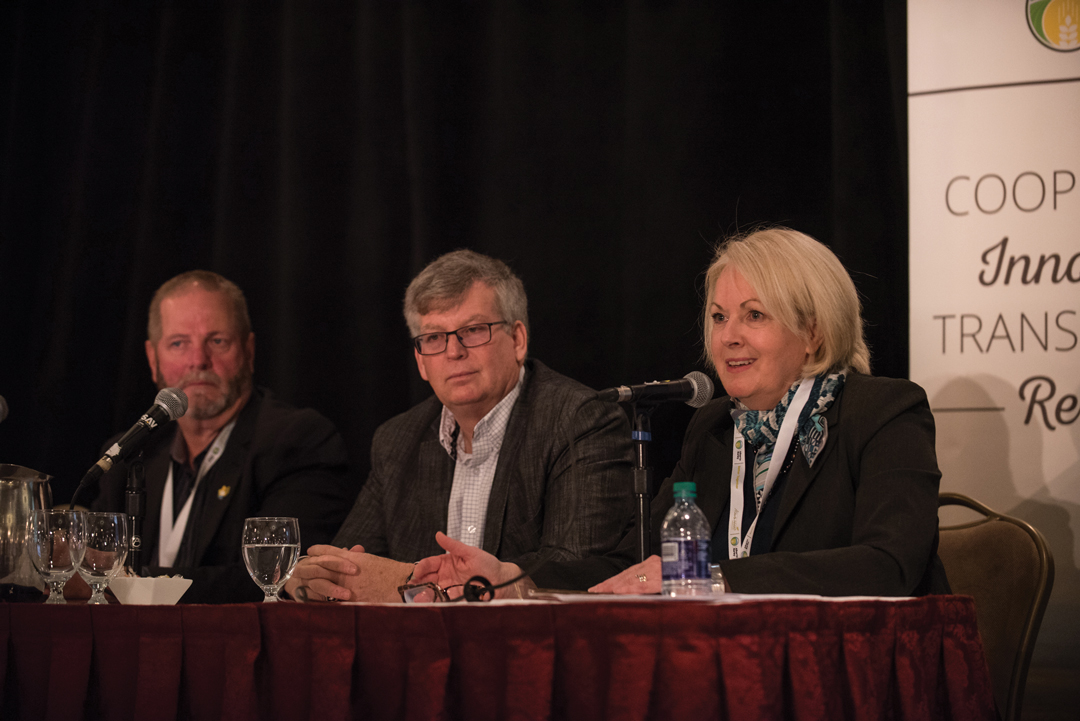 The grain transportation panel discussed the relationship between the ag and railway industries. From left to right: Jeff Nielsen, Dave Bishop and Fiona Murray.

As the informative day in the hotel’s Alhambra room moved along, Alberta Barley chair Dave Bishop kicked off the group’s AGM, telling guests the crop group can’t control the weather, but it can affect government policy. Bishop said he’s confident Alberta Barley’s voice was heard when it called for a swift end to November’s CN rail strike. 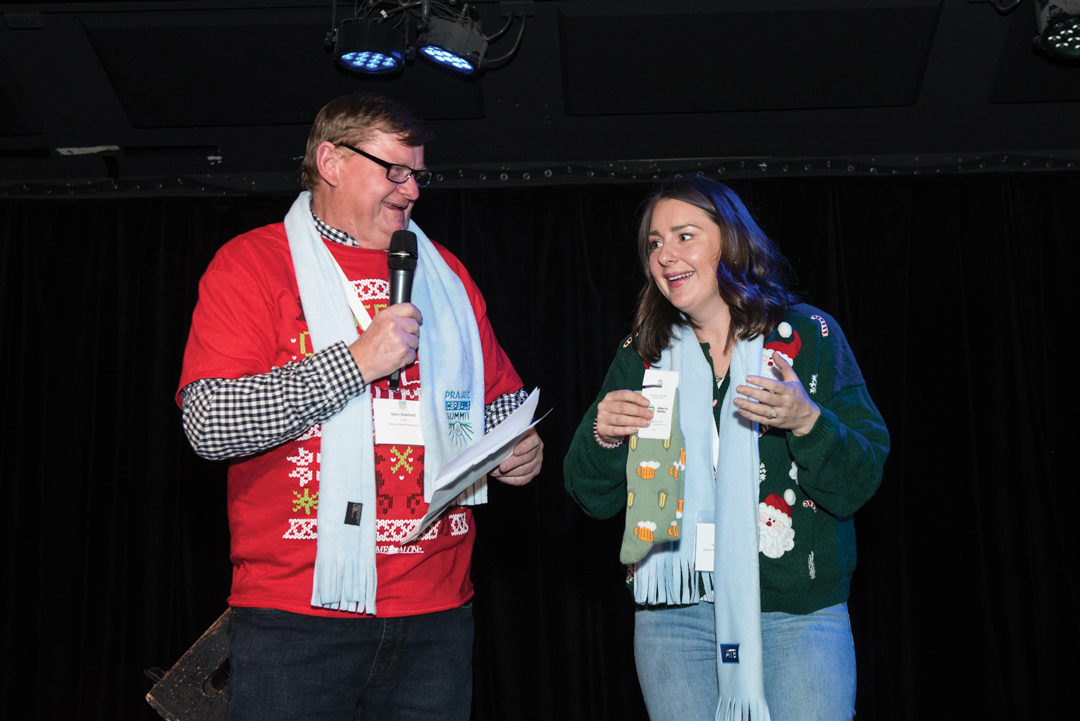 The following morning, the day’s first speaker was Ted Menzies of CropLife Canada who discussed the need for a farmer-created industry code of practice. As trade competitors such as Australia threaten to “eat our lunch” with respect to sustainability programming, he suggested that should the industry fail to act, such a code may be imposed by the federal government.

Another warning about the failure to act came from AdvancingAg Future Leaders Program mentee Jordyn Prior. Farmers need to tell their stories to counter tales being told about the industry by anti-ag voices, she said. To do so, she urged the crowd to engage with the world in new ways. “Our competition is on Instagram. We’ve got to get over there and tell our stories.”

With the CN strike recently ended, the grain transportation panel addressed relations between farmers and the railways. Fiona Murray, CN VP of public and government affairs, joined Jeff Nielsen and Dave Bishop in discussing the need for better communication. Murray said it’s time for a fresh start in the relationship and emphasized both parties have much in common, acknowledging the frustration in the room.

A technology panel on sensor innovation and another on the use of blockchain in the agriculture and agri-food realms completed the morning.

Following lunch, former Alberta MLA and federal MP Stockwell Day took the stage to discuss international trade, particularly with China. “China likes us, I’m not sure China needs us,” he said. He added, though China is drawn to the pristine quality of Canadian farm products, foot dragging by the federal government has diminishing ag trade prospects with that country. Addressing China’s shutout of Canadian farm imports that followed the arrest of Huawei’s Meng Wanzhou, he said he hoped the political element of the action would see her freed.

Day also said farmers are losing the battle against anti-ag messaging. “We need to find ways to say smart things the right way, quickly. We have to be pushing back. Ag is losing this battle.”

Illustrating the importance of such agricultural messaging in grain marketing, the sustainability and consumer choice panel featured two food company representatives and one farmer. Adam Dyck of Wharburton’s, Greg Viers of Barilla and Jason Lenz, region 3 director for AWC and Alberta Barley, discussed how customer demand, including concern about chemical residues, affects the sourcing practices of food processors. 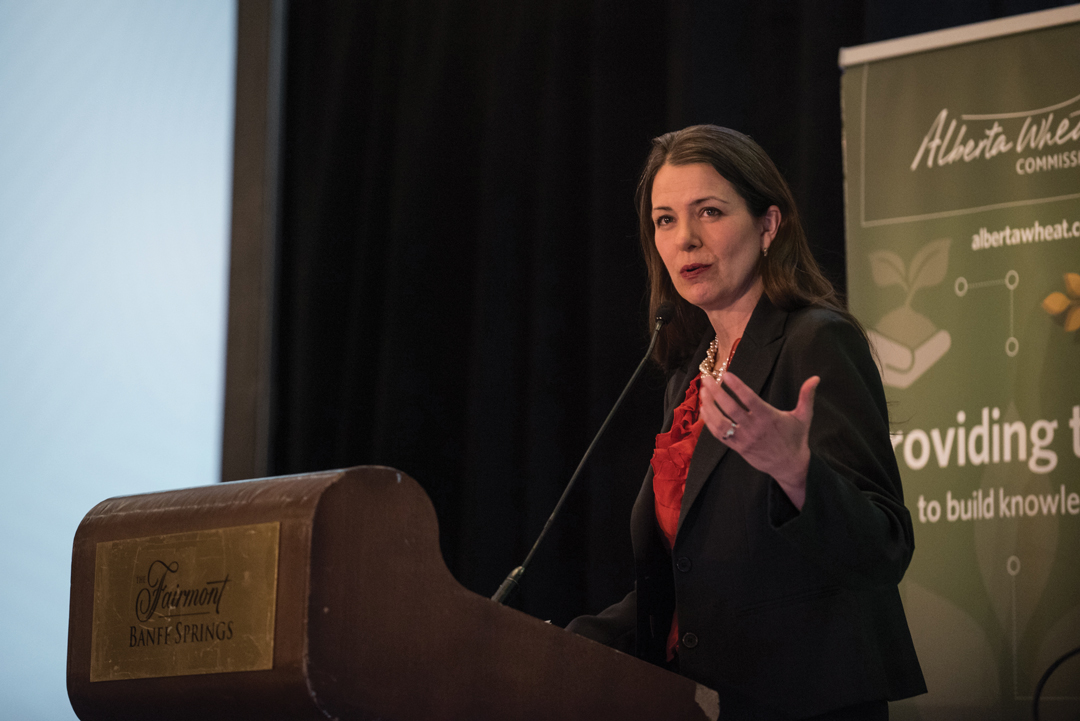 In a wide-ranging talk, Smith suggested agriculture can piggyback on the Alberta government’s Canadian Energy Centre communication initiative, mirroring its example of fighting against critics. She also lightly chided farmers for not speaking up about the economic effect of the federal carbon tax on their operations.

Devin Dreeshen, Alberta agriculture and forestry minister, delivered a short pre-dinner address. He said farming is an economic bright spot in the province and thanked the audience for supporting agriculture. With a chuckle, he also requested they not forget about forestry. 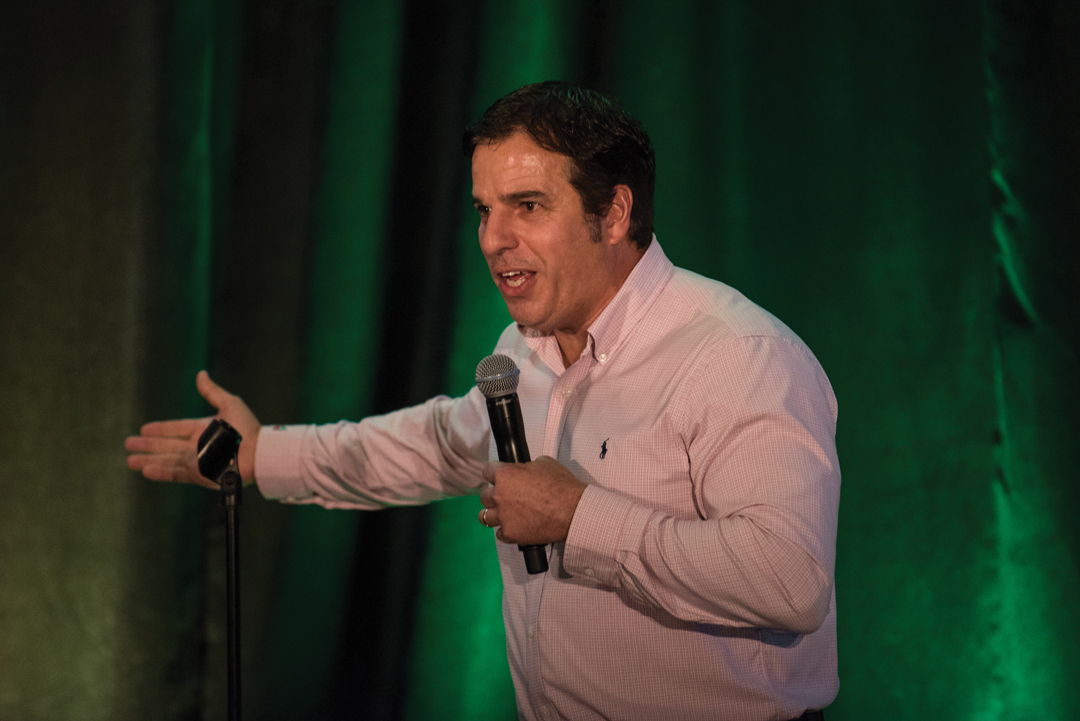 Generating plenty of laughter, farmer and comedian Joe Pillitteri entertained the dinner crowd with jokes and stories about farm life.

The evening concluded with a standup routine by farmer and comic Joe Pillitteri. Though the Ontario vineyard operator’s jokes and stories were decidedly non-political, he did speculate that Stockwell Day, who is very physically fit, could bench press his dad.

Cracking wise about the tiny print on the posters presented in the pre-dinner scientific poster session, he went on to tackle farm mental health, a timely topic given Alberta’s difficult fall harvest. In a surprisingly funny story about his own experience with farm-stress, anxiety and depression, he said communication with family and his community won the day.

It was a high note that wrapped two days of informative discussion, networking and socializing. With this combination of must-attend sessions and in-demand speakers, PCS has become a hot ticket on the fall ag conference circuit.

For more information about upcoming events, visit the AWC and Alberta Barley websites and click on “events.”