LOCKED UP AND READY FOR BUSINESS

To remain open for business during the COVID-19 pandemic, seed processing facilities have locked their doors. While they may be shut tight, they remain very much open for business and are adjusting to pandemic protocols in the busy, sometimes stressful run up to spring seeding. Customers can no longer enter buildings, and dealing with staff is now done by phone, through glass or at the recommended six feet of physical distance. According to facility managers, these precautions may have initially seemed excessive, but are practical, necessary and mandated by Alberta Health Services (AHS).

On March 30, GrainsWest spoke with Monica Klaas, Alberta Seed Processors general manager. Typically, this is the time of year many plants operate 24 hours a day and seeding in some parts of Alberta is just 30 days away. When the public was instructed to self-isolate by AHS, said Klaas, Alberta Seed Processors began advising its 67 member co-operatives on the preparation of contingency plans.

“I’m confident that our people are able to look at their situations and establish best management practices and are being business role models in these trying times.”
—Monica Klaas.

Two or three plants located in forest fire prone regions had previously created such plans, and those with on-site chemical storage have appropriate emergency plans in place. Preparing to remain operational while potentially having a portion of their workforce in quarantine, however, was something entirely new for all of them. “I’m confident that our people are able to look at their situations and establish best management practices and are being business role models in these trying times,” said Klaas.

Like everyone else, she said, many rural Albertans initially thought COVID would blow over before it arrived on this side of the globe. Following along with international news reports, they realized the necessity of preparing for the coming wave of infection. Klaas said the situation is an inconvenience that will require people to change their behaviour but the farm sector can operate within pandemic-time boundaries. “For the most part, people are working together and finding solutions,” she said.

Central to these solutions is keeping human contact to a minimum, and this has led many facilities to lock their doors to customer traffic while instructing them to largely remain in their vehicles while they are weighed, unloaded or loaded.

Seed plant staff members are maintaining social distance, minimizing work gatherings and staggering break times. They are also stepping up the cleaning of high-contact surfaces such as doorknobs, computer keyboards and touchpad instrumentation. As many employees wear leather gloves, these are being regularly changed and sanitized.

In the event employees are unable to work, each facility is cross-training as many employees as possible so they are familiar with each other’s duties, said Klaas.

“We cannot shut down at this time of the year. We’ve got so much seed to get processed in the next two months, that would be a disaster for the area’s farmers.”—Bruce Mathieu

In southern Alberta, the Enchant Seed Cleaning Plant’s three full time employees clean, treat and process seed for export. Its pandemic response practices kicked in on Saint Patrick’s Day. “We figured it was the right thing to do,” said manager Bruce Mathieu. “We cannot shut down at this time of the year. We’ve got so much seed to get processed in the next two months, that would be a disaster for the area’s farmers.”

Customers are understanding, he said, given that elevators are operating similarly and some ag businesses have had to cut back on staff. He believes the Enchant plant is ready to maintain operation if the pandemic drags on. “We have to. We have no choice,” he said.

General manager of the Alliance Seed Cleaning Plant in eastern Alberta, Peggy Erion described her workplace as a locked-door facility as of March 18. The facility cleans and treats seed as well carrying livestock and pet food and many other supplies such as veterinary equipment. It employs five full time staff and one part-timer, which is two more than in spring 2019.

With the pandemic situation evolving quickly and spring seeding just weeks away, Erion knew it was time to take action. “If one of us got sick and we had to shut our plant, we are jeopardizing not just our livelihood, but we’re jeopardizing the livelihood of 200 customers that we service.” She emphasized the pandemic measures the plants are taking are not excessive, and if the Alliance seed plant was to close, other facilities are too busy to absorb its workload.

“The first week was a challenge, but it’s been working very well,” she said. “Most people have become very receptive to it. The biggest hiccup we’re finding is the phones are very busy.” Calls from incoming grain trucks keep the two-person operation hopping, and business is up compared to this time last year. “That’s alright,” said Erion. “That’s what we’re here for, and we want to make sure the guys up top are safe.” Having extra staff members has proven to be a great help.

Though she said it’s OK if customers want to talk to staff, they must do so at a six-foot distance. Typically, truck drivers do stay in the cab as they’re unloading seed, which makes good communication necessary. Erion recently received a call from a farmer as his seed was being unloaded. He hadn’t gotten out of his truck, so he wondered if her guys knew whose grain they were unloading. As they’re familiar with most of their customers, it turns out they did, and everyone had a laugh. The farmer later called back to ask how many bushels he’d dropped off.

Erion said customers are eager to schedule pickups for seed and supplies, especially on the cattle side. She said the plant’s suppliers have gone into overdrive and have made substantial deliveries, ensuring that products are available to farmers. “There’s no fear of a shortage,” she said. She also cautions her customers to stay safe despite the pressures and distractions of pre-seeding preparation. “That is why our doors are locked. It’s important to be safe now. Slow down, don’t panic and we will be here for you.”

The plant’s safety protocols include handling most payments by phone, while customers have the option of depositing cheques in an outside drop box. Inside the facility, day and night crews sterilize all appropriate surfaces at the beginning and end of their shifts. Staff members have been asked to maintain social distancing in their off hours and were given the option of being laid off if they didn’t feel comfortable continuing to work through the pandemic. All stayed.

“I do believe we can weather this,” said Erion. “When I locked our doors, I believed they would be locked until at least May 1. It could even take us into the summer.”

“People understand the seriousness of it. A lot of my customers are in the high-risk demographic.”—Wade Perrin

Wade Perrin manages the Wembley Co-op Seed Cleaning Association plant in Peace Country. Cleaning cereal grains and peas as well as loading producer rail cars, the plant is operating with its usual three staff members. On March 14, they posted signs warning international travellers and people with COVID symptoms to stay out of the office, locking it and launching full pandemic protocols on March 20. “Every day the news changes,” said Perrin. “The rules change. AHS is my new boss, and we all have to follow their recommendations.”

Like Mathieu and Erion, Perrin is prepared to operate this way for the long haul, but knows that if staff members are forced into isolation, the plant may face closure. To avoid this, no more than one person is allowed in the plant’s small office. Perrin loads product in and out on the day shift and an operator cleans grain from 5:30 to midnight. The office administrator then handles paperwork starting at 3 am. Everyone sanitizes everything they may touch as they arrive and again when their shift ends, and payments are being made by e-transfer rather than cheque. Perrin is now texting scale tickets and seed tags and has also installed a hand sanitizing station and non-touch paper towel dispenser.

“I’m getting a very good response,” he said. “People understand the seriousness of it. A lot of my customers are in the high-risk demographic. They’re older farmers who may be travellers and snowbirds. It’s a very serious, easily spread communicable disease, and we just have to do what we can to keep running in this environment and keep everybody safe.”

Heeding warnings from his wife who works in industrial supply, Perrin began to prepare early. He procured everything he thought he may need to keep the operation running for the season. This includes such things as belts and bearings. He worked feverishly to get everything in place in the event parts and supplies become hard to acquire. As of March 31, he was finding it harder to conduct business with bank offices shutting down and supply stores curtailing their hours.

Having cleared their older bookings by the end of February, a lot of new bookings are coming in and plant staff are doing their best to keep up. Perrin usually plans operations two weeks out, which he said is now impossible. “I don’t know what’s going to happen tomorrow,” he said.

Klaas and the three seed plant managers emphasized the importance of keeping processing plants in operation for the sake of farmers. “It’s going to be very trying for our farmers,” said Perrin. “There are a lot of unharvested acres this year up here. And it’s already really late. I just hope that people can get their work done and they can continue on for another year. I’m going to do my very best to make sure I’m there for them.” 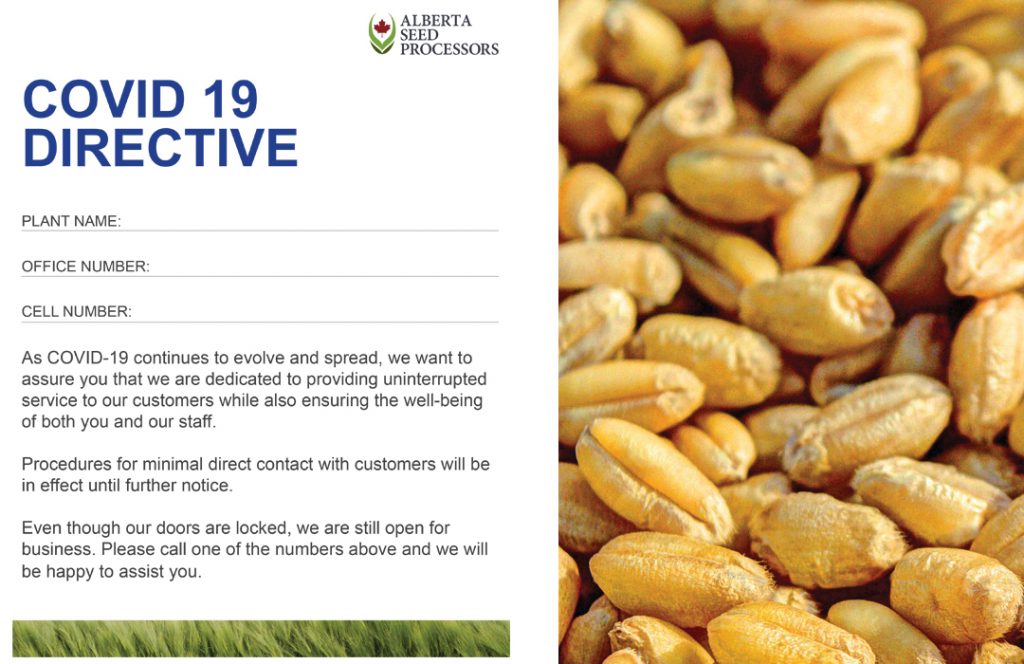 The above COVID-19 messaging has been posted at Alberta Seed Processor member facilities.

January 4, 2023
In an enclosed handling facility at Nature Energy Månsson, a biogas plant in Brande, Denmark, a massive claw hoisted a m... More
Prev Post COVID TRANSMISSIONS
Next Post YOU'VE GOT TO MOVE IT