The Canadian International Grains Institute (Cigi) is experiencing a time of change, but the CEO of the organization sees nothing but opportunity and growth ahead.

Changes to the not-for-profit grain advocate’s funding formula and board structure came into effect at the beginning of August. Previously funded by farmer check-offs through the Western Canadian Deduction, the new Cigi funding formula sees funds supplied by the Alberta, Saskatchewan and Manitoba wheat commissions and seven grain companies for a total of $7.7 million over the next two years.

Cigi CEO JoAnne Buth believes it’s a time of planning for the organization. “It really is an opportunity to look at what the future holds and what do we need to do.”

She explained that the first step is to create a strategic plan, which Cigi board and staff are set to do in the coming months. The board’s membership now includes grain companies. As they’re on the front line of wheat sales, Buth pointed out that they are closely in touch with customers and are in tune with the wants and concerns of those using Canadian wheat around the globe. “They’re aware of their customers and what their customers’ needs are,” Buth said.

New to the Cigi board table with the wheat commissions are: Viterra; Richardson International Limited; Cargill Canada; Parrish and Heimbecker, Limited; Paterson Grain; G3 Canada Limited; and the Inland Terminal Association of Canada.

The organization’s mission is to increase the use of Canadian grain and field crops around the world. More than 45,000 people from 115 countries have participated in Cigi programs and seminars on technical topics, innovative processing solutions and skills training. Participants represent many facets of the grain industry and include farmers, grain buyers, millers, scientists and breeders.

“We have run programs at Cigi that have been very successful,” said Buth. “We have focused programs and priority areas, and we can now work with the companies to see what their needs are,” she said. “Working more closely with [grain] companies, we can see where those opportunities are … It might provide a bit more focus on where we can provide more impact.”

Alberta Wheat Commission general manager Tom Steve agrees with Buth and believes Cigi’s future will be built on its reputation and accomplishments. “I think there’s been a long-standing recognition of the value Cigi provides in terms of Canada’s reputation as a quality supplier of wheat to the world,” he said. 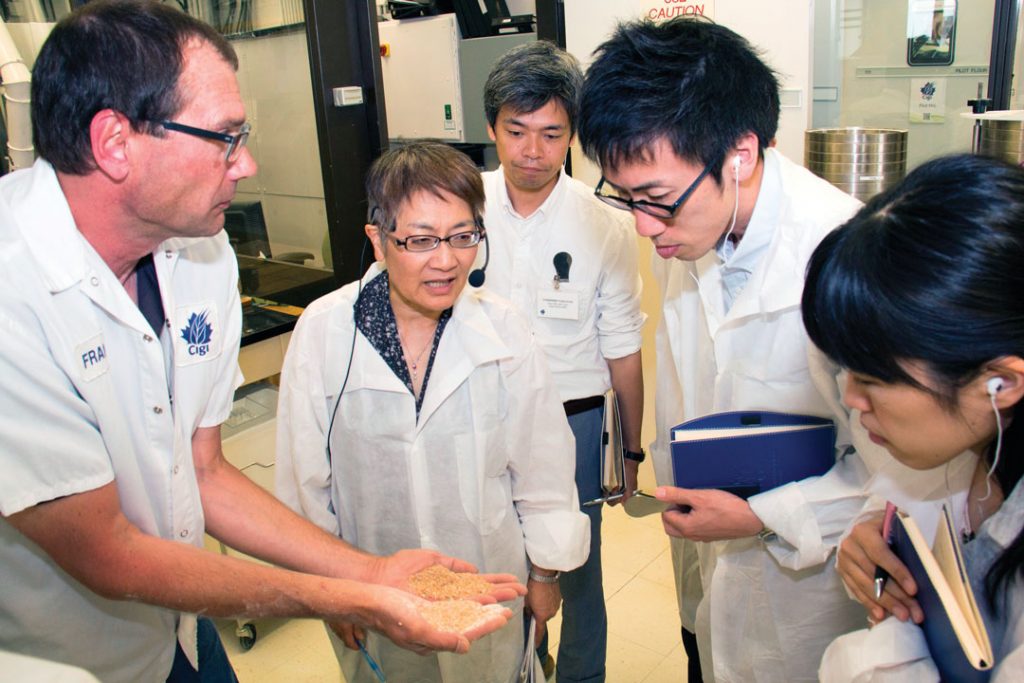 Cigi is also viewed as an important resource for clients working with the value chain to both develop the products their customers demand and provide technical support for end users. Cigi market support activities for 2017/18 include plans for technical training programs in countries such as Singapore, Peru, Mexico, Japan, Indonesia, Algeria and Morocco. As well, new crop missions are also planned for multiple European, Asian and Latin American countries.

Steve acknowledges farmers can sometimes think of the grain elevator as the customer and may forget to take a broader look at where their wheat goes next. This is the stage at which Cigi thrives, promoting the sale of Canada’s grain abroad.

“The wheat market is the international customer. Cigi is a really important resource that’s changing, and we’re confident it’s going to add to our value proposition to our customers,” Steve said.

He views the new Cigi board structure as a tremendous advantage in the building of a collaborative marketplace. “Cigi is a critical element to that market support and market expansion. They work with our clients and provide extremely valuable service,” he said.

At the same time, he sees the new Cigi funding and governance models providing more accountability to his members and the balance of Canadian wheat farmers. “Governance is now directly accountable to the largest funder (the farmers). It’s an enhancement in terms of a more accountable, market-responsive funding model,” Steve said.

Under the previous funding model, Alberta wheat farmers paid two check-offs on their cash tickets—one to the commission at 70 cents a tonne and a further 48 cents a tonne to the Western Canadian Deduction.

The $1.09 single, consolidated check-off is a nine-cent-per-tonne reduction from what farmers paid prior to July 31, 2017. The wheat commissions assumed the funding obligations of the Western Canadian Deduction, including core funding for the development of new wheat varieties. Grain companies have committed to making up the budget shortfall for the next two years.

Buth said the switch to the new funding model and governance structure was the culmination of months of consultations involving the value chain, and called the change an important milestone in Cigi’s 45-year history.

Prior to the latest change in funding sources, Cigi was funded by the Canadian Wheat Board (CWB). After Aug. 1, 2012, when the CWB lost its monopoly, the federal government gave Alberta Barley the ability to act as the middleman in managing the Western Canadian Deduction for three recipient groups—the Canadian Malting Barley Technical Centre, Cigi and the Western Grains Research Foundation. This five-year Alberta Barley management period from Aug. 1, 2012, to July 31, 2017, was intended as a temporary administrative solution while Alberta, Saskatchewan and Manitoba developed their own provincial grain commissions, which would collect levies of their own on wheat and barley sales.

Once these provincial groups were up and running, it was stated that as of Aug. 1, 2017, the newly formed provincial grain commissions would have to determine how to fund the three recipient groups.

Cigi’s new board chair, Kevin Bender, said the board of directors is eager to begin its work. “As new board members and funders, we are excited about our role in supporting and shaping Cigi’s future. It’s an organization with a long and distinguished history of working on behalf of farmers and industry to promote and demonstrate the quality and functionality of Canadian grain in international markets.”

Bender also acknowledged the outgoing board members and outgoing chair Murdoch MacKay for their efforts on behalf of Cigi. “Through their foresight and determination, they succeeded in guiding Cigi through a period of significant industry change and have provided the new board with a solid foundation to build upon.”