Quagga and zebra mussels are two invasive species that attach themselves to hard objects in the water like irrigation pipelines. Although individual mussels are only two to four centimetres long, they reproduce rapidly and can cut off the flow of water through a pipeline within a matter of months, as one layer of mussels builds on the next.

In November of last year, water in Montana’s Tiber Reservoir tested positive for quagga mussel larvae. The presence of these microscopic larvae (known as veligers) only 80 kilometres from the Alberta border put the province on high alert.

“Previously, the closest [detections] were in Utah, so now they’re only a couple of hours away,” said Ron McMullin, executive director of the Alberta Irrigation Projects Association (AIPA). “We’re not putting our heads in the sand and saying we’re never going to get them.”

AIPA represents Alberta’s 13 irrigation districts, which together have about 4,000 kilometres of pipelines irrigating almost 1.4 million acres of land that contributes $3.6 billion to Alberta’s gross domestic product, according to a 2015 study done for the provincial government. The irrigation districts and the producers they represent have much at stake if the mussels make it to Alberta waters. It could cost millions of dollars to clear the mussels out of public irrigation pipelines and privately owned pivots.

In total, the province estimates a mussel invasion could cost up to $75 million per year, as irrigators, as well as power generating stations, property and boat owners, fishing enthusiasts, and municipal drinking water systems, could all be negatively affected.

In order to prevent the spread of mussels, the government passed legislation in the spring of 2015 mandating that all boats entering the province stop at inspection stations. Inspectors examine boats for the telltale roughness of mussels adhered to surfaces and make sure that boaters are aware of the province’s “clean, drain and dry” policy for boats, meaning that boats and gear are cleaned; bilges, buckets and ballasts are drained before leaving the vicinity of a water body; and any standing water is dried.

In 2015, a few capable canines joined human inspectors in their efforts to find any stowaway mussels before they enter the province. Three dogs work full time sniffing boats, many of which provide hiding places for mussels.

“We were able to show that the dogs were very accurate and very efficient when inspecting the boats,” said Cindy Sawchuk, invasive species conservation lead with Alberta Environment and Parks (AEP). “Mussels like to hide in dark, damp places, so the dogs help with that a lot.” 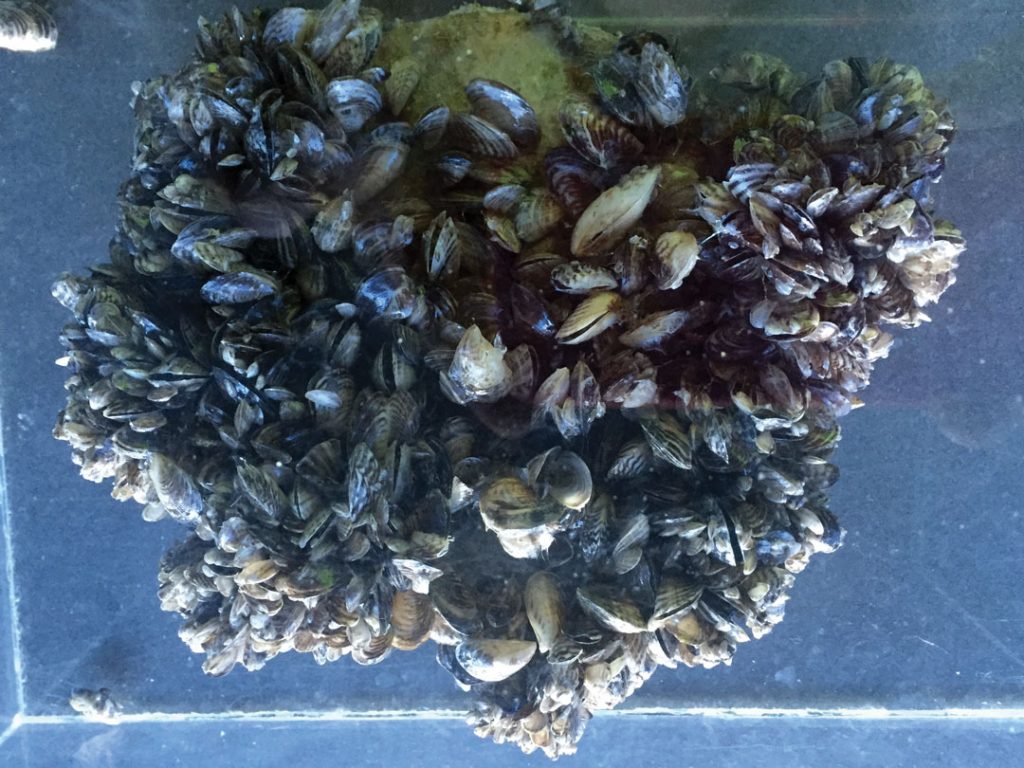 Recognizing the risk that invasive mussels pose to its members, AIPA has contributed $215,000 to fund the training of more canine inspectors and their handlers, as well as “clean, drain, dry” signage at lakes and reservoirs.

In 2016, AEP inspected 19,000 boats, a massive increase from the 395 boats that were examined during the inspection program’s first year in 2013. Seventeen mussel-fouled boats were intercepted—14 originated from Alberta’s neighbouring provinces to the east and three came from the United States. The inspection stations were open from March to October of 2016 and will reopen again this month, as a number of boats belonging to Canadian “snowbirds” return to the country.

In addition to inspections, AEP also monitors Alberta’s waterways for mussels and their larvae. In 2016, 70 water bodies were inspected for both adult mussels and larvae.

So far, all water bodies have tested negative, but mussels might not be kept at bay forever. An emergency response plan is in place in the event of an initial detection, and Alberta Agriculture and Forestry is currently researching the possibility of using potash dissolved in water to control mussels in the irrigation system.

The potassium in potash is toxic to mussels, but doesn’t harm other fish and water insects. Some smaller water bodies in the U.S. have been treated successfully with potash, but the current focus is on using potash to control the mussels within the irrigation infrastructure.

“Once the potash-treated water has been placed in the pipelines, we’re currently thinking it will be held in the pipeline for a few days and then that water will have to be irrigated out onto the crop,” said Barry Olson, soil and water research scientist with Alberta Agriculture and Forestry’s water quality branch.

Although not yet registered for control of mussels in Alberta, potash seems like a promising product to control mussels in irrigation systems. Along with being safe for other aquatic species, it is non-corrosive and already present in Alberta’s clay soils, according to Olson. His department is also researching the effects of multiple potash applications on crop quality and soil chemistry.

“A likely scenario is that it will be going into maintenance,” said Olson. “We won’t eradicate the mussels but hopefully we’ll keep them clear.”

Groups like the Milk River Watershed Council Canada (MRWCC) are geographically on the frontlines of the mussel threat and work across borders to prevent the species’ spread. The Milk River begins in Montana before travelling into southern Alberta, then back into Montana and eventually into the Missouri River system. With much of its flow being directed from another river system—the St. Mary—the Milk River could potentially be at the epicentre of the cascading effects of a mussel invasion, explained MRWCC executive director Tim Romanow. The council encourages private irrigators on the Milk River to inspect their pumps for mussels when they put them away in the fall.

Romanow is pleased with the work the government has done to bolster enforcement and inspections in the province, but he knows the risk is still high in some areas.

“There is a quite a bit of local traffic that will go back and forth from the Tiber Reservoir into Duck Lake and into the Waterton Lakes, which are the headwaters for Milk River and St. Mary’s,” said Romanow. “Those boats wouldn’t be crossing where there’s an inspection station.”

January 4, 2023
The Russian invasion of Ukraine began on Feb. 24, 2022, resulting in thousands killed or injured, millions displaced and... More
Prev Post DATA MINER
Next Post ABOVE THE GRADE

RECOMMENDED READING ON FOOD AND FARMING