For western Canadian grain producers, the 2016/17 growing season saw environmental conditions that were nearly perfect—perfect for a dramatic increase in Fusarium graminearum in their wheat crops, that is. As a result, the year revealed several potential drawbacks to Canada’s current wheat grading system.

Sarah Foster, president of 20/20 Seed Labs in Nisku, said that beginning in September of last year, her lab began receiving calls from farmers to complain about what they perceived as unfair downgrading and discounting of their grain due to the current testing processes.

“We heard reports that inspectors were seeing spores on the crease of the seed and symptoms of Fusarium on the seed,” she said. “But when the grain was actually tested for deoxynivalenol (DON), the next step of the quality assessment, the DON had nowhere near the amount of infection the grader was suggesting there was.”

While minimally toxic to animals in small amounts, at higher levels DON can result in reduced feed consumption or feed refusal. When farmers bring their grain in to sell at the elevator, DON levels are estimated through a physical inspection for Fusarium, where kernels that appear damaged are counted. In addition, Falling Number (FN) testing is conducted, also assessing the grain visually for sprout damage that can affect its bread-making quality. Many farmers who have had samples downgraded for sprouting have received independent FN results that indicate good milling quality.

Foster said there have been complaints about these visual—and therefore subjective—tests for a number of years, and more accurate testing methods are needed on site at the elevators to clear up More objective grain testing and grading required to keep these kinds of issues and ensure farmers are paid fairly for the quality of grain they produce.

“These are general quality standards where the physical appearance of the grain is spoiled, but it may not have an effect on the final product,” she said. “The Alberta Wheat Commission (AWC) recently said ‘enough,’ and they are requesting a more scientific way to establish the grade.” 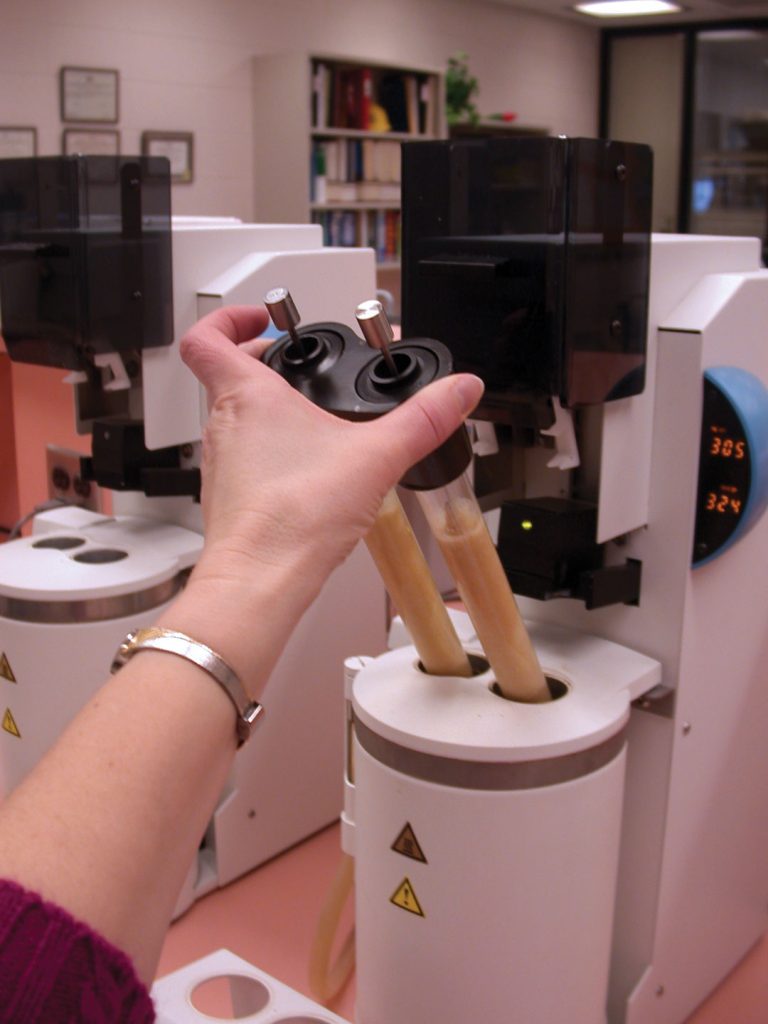 A grain farmer himself, he understands well the importance of meeting buyer demands, particularly at the export level. He estimates that approximately 80 per cent of the wheat grown on his 5,000- acre farm near Carmangay ends up in the export market. Auch said this number was typical of most Prairie operations, depending on the year.

“If grain buyers around the world are buying the product based on certain criteria, and farmers are not paid accordingly, it makes us farmers less competitive in the long run,” he said.

In November of last year, AWC called on the Canadian Grain Commission (CGC) to implement improved methods of testing

that would ensure farmers maintain their international competitiveness and receive fair market price for their grain.

Auch echoed Foster’s suggestion that the ideal alternative would be to have a scientifically accurate testing method available when wheat is delivered to the elevator that would indicate the actual DON levels in a sample, and therefore the fair price for the grain.

“We realize the potential for technological constraints in regard to this issue, but if we don’t take the steps to work toward something, it will never be accomplished,” he said.

Auch added that the current grading system has been serviceable, but AWC feels there is always room for improvement when it comes to keeping Canada competitive. “Any time we can get an analytical, objective measurement to replace a visual, subjective type of grading, it’s good for everyone, including farmers,” he said.

Auch added that AWC was encouraged last year when the CGC made changes to the acceptable downgrading levels for mildew in wheat samples. “We want the final users of our wheat to have a quality product and to get the best possible outcomes from using Canadian wheat,” he said. “If there isn’t a good reason to downgrade based on mildew, if it has no effect on the final product, we don’t believe in downgrading our price back to the farmer either.

“We’re happy the CGC recognizes this and that they made the changes necessary. We applaud them for considering these types of things so that we are not discounted for them when they don’t affect the final product.”

Still, Auch said AWC aims to ensure that when these types of changes are made, they go far enough.

Foster agreed, adding that she believes downgrading standards could be relaxed even further. “In regard to acceptable mildew levels, we’re just trying to align with the standards that are implemented in the United States,” she said. “I think they’ve always been considered the leaders and so we’ve followed suit to drop from eight to six per cent acceptable levels in regard to mildew. This change is more about standardization than anything else.”

Rémi Gosselin, manager of corporate information services at the CGC, said the CGC is currently working to establish a team within the organization’s industry services and grain research laboratory divisions to advance the initiative.

“This team will be heavily engaged and will work collaboratively with industry producer groups on the path forward,” he said. “This initiative involves a significant change in our current grading system and contains many facets and details. It will take significant time to implement. The benefits and costs to all sectors need to be considered.”

He added that any changes to the grading system need to be supported by solid science and by both standards committees, as well as all industry stakeholders. “We certainly do want to move in this direction, but it will take time.”

Auch agreed with Gosselin’s insistence that any changes be backed by science, adding that the reputation of Canadian wheat is paramount. “We sell a great product. Our wheat is second to none in the world and we want to make sure it remains competitive,” he said. “At the same time, if we are discounting our farmers without good reason, we want to make sure that stops as well.”

January 4, 2023
The Russian invasion of Ukraine began on Feb. 24, 2022, resulting in thousands killed or injured, millions displaced and... More
Prev Post SELFISH SHELLFISH
Next Post AGAINST THE GRAIN