HEALTHY SOIL IS A TOP PRIORITY FOR FARMERS EVERYWHERE

You might just think of it as dirt, or you might not think about it at all. But in the agricultural industry, soil takes on a very different meaning—as one of the building blocks for all the life on Earth.

“In terms of a living entity, there is more life in soil than you would see anywhere on the planet,” said Len Kryzanowski, director of environmental strategy and research with Alberta Agriculture and Forestry. “For a farmer and for society in general, soil is definitely the foundation for our food system.”

Soil is a reservoir for nutrients and water. The material contains millions of living organisms. The micro-organisms in the soil include fungi, bacteria, insects and earthworms that all play vital parts in the health of the soil and in soil processes. For the soil to function at its best, these organisms need to be fed and balanced. Without the soil organisms, ordinary processes like the decomposition of organic matter would not occur.

Alberta has a large variety of soil conditions and types across the province because of its varied climate and the parent material from which its soils developed. The province’s soils are fairly young, about 10,000 years old, and are influenced by precipitation, climate and temperature, as well as the plants that initially grew on the soil. A climate gradient exists from the south to the north of Alberta, displayed by grassland soils in the south, transitioning to wooded or forest soils in the north.

“As the plants grew, they died and replenished the soil with their organic matter, so you had different types of organic matter going into the soil, which will affect the microbial and biological processes going on there,” said Kryzanowski.

Soils across the province range in colour and type from brown, to dark brown, to black, to even grey soils, which are more heavily leached of nutrients.

Like people, soils need balanced nutrition to be able to grow crops. In a closed-loop system, the plants die and return their nutrients to the soil, enabling the soil to grow more plants.

“In farming, because we’re actually removing parts of the crops, whether it’s vegetables from gardening or the seeds from grain we grow in the field, we’re removing the nutrients that make those components,” said Daryl Tuck, a farmer from Vegreville.

And that’s why farmers often need to add fertilizer back into the soil to supply the nutrients that plants need. Fertilizers all come from the earth. There are traditional sources of fertilizer like manure. Nitrogen fertilizer can either come from the soil or be produced commercially. Phosphorus occurs naturally in the soil, and is mined from the soil and processed into a more concentrated form. Potassium is another nutrient that crops need to grow that can be applied as a fertilizer. Micronutrients are nutrients that are not present in the soil in large quantities; plants only use small amounts of these nutrients, but still need them to function. 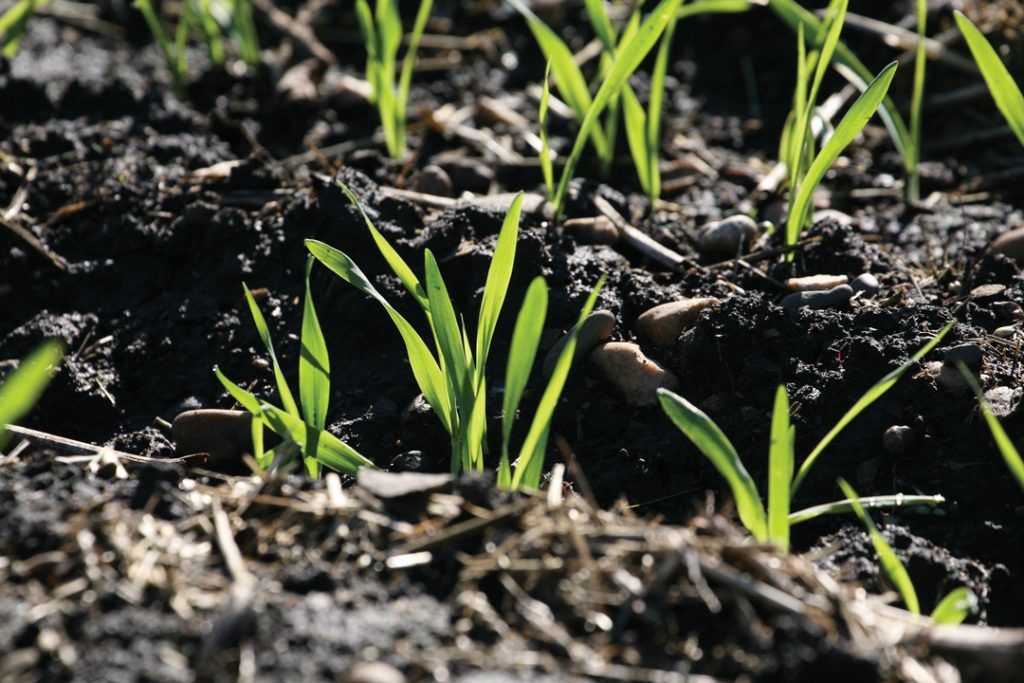 “Soil has a limited capacity to supply all of the nutrients that a crop needs,” said Michelle Nutting, manager of agricultural sustainability with fertilizer producer and retailer Agrium. “The link between soils and fertilizers is that when soils don’t have enough of all the elements that are needed to produce a healthy crop, then farmers are able to diagnose what isn’t there in the right amounts and add that to the soil in the form of fertilizer.”

Nutrients are the soil’s vitamins. Even if you eat a balanced diet, you might still be missing some of the essential elements. You might need extra vitamin D, for example, which can be added to milk or taken in pill form. Similarly, nutrients like phosphorus and nitrogen can be added to the soil. Whenever you eat a food product like bread made out of wheat, you’re actually eating nutrients that were stored in the ground.

Applying fertilizer helps farmers get the best production out of their land and the biggest crop possible. But in order to determine how much fertilizer they need, farmers need to test their soil.

“I take a sample of the soil from my field to get it analyzed for its nutrient content,” said Tuck. “This tells me how much available nutrient is in the soil before I decide how much I need to fertilize.”

Once he has his soil analysis, Tuck, who farms canola, peas and wheat on land settled by his great-grandfather, can crunch the numbers and make some decisions about how to balance the nutrients in his soil. It’s a delicate decision. Adding more fertilizer than the crop needs isn’t just a waste of money, it’s also a poor environmental decision because the unused fertilizer can leach off or seep into a waterway.

“When you have more nutrients in the soil than what the crop needs to grow, you have extra supply and the environmental conditions might cause the nutrients to move off the farm or field if you have heavy rainfall or erosion,” explained Nutting.

But there are also problems if Tuck doesn’t add enough fertilizer. If the crops don’t have enough nutrients, they might not grow as well as they could. “In different growing areas, the biggest factor that influences our fertilizer use is our average or expected rainfall. Crops require moisture to grow, and the more moisture we have (to a point), the more our crops will yield, and the more nutrients are needed to produce that crop and use that moisture,” he said.

“If I’m growing canola, in addition to the nitrogen, phosphate and potash fertilizer that I would put, I would also add sulphur fertilizer because canola uses a lot of it,” said Tuck. “On my farm, I have some poor-quality land and it’s not capable of producing a high-yielding crop. On those fields, I use less fertilizer because I can’t produce a crop and so it gets too costly to produce a crop where I am applying excessive amounts of fertilizer.”

Farmers live on the land where they grow food, and they need their soil healthy for environmental and economic reasons. Tuck’s family has been on the land for 100 years, and by managing his farmland properly, he’ll ensure that it will be passed on to future generations.

Responsible fertilizer use is part of making agriculture more sustainable. Using fertilizer is one way that farmers can make the most of their land and use it effectively.

Kryzanowski has conducted studies about fertilizer use in the province and has found Alberta farmers are using fertilizer responsibly. “In the vast majority of the province, the nutrient management is very good,” he said.

Added Nutting, “We’re trying to grow the most amount of food on the least amount of land possible.” Using fertilizer responsibly allows farmers to leave their land viable for wildlife habitat and recreational activities. Farmers are also consumers, and they read the same articles about environmental degradation and have the same worries as urban dwellers. They want to preserve their land and the health of the environment.

“You can talk to any farmer in Alberta and ask them where the most beautiful places are on their farm, and they can show you where the ducks nest and the deer cut through,” said Nutting. “There’s a lot of awareness of the environment on the farm and they really take care of that.”

October 4, 2016
Growing a successful crop is the perennial goal of a farmer. However, that’s just one small step in the bigger puzzle of... More
Prev Post ON THE ROAD AGAIN
Next Post THE GREAT DIVIDE