ENTERING THE MIND OF A FOOD STYLIST

Every time you see a Tim Hortons sandwich on a billboard, watch a McDonald’s commercial on TV or buy a box of frozen chicken strips because of how delicious the picture on the package looks, you are being influenced by the work of a food stylist. All around us are compelling images of food—each carefully selected to market a product to a specific end user. Whether the food in question is a pork chop or a pot roast, getting the perfect shot requires tremendous preparation, skill and creativity. Sue Spicer is one of the best in the business.

Spicer has been in the food-styling business for more than two decades and holds a bachelor’s degree in food and consumer studies from the University of Guelph. Her career began in Toronto with photography apprenticeships at Canadian Living magazine and McCann Erickson. She then moved to Calgary in 1986 to work with the marketing and advertising department of Calgary Co-op.

Today, Spicer is the owner of Food by Design, a food marketing and communications company she started in 1996. Through her company, Spicer runs sampling demonstrations, assists consumer education programs, develops recipes, and markets products at trade shows. Her work has appeared in countless print and television advertisements, cookbooks, public relations campaigns and educational videos. Spicer’s clients have included large food-service companies, such as Subway, TacoTime and Edo Japan, as well as a number of agricultural organizations, including Alberta Barley, Alberta Wheat Commission, Alberta Pork and Egg Farmers of Canada.

GW: How did you decide to become a food stylist?

Spicer: Nobody is at all surprised that I ended up in some aspect of the creative food industry. When I was four, I was out playing in the sandbox and I made a bunch of mud pies. I put them in the oven like I’d always seen my mom do, closed the oven and walked away. My mom then came in to make dinner and she turned the oven on to preheat. I was in a lot of trouble. Between that and apparently decimating my grandmother’s house plants for salad—thank God I didn’t eat it—it was always sort of known that I liked to muck around, and my preferred craft or creative outlet was food. My mother was also a food stylist, and I started working with her. She was one of the first professional food stylists. Then I went to the University of Guelph and took a degree in food and consumer studies, so I learned a lot more about why food behaves the way it does.

GW: What does a food stylist do?

Spicer: There are so many different areas a food stylist works in: commercial, editorial, cookbook illustration and media. So you work on all these different platforms. I tell a story, that’s what I do. A client will come to me and say, “We would like you to develop 100 recipes for us that fit these criteria, and we would like a photograph to go with each recipe.” The photograph tells the story of the recipe, and within that there is the propping, which is really important. If you’re telling a story about a really nice roast beef that you’re going to serve, you don’t put a bottle of ketchup in the picture. You’re trying to capture the viewer’s attention and build an “I can” moment—I can buy this, I can make this or I can eat this. That’s what food stylists do. They tell stories, engage, and capture and create “I can” moments with the end consumer. A food stylist affects you and your decision-making every day, usually many times. Isn’t that weird when you think about it? It’s marketing, and it’s a food stylist that’s been behind that. It’s not somebody saying, “Well, let’s slap an omelette on there.”

Spicer: We don’t fake out food anymore. It’s all real. Not that I would eat it afterwards, but that’s because it’s been so handled and sitting out. It hasn’t been prepared for consumption. It’s been prepared for photographs.

GW: What are the most important aspects of food styling?

Spicer: Lighting is huge. It’s the most important part. You’d think the food was, but you can make food that looks amazing to the naked eye, and if it’s lit incorrectly, what was the point? Then the second most important part ties into that—it’s great communication with the photographer. The photographer must be on board and engaged with the story we’re telling. You’ve got to be able to talk about what the story is, the intent of the project and the end user’s expectations, and build the lighting to honestly reflect that.

GW: What is it like working with so many agricultural
organizations?

Spicer: They’re my favourites. They often come to the table without an art director and an artist and a whole expensive team, so I’m valuable to them because I provide a lot of those little nuances. I love working with agricultural products because it’s just a real passion for me, personally. As a home economist, these are education moments. We’re doing educational videos, we’re doing cookbooks and we’re doing ads that really speak to what this product is for the end consumer. That end consumer is Canadians and their families. You’re showcasing the bounty, and I’m all over that.

GW: What’s something about your job that might surprise people unfamiliar with food styling?

Spicer: I think one of the most surprising things is the amount of education and the number of years of experience it takes to be a good food stylist.

GW: What knowledge and training is required to become a good food stylist?

Spicer: You have to be creative, in terms of understanding the basics of creating anything artistic, like colours, textures, all of that. You have to not just love food, but also work with food. You have to have cooked a lot of food, and you have to understand food technically. A lot of chefs make very good food stylists because they understand food from a technical level. If you are not a detailed, organized person, food styling is not for you. If something goes wrong, you have to be prepared to fix it immediately. I have a huge tool kit with all kinds of crazy stuff inside. I use a heater to cook steaks and burgers, and to put browning marks on. I’ve got an assortment of propane torches, really good knives and lots of funny little goofy things. There are lots of unusual tools that you collect over the years.

GW: What’s next for you in terms of future projects or career goals?

Spicer: I’d like to be more involved in the artistic direction of a food shoot and working on larger platforms. I love doing the styling, but I wouldn’t mind being on the other side of the camera sometimes and saying, “Yeah, that looks good.” But I’m very happy to do what I do, which is working with a fabulous, developing food industry. It’s natural for Alberta to be growing more into the food industry, and creating those images for the end consumer is a huge part of that industry, so I’m just really excited about that future. 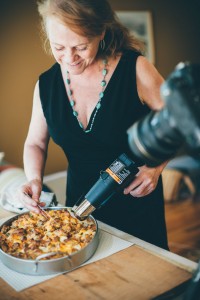