The insect world is large, ambiguous and even violent.

There are bugs that prey on valuable crops, insect-o-predators that devour those pests, and critters that simply sit on the sidelines, ingesting the waste created by their counterparts. Despite their different roles, each insect is part of an ecosystem that assists in crop development. In fact, the majority of insects benefit the soil.

Scott Meers has always been fascinated by the relationship between insects and the land. As a young boy, he would rummage through fields, poke anthills and inspect wildflowers on his family farm near Acadia. He turned childhood curiosity into a career as an entomologist with Alberta Agriculture and Rural Development (AARD). His analysis hasn’t stopped, but it has become more technical. Meers works with about 300 different co-operators each year who provide information to him, which he uses to help inform farmers about things to watch for.

As one of AARD’s top entomologists, Meers informs farmers of the season’s pests through live, dynamic maps online. His knowledge is crucial—when it’s time to strike a pest that nature can’t defeat, Meers is ready to advise on how best to handle the vermin.

GW: What inspired you to become an entomologist?

Meers: I’ve worked a number of years with producers. I was a crop specialist and a district agriculturalist before becoming an entomologist. Compared to weed control, we didn’t have a lot of information on insect control to make good decisions. So I really wanted to further explore that.

Insect control is a fascinating area. There’s a lot of cool stuff that happens with entomology. There’s just such an ecosystem in fields. It’s never just the pest—it’s the pest and its natural enemies. There are a lot of factors at play with insects.

GW: Which insects really fascinate you?

Meers: I think every insect is fascinating in its own right. They’re a result of a long line of evolution. My interest comes from questions like, ‘What makes an insect able to find a perfect place to lay eggs? And find a crop that it prefers to attack over just anything random?’ And, ‘How does a natural enemy of a wheat stem sawfly find that sawfly and take advantage of it?’

You can almost look at any insect and say, ‘Wow. How did it work that out?’ It’s just generations and generations of evolution that specialized them to be the way they are. The diversity and sheer volume of insects also amaze me. If we really sat down and thought about it, together insects have a real lot of biomass.

GW: Are they all as bad as people think?

Meers: The vast majority of insects are beneficial or neutral. We only have a handful that are pests. It’s kind of interesting because our first impression of all insects is that they are bad. That’s certainly not the case.

GW: What do beneficial insects do?

Meers: If an insect is a specialist like a parasitoid, it kills off pests. That’s their job. It’s how they make their livelihood: feeding on the pest.

GW: How many problem insects are there on the Prairies?

Meers: We have seven major insect surveys we do each year. One is a grasshopper survey containing several different species. There are several dozen that could cause trouble. But there are about 10 or a dozen species that give us real trouble.

Meers: We have some of the same old ones. Wheat stem sawfly was first found in the 1800s in Manitoba. We’ve had grasshopper problems since the time we settled in the Canadian Prairies. So we have everything from those to newer ones like wheat midge, which has been a problem in Alberta for the last 10 years. And there’s swede midge in Saskatchewan that’s causing trouble. It hasn’t been found in Alberta yet.

What’s different is we’ve seen a new pest every couple years—and that’s a concern. The new pests seem to be introduced from somewhere else, whereas grasshoppers, wheat stem sawfly and bertha armyworm are residents of the Prairies.

GW: Do we know how these pests arrive?

Meers: Each one will be different. As soon as we make a generalization about an insect, some other insect comes along and breaks the rule of what we know. That’s a constant with insects: if you think you know everything, then there’s always something that will surprise you. 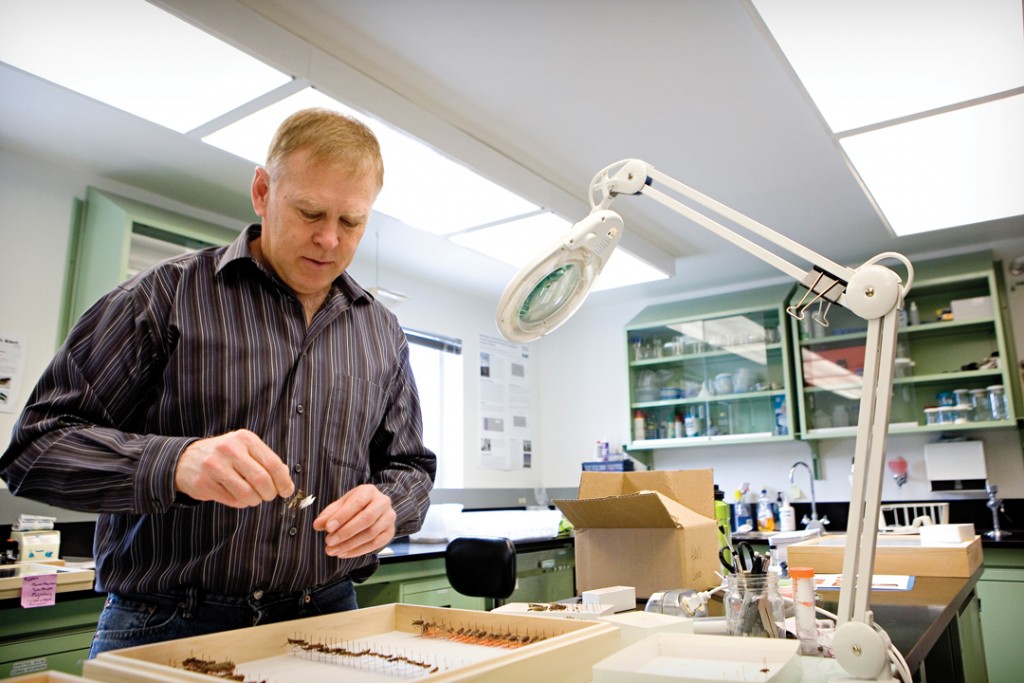 GW: How should farmers treat insects?

Meers: If they’re costing us money, then we have to take the appropriate action. Now, that may be a choice of the right variety or a spray. But, I’m also convinced we should be paying attention to thresholds, and only acting on problems when they reach or cross those thresholds. More often than not, Mother Nature has something that’s attacking that insect. And that works in our favour, rather than against us.

GW: Have farmers ever inadvertently killed good insects while spraying for pests?

Meers: That’s been well documented, not so much in our field crops, but certainly in crops like apples, where you spray out one insect and cause another one to become more common. We’re suspicious of that happening with a number of insect species in our field crops.

GW: Have you ever had to immediately deal with an extreme pest population that was quickly moving to devour crops?

Meers: Yes. I think timing is critical with insect control. One example is bertha armyworm. Throughout bertha armyworms’ cycle as larvae, they aren’t causing much economic damage. But when they move up onto the pods and start feeding on them, we have to move very quickly. If we fail to do that, and if there are enough of them, then we can lose crops. And we have seen that happen.

GW: Should you spray for bertha armyworm once they are up onto the pods?

Meers: In that case, yes. But we are aware of several natural enemies that do a very good job of controlling bertha armyworm in the long term. We promote the message, ‘Spray if you have to, but let Mother Nature look after the population.’

GW: Is your research moving in the direction of finding other alternatives to control pests, instead of just using insecticides?

Meers: In my view, pest management has to be integrated. If we can use natural enemies, we do. If we can focus on cultural practices like seeding dates and seeding rates, and growing certain varieties, we will. In moments that require spraying, we will use them. We look at insect management more systematically, rather than just firing insecticides.

GW: How have farmers’ perceptions on sprays changed over the years?

Meers: I think they understand better. We’ve had good research over the years, but we also have more examples that we can show farmers to help them understand. It used to be that we didn’t really know why insect populations cycled more frequently and why they became problems.

Farmers also don’t like to use insecticides if they don’t have to. They cost money and have health risks associated with them. They will only use them if it makes them money.

Better information usually makes for better decisions, and that’s why we are getting better crops.

GW: What are the next big pests farmers should brace for?

Meers: It could be something that’s not a pest anywhere else in the world that ends up here, and decides to go crazy and devour our crops. We just don’t know what that might be.

Although, swede midge is causing big trouble in Ontario. That could be a problem for Prairie canola, if it comes here. The pollen beetle is also causing trouble for canola in the Maritimes. That could be trouble for us. We watch for that, but you just don’t know what you might stumble across.

March 11, 2015
There is nothing worse than having all your iron prepped and ready for action only to be stalled by glitchy electronics.... More
Prev Post THE FARMGATE
Next Post A KEY FOR ALL DOORS 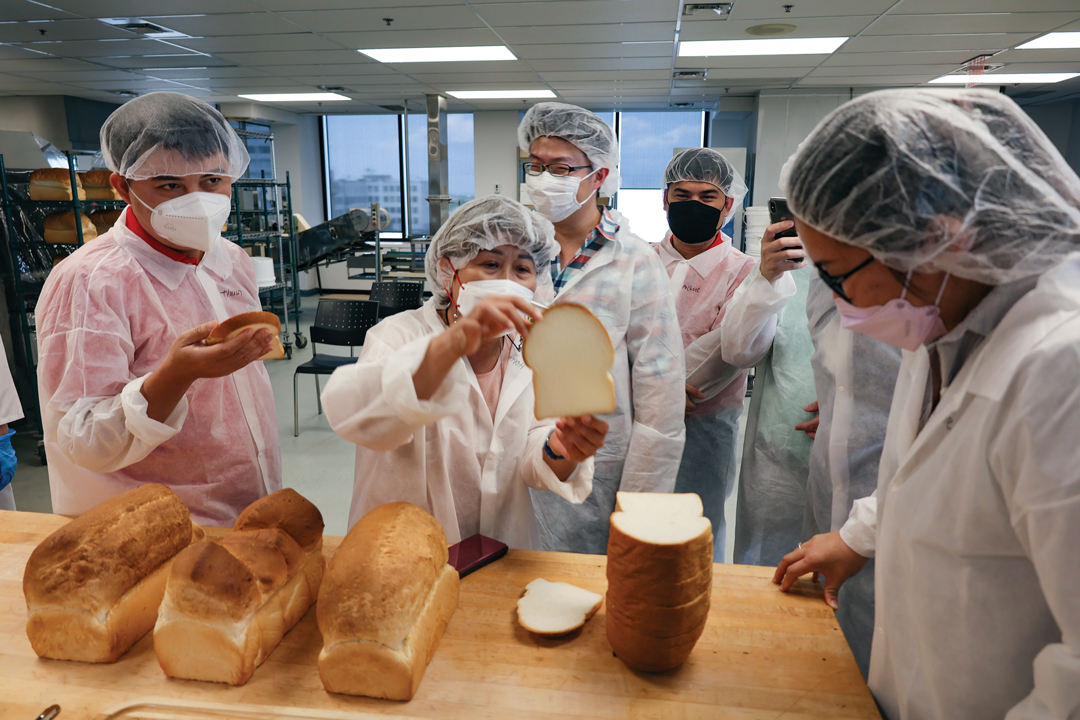