RECYCLED MATERIALS ARE THE HEART OF INVENTOR'S CREATIVE PROCESS

Like his hero Henry Ford, Vermilion-area farmer, entrepreneur and self-taught mechanical engineer Danny Farkash aspires to reinvent existing machines and make them better. This past spring, GrainsWest visited the sprawling farmyard where he operates the thriving ironworks division of Noralta Farms and works on numerous side projects such as a portable sawmill operation and biodiesel factory.

Farkash clattered up the grated stairs to the top deck of his latest and most spectacular device, a wood-fired plastic fencepost maker fed with used grain bags. He tells the story of its three-year construction process and used parts procurement with infectious enthusiasm. Nearing completion with a flurry of recent alterations, it is now in its fifth iteration. With it, Farkash intends to manufacture the cheapest plastic fenceposts on the market—posts that are durable yet can be sawed and stapled just like their wooden counterparts.

A cross between a wild vehicle from Mad Max and a circus cannon meant to blast acrobats high above the crowd, the machine is largely made of iron piping of various diameters. Despite its fantastical appearance, it is deceptively practical and elegantly simple to operate, a credit to Farkash’s engineering process. Equally impressive is the commitment to recycling it represents. “For good or bad, all of this is made of scrap,” he said.

At heart, Farkash is a problem solver. This machine built of repurposed parts is a solution to the problem of abundant waste plastic. As a cow-calf operator, replacing rotten and broken wooden fenceposts every handful of years is a job he hates. “You see all these fences across Alberta,” he said, shaking his head. “With plastic fenceposts, we could save a lot of trees.”

Farkash admitted he is not the first to produce plastic fenceposts, but his method is unique. Like Ford, he retooled an existing machine and created a new manufacturing process. “I’m not reinventing the wheel,” he said. “I’m just good at taking a wheel and making it turn in a different way.” As Ford did with cars, Farkash intends to do with fenceposts: streamline their production and produce them at high volume and an affordable price. Plastic fenceposts are currently more expensive than wooden ones.

According to the Agricultural Plastics Recycling Group, Alberta farmers annually generate nearly 2,000 tonnes of used plastic grain bags. This material is typically too dirty to be processed by most recycling companies, so much of it winds up in landfill. “That’s a huge amount, so if you imagine that keeps going into dump sites, it’s crazy,” said Farkash.

His intent is to create an energy-efficient production process that can produce a post per minute, and he believes he has finally done so. With
a bit more tinkering, his fencepost maker should be ready for business later this year.

Farkash took up recycling plastics as a serious side project after an acquaintance made an offhand comment about the need to save agricultural plastic from the dump. He will use grain bags donated by three nearby farmers to produce his first commercial fenceposts. A short distance from his invention, heaps of the rolled black-and-white plastic bags are stacked next to rows of used wooden pallets. These pallets are the fuel source for the machine and are sourced from nearby retail businesses. A metre in diameter, several plastic rolls were lined up on a conveyor, still under construction. Once complete, it will tip the plastic bales into a breech in the central barrel, a four-metre length of new oil pipe Farkash bought at a salvage sale.

Dirty plastic cannot typically be used in post making, as grit dulls the blades used to cut the plastic. This is not an issue with Farkash’s machine, which has no cutting tools. Owing to their dark colour, impurities are not visible and do not affect the structural integrity of the post.

The machine’s central pipe is heated by a pair of furnace tanks attached beneath it. These are fuelled with whole wooden pallets inserted by forklift. The fires are fanned so the hardwood frames burn clean. As the temperature climbs above 200 C, the plastic in the pipe above liquifies. In 1,100-litre batches, it is forced down the barrel. This is done by means of a device known as a PIG, which is pushed by a hydraulic ram. An acronym for “pipeline inspection gadget,” such devices are used to move residual oil down pipelines and may look something like wheeled beer kegs. This PIG moves on rollers and is tipped with a rubber membrane that seals the pipe and builds internal pressure that extrudes the plastic out the bottom end of the machine.

Mounted on a carousel, a series of tubular steel moulds swings past a single extruder nozzle. Each in turn is filled with liquid plastic and submerged in a water tank. The temperature change causes the plastic to shrink away from the wall of the mould slightly. As the moulds emerge from the water bath, a high-pressure air nozzle swings into place at their pointed end and neatly shoots the finished post into a waiting basket. This catcher unit then stacks the finished posts in a metal-framed rack. Farkash demonstrated the process with a post he’d made earlier. The seven-foot posts are 4.5 inches in diameter and the colour and texture of a hockey puck. They are cylindrical in shape with a pointed bottom end.

Farkash monitors the process from the comfort of an air conditioned control shed. Adjacent to the mould carousel, the brown-panelled building features a smooth, white control panel with levers and switches labelled by hand in black permanent marker. This is positioned below a large window and a video monitor that displays a series of camera angles that encompass the entire fencepost maker.

As he leans back from the controls in an repurposed car seat, Farkash adjusted his red-checkered welder’s cap and crossed his arms as he recalled the three years of hard work he has put into this machine. A previous prototype used a straw chopper and swather components to shred the plastic prior to heating it. A step taken by other plastic recyclers, Farkash determined it was a waste of energy because the rolls can be fed into the unit whole. He clearly relishes such simplifications. Ease of process paves the road to profit.

Because Farkash can use soiled plastic, farmers and agricultural companies from across North America have called with offers to send him plenty of it. Oil companies that use high-density polyethylene pit liners also want to donate plastic. The counties of Vermilion River and Minburn have provided standing verbal agreements to supply him with plastic when the time comes to begin mass production. He has already lined up buyers that include several stores in B.C.

In the meantime, Farkash continues to fine tune his ambitious project. The major troubleshooting phase is behind him. Earlier frustrations included the melted plastic cooling too quickly and becoming stuck in the extruder. To re-energize his inventiveness, Farkash has taken occasional breaks from working on the machine, which has allowed his ideas to percolate. The satisfaction he feels when he devises a successful solution to a nagging problem keep him returning to the challenge. “With everything, we try it. If it doesn’t work, we take it apart and we do that thing again,” he said.

The fencepost machine is set up in a corner of Farkash’s farmyard he refers to as his mad scientist’s laboratory, an area where creativity and innovation collide. This tight clutter of machinery and materials also includes a Quonset-style machine shop in which much of the fabrication for his ironworks business is conducted.

Raised on his parents’ farm, Farkash has lived in the Vermilion area his whole life. His own farm was much larger in years past, but he now tends cattle and a mix of crops on 400 acres. His iron fabrication business has become his main focus. He and two employees, former oil and gas sector welders, produce a steady supply of cattle panels, feeders and wind fences constructed of reclaimed steel oilfield pipe. The wind fences incorporate cedar planks manufactured with Farkash’s sawmill from discarded telephone poles.

Key to the operation is another Farkash invention, a machine that straightens the piping, which comes to him coiled up on massive wooden spools. Powered by an electric hydraulic pump, it uses 36 rollers to straighten the metal. A cutter fitted with a segment of grader blade, and also powered by hydraulics, shears the metal into desired lengths. He has built an additional device to flatten and shape smaller individual components. The demand for these cattle yard products has grown steadily over the last eight years.

A history buff, Farkash derives inspiration from great inventors of the past, Ford included. As he works on individual projects, he also watches YouTube videos posted by fellow inventors. “They may have one good idea,” he said. “If you can take that idea and link it with something else that might be the missing puzzle piece, that makes the whole picture work.”

Unlike Ford, who apprenticed under a machinist, Farkash picked up his interest in mechanics from his brother Ken, also a farmer. Ten years his senior, his brother taught him how to fix cars when he was a kid. “I was kind of a reluctant learner, but he inspired me.”

Though the ironworks business doesn’t allow much free time, Farkash spends many of his spare hours on this and other inventions. “I think my wife would like me to stop doing this,” he said with a laugh. He and wife Rhonda have four adult daughters.

In addition to fenceposts, Farkash would like to someday make plastic power poles and railway ties, which he believes would save governments, railways and energy companies billions of dollars while lending the environment a substantial hand.

“It’s not enough to have a good idea,” he said. “You must do something with it.”

January 4, 2023
The job of an agricultural analyst is to have an opinion on every topic and an answer for every question. And most of us... More
Prev Post NEWLY EQUIPPED
Next Post RETURN TO SPENDER 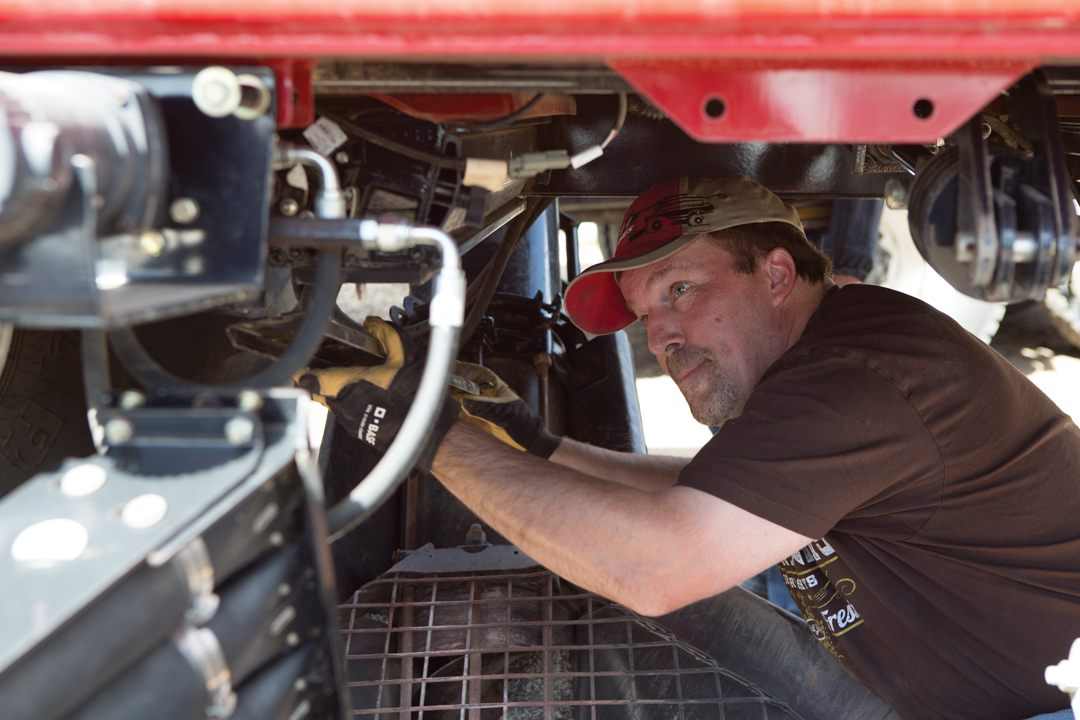 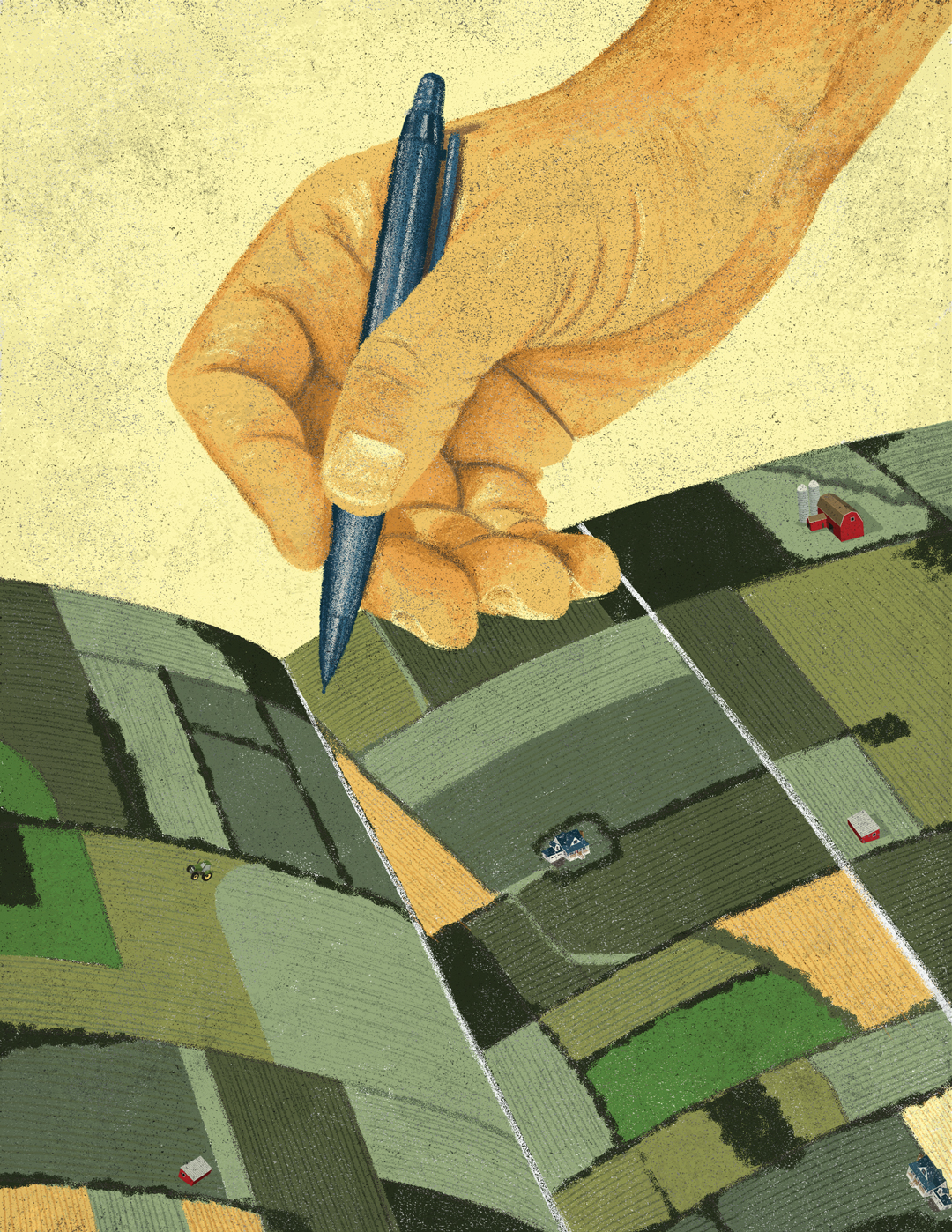