Knowledge is everything in controlling a difficult pest such as wireworm. “You’ve got to know your enemy,” said Haley Catton, Agriculture and Agri-Food Canada (AAFC) research scientist. With funding from the Alberta Wheat Commission and the Western Grains Research Foundation, she has led a three-year project that will produce a huge amount of wireworm data and contribute to integrated management approaches.

“To know where and when it’s a problem and what its vulnerable life stages are, is very important,” she said. With this information, control can better emphasize the use of field monitoring, crop rotation and biological solutions with the option of chemistry when required.

The larvae of the click beetle family, of the 100-plus species that live in Alberta soils, only four or five wireworms attack crops. This large family of insects has been studied on the Prairies since at least the 1920s, said Catton. Though much is known about wireworms, she says a great deal of basic information is missing. One reason for this is each click beetle species has varying lifecycles and behaviours, which complicates their study. Living in the soil anywhere from one to 11 years, they’re also simply hard to find. Even when they cause crop damage, they may leave the scene of the crime by burrowing down.

Catton’s study will address many unknowns about wireworms. For instance, it’s not clear where female click beetles prefer to lay their eggs and if they prefer certain crops. “Where she lays her eggs will determine where the future wireworms are going to live,” said Catton. Also among the study’s ambitious objectives, is to determine if crop rotation affects wireworm infestation due to the fact the worms live for multiple years.

Sampling was carried out on 12 spring wheat fields identified as likely having wireworm problems. Each was sampled in a wheat year that was preceded by wheat-canola, canola-wheat or pulse-canola. “We rotate with so much canola here, I wanted to see if canola had any affect on larvae populations,” said Catton.

Such revelations will benefit farmers. “That can tell us what the risk factors are for having an infestation,” said Catton. Farmers will be able to better judge when the use of chemical control will be most effective and when it will not. “If we can predict where the problem’s going to be, we can keep an extra eye on those fields to see if they need control,” said Catton. As well, in determining methods to interrupt the mating cycle of adult click beetles, the insects may lay fewer eggs. This would result in fewer wireworms in the soil.

Catton emphasized that the project was not a field survey, but involved intensive weekly sampling during the growing season, using worm traps and soil cores. While counting and identifying wireworms, her team is doing the same for beneficial insects such as ground beetles with the aim of similarly determining how they’re affected by crop rotation. 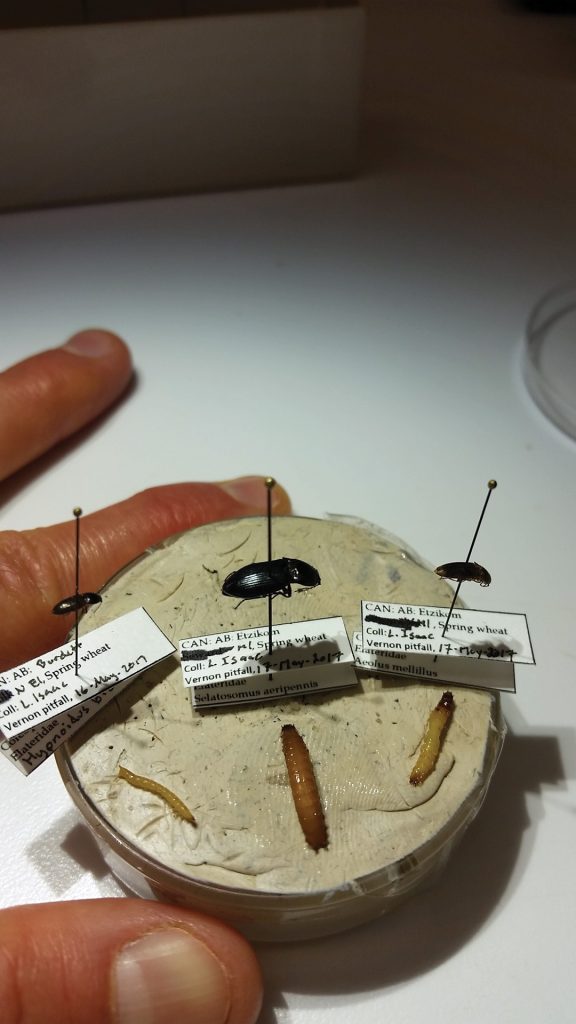 Haley Catton displays the larval and adult forms of the three most common wireworm species her project has identified in southern Alberta. From left to right, they are Hypnoidus bicolor, Selatosomus aeripennis destructor (common called prairie grain wireworm) and Aeolus mellillus. Photo courtesy of Haley Catton.

Each insect collected in 2019 is now being laboriously identified under a microscope. The research team will identify patterns that emerge from the data, and results will be published within two years.

The non-chemical emphasis of the study addresses the inherent drawbacks of chemical control, such as cost, the development of insecticide resistance and environmental impacts. Catton said it’s a positive development that new wireworm chemicals are coming out, but with integrated control strategies, farmers can use them more effectively.

With neonics merely impeding wireworm activity, there has been incentive to make new insecticide options available. Teraxxa by BASF is one such product aimed at wireworm in cereals. Anticipated to be released in 2021, its Group 30 active ingredient is broflanilide. Affecting the central nervous system of the insect, it causes paralysis and death, the company claims.

Another newly available seed treatment is Corteva’s Lumivia CPL, the active ingredient of which is Group 28 insecticide chlorantraniliprole. It was launched commercially in February of this year. Though the ingredient has been available in other Corteva products for a few years, Lumivia is aimed at wireworm and other pests in cereals, lentils and peas. Also a seed treatment, it is aimed at early-season control. According to the company, it paralyzes the insect’s muscles, leaving it unable to feed and killing a portion of the population.

“[Pesticides are] not a silver bullet,” said Catton. “We’ve got to approach this from an integrated way. We don’t want to rely on just one method, because if that method fails, it’s back to square one.”

WORMING OUR WAY FORWARD
“This isn’t the end for our wireworm work,” said Catton. “I see it as more of a beginning.”

She said the results of this complex study will suggest the exact direction further wireworm research will take. Future projects will evolve around integrated pest control methods and refine the use of wireworm control chemicals.

“The goal is to give producers tools and options to manage the pest,” she said. “We’re lacking tools and information. We don’t even have economic thresholds for wireworms. If you did a trap in your field and you found some wireworms, we don’t know how many you need to find to make an economic difference.”

In the meantime, farmers can expect new educational materials. To be completed in the immediate future, Catton and her colleagues are writing a wireworm field guide. In plain language, it will detail everything researchers know about the Prairie members of this insect family. The publication will include details on their various lifecycles, the problems and limitations presented by control methods and high-resolution photos of the main species. The guide is expected to be released later in 2020.

January 10, 2022
Prairie winter wheat acres have declined for years, but interest in the versatile crop has been revived. Its renewed app... More

January 10, 2022
While fertilizer is critical to keep farmers in the black, many see red as its cost has greatly increased. As prices are... More

January 10, 2022
It came without warning. Prairie farmers were dealt the environmental version of poker’s 7-2 off-suit: drought condition... More
Prev Post FLOW OF IRRIGATION MONEY TO BE MAINTAINED
Next Post HOW THE MIGHTY HAVE FALLEN 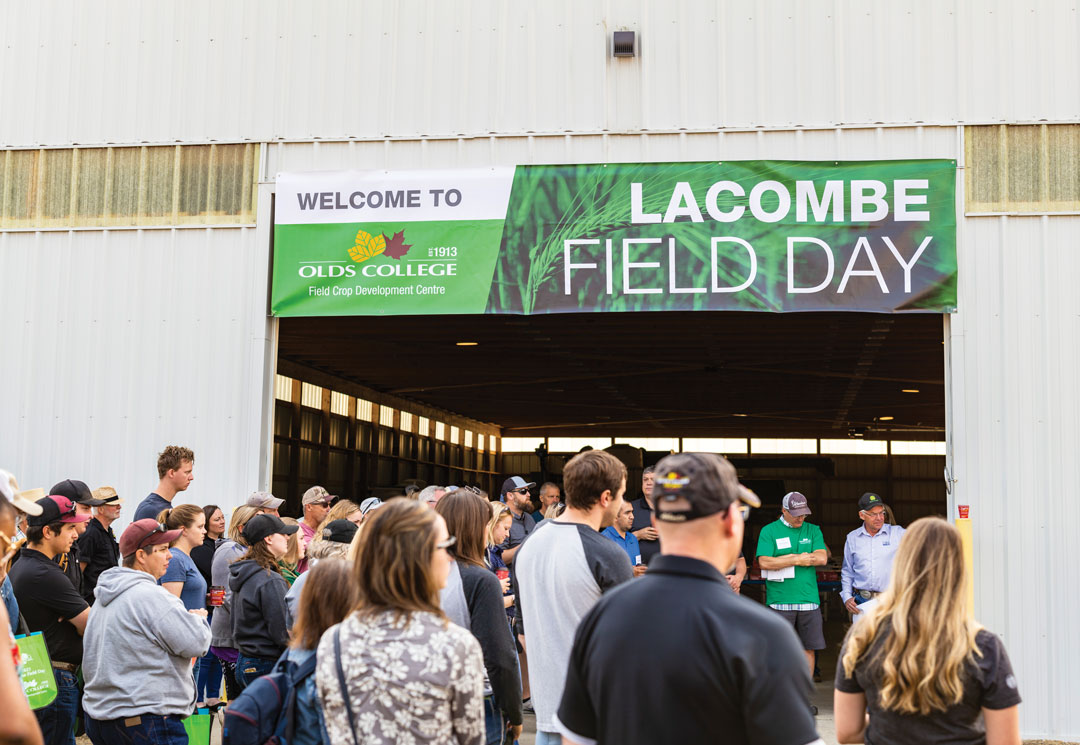