Public trust is a funny thing. You can’t touch, taste, smell, feel or see it, but it’s there. It’s always there. With no concrete traits, the concept of something as large as public trust can be hard to gauge, yet it has become increasingly important to people and companies across all Canadian industries.

In agriculture, this communal confidence often boils down to a handful of wide-scale concerns, according to the latest data from the Canadian Centre for Food Integrity (CCFI). The Guelph-based non-profit focuses on providing clear, unbiased information to average consumers related to Canada’s food system and to provide those consumers with an articulate understanding of Canada’s food system, from farm to fork.

Its 2017 public trust research was released this past September at a summit in Calgary, and the big takeaway was that Canada’s food system has made sizable gains. Of the 1,300 Canadians surveyed, 43 per cent believe our system is moving in the right direction (up from 30 per cent in 2016), while another 43 per cent are unsure (50 per cent in 2016) and only 14 per cent would say it’s headed down the wrong track (21 per cent in 2016). All of these are positive indicators if you ask CCFI president Crystal Mackay.

“When you see a shift, it means something, because data is consistent year over year,” she said. “There’s good support and love for Canadian food and farming, trust in food safety, and access to information. Those are all pieces.”

Of those polled, six in 10 identified two issues as front and centre: the rising cost of food and keeping healthy food affordable. Even as demographics were broken out into cohorts of moms, millennials and foodies, these two concerns didn’t budge. In fact, the answers remain unchanged from last year, and were both ranked higher than questions related to health care and the economy. “I’m surprised they maintained the top two positions,” said Mackay. “The public has just reminded us of Maslow’s hierarchy of needs. We sometimes forget how important it is to feed our country.”

Among other survey results, respondents appear to have genuine worries about many of the same issues as farmers. Fifty-one per cent of people said they were concerned about the use of hormones in farm animals, up three points from last year. And 48 per cent of people remarked that they are concerned about the use of pesticides in crop production. Despite all these concerns, 49 per cent of Canadians still said they trust food produced in Canada more than that produced in other countries. That can be a big opportunity or a colossal failure, depending on whether you view the glass as half full or half empty.

“This is being served up on a plate,” said Mackay, regarding the number of consumers searching for information. “I’m an optimist. I think with Canadians and earning public trust, our sector is in a position of strength.”

She added that consumers want to engage with people in Canada’s food system, but they don’t know where to begin. It’s about putting yourself out there, in her estimation. “Our public is saying, ‘just because we don’t know about farming doesn’t mean we are idiots,’” she said. Our public is saying, ‘we’re valuing trustworthy information.’ When people Google information, they’re not finding it.”

The report’s findings don’t raise the eyebrows of Sylvain Charlebois, however. The dean and professor of food distribution and policy studies at Dalhousie in Halifax, NS, said Canada is not an equal playing field.

“In B.C. and Quebec, the discussion around the future of food in general, it’s a little bit more elaborate than in other places around the country,” he said, adding Alberta was better than average, but not in the top tier.

Charlebois credits the CCFI for taking charge of the conversation and documenting how consumers feel regarding Canada’s food system. As a professor of mostly millennials, Charlebois knows that the next generation is the one the industry needs to watch out for.

Two issues that come to mind for Charlebois are that policy can only react and governments are ignorant. “Policy is always trying to adapt and catch up to industry,” he said, adding that with governments, “they do not tend to learn from other governments.” He cited the mad cow disease crisis of 2003 and the Listeria outbreak in 2008 as two preventable examples had the Canadian government learned from other countries as they suffered through similar crises.

Closer to home, Mackay encourages farmers and others in the food system to continue to advocate and tap into established channels instead of reinventing the wheel regarding food. “We haven’t stepped up to give the good news,” said Mackay of farmers and their sustainable practices. “We’re too busy farming to talk about it.” Add your voice to local Rotary club and Facebook group discussions, she advised.

“It’s time to come together, look at all tactics, look at it through a public trust lens and how can you best amplify it if you put it together with something else,” she said. “People are saying it’s a priority. Now we need to position it correctly.” 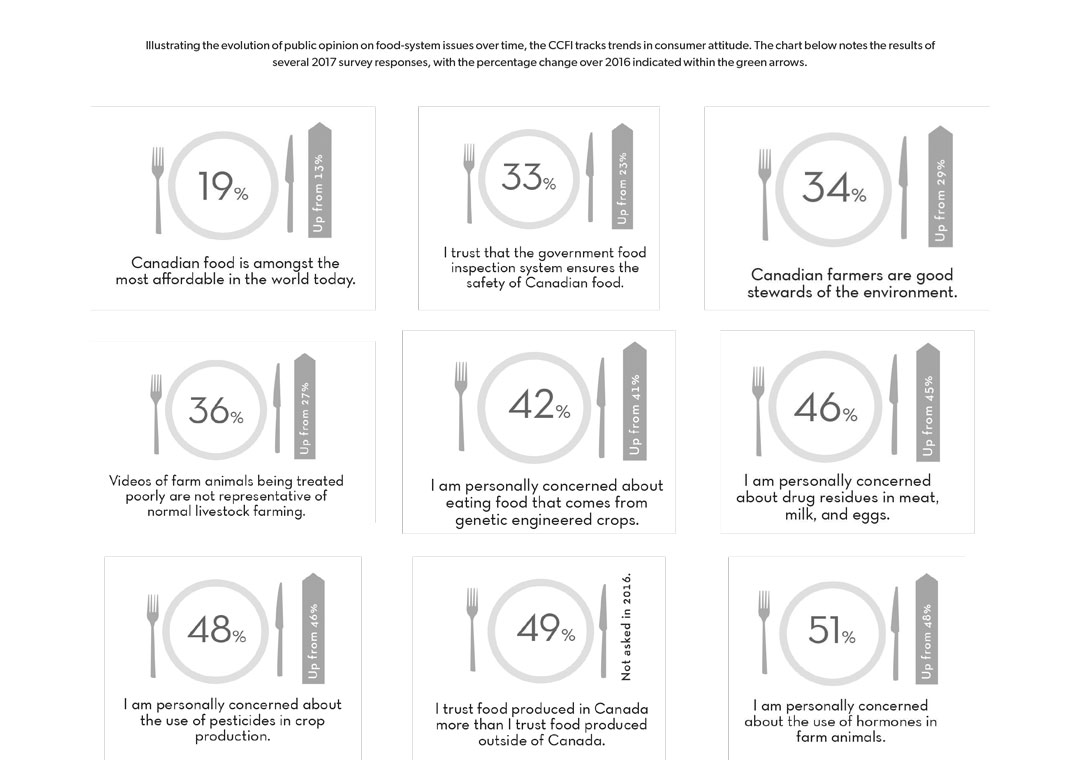 STRATEGIES FOR THE GAME OF LIFE