For grain exporting nations like Canada, identifying grain quality for sale is a vital step in the successful marketing of a crop. Being able to segregate the crop by quality, and being able to maintain those segregations through the handling system and into the end user’s control, facilitates the export of grains as well as price determination. In Canada, this system was written into legislation in 1874 and is currently regulated by the Canadian Grain Commission (CGC), a federal government agency, under the Canada Grain Act.

The CGC ensures certain criteria are met in relation to grading: Commercial relevance, an efficient process with consistent, reproducible results, and an acknowledgement of grain quality by farmers from growing regions across the country.

If a system is well run, it will theoretically give buyers a quick and true look at protein content, as well as any and all factors they may take into consideration during their particular manufacturing process. This takes a coordinated effort on all sides, whether dealing with the huge volumes in 2013 or the unpredictability of 2014.

This past harvest, farmers brought the conversation online, talking up storms and posting photos on social media and agriculture forums discussing degrading factors—from freak snowstorms and diseases to low test weights and atypical grain appearances—all of which underscore the need for an accurate, professional grading system.

A farmer will typically first meet the grading system head-on when delivering grain to an elevator.

“In the post-Canadian Wheat Board (CWB) era, any grain being delivered to a primary elevator is usually already designated for a sale,” said Daryl Beswitherick, program manager, quality assurance standards and reinspection, at the CGC. “Elevators are now responsible to buy farmers’ grain, not just handle it on behalf of the CWB, so the onus is on the elevator to ensure the grain received is going to meet the specifications set out in the sale.”

The grain will then be loaded into rail cars and shipped to port or to a domestic or U.S. end user.

“The CGC will provide a ‘Certificate Final’ for all grain loaded onto a vessel,” said Beswitherick. “If specifications are required in the contract or a particular grade and protein, the CGC will ensure the load meets the specifications.”

Beswitherick explained that peas and malting barley, for example, are most often sold by “shipment by specification,” whereas wheat is sold by a regulatory grade.

“Buyers know what a No. 1 Canada Western Red Spring is,” explained Beswitherick. “The grade describes the functionality of the wheat and how it will perform for the buyer.”
THE GGC’s ROLE
The CGC is a key part of Canada’s grain grading system with very specific mandates legislated by government:

• Maintaining the grain-grading guide, the complete reference on the grading of grains, oilseeds and pulses, and gathering input from the Eastern and Western Grain Standards Committees to revise and update the guide annually. Both committees are made up of representatives of stakeholders such as growers, grain handlers and end users, and changes are made on the basis of consensus.

• Preparing standard and guide samples for the industry on an annual basis and as necessary. For example, the 2014 mildew problem has not been encountered for two or three years. Guide samples refresh the standards for grading mildew for those on the front lines.

• Official weighing and inspection at shipping ports, and issuing Certificate Finals to certify that cargoes meet the specifications of the sale contracts.

• Performing a monitoring function using the expertise of the Grain Research Laboratory and Industry Services branches. Example outcomes of monitoring include: Italy’s approval of protocols for pre-shipment testing of ochratoxin (OTA) in wheat and durum for export; China’s acceptance of ongoing shipments of peas based on the CGC’s statistics for selenium levels; and the ongoing collection of pesticide residue data, which provides assurances to buyers of Canadian grain.
THE FARMERS’ TAKE
Gerard Oosterhuis farms near Bow Island, about 150 kilometres from the U.S. border.

“The key, in my opinion, to marketing grain is to know what you have,” said Oosterhuis. “We put a lot of effort into sampling when we transfer grain to our bins at harvest, and we get third-party grades on the resulting samples. We are very confident that those grades are representative of our production, and our marketing success over the years bears that out.”

Oosterhuis shops his samples around to three Canadian and two U.S. companies.

“I can’t say I’ve ever had an issue with a grade at a delivery point,” said Oosterhuis. “If I’ve ever not been happy with it, I’ve always been able to work it out, mainly because I am confident my samples truly represent my production. I’ve never officially contested a grade.”

“Where I deliver in the U.S., the grading is not done at the driveway, but at the state lab,” he explained. “There can be significant delays in getting grades back.”

Oosterhuis noted that, although there are differences north and south of the border, they go both ways.

“In the U.S., they do falling number analysis on samples,” explained Oosterhuis. “Here, we use visual indicators to estimate falling number and there are times when it is far more beneficial for me to sell my wheat in Canada. The onus, in my opinion, is on the farmer to understand both grading systems, understand there are pros and cons to both, and then he can make better decisions about where to market his grain.”

Jeff Nielsen farms at Olds, in an area where quality can regularly take a beating due to the climatic conditions.

“You have to know what you have to market,” said Nielsen. “I always take my grain to at least three companies, and I take it out of my own area as a double-check on the grades.”

While Nielsen streams samples when the grain is transferred to the bin at harvest, he generally does not get an independent third-party grade on it prior to shopping it around.

“In all my years farming and marketing my production, I’ve never had a grade dispute,” said Nielsen. “That said, don’t be satisfied with just one person grading your sample, especially this past year when there is definitely some variability.”
THE GRAIND HANDLER
“Understanding crop quality is very important to us,” said Lynne Sweeney, assistant vice-president, quality assurance and food safety, at Richardson International. “The more we understand about the physical and intrinsic attributes of the crop, the better we are able to collect and assemble individual commodities and anticipate how they will perform in processing environments consistent with end-use customer needs.”

Additionally, Sweeney noted that companies that market grain also have to manage food-safety risks and requirements to comply with import regulations in the various countries where they sell grain.

Richardson’s frontline staff work to accurately interpret and verify the quality and food-safety characteristics of the crops they market, according to Sweeney.

“A discount or cargo rejection due to a quality or food-safety deficiency is a risk we can’t afford from a financial and quality-assurance perspective,” said Sweeney.

Staff at Richardson facilities use globally recognized food safety certification schemes (such as hazard analysis and critical control points, or HACCP) and train to stay up-to-date with national and international standards, Sweeney said. Furthermore, the company employs a corporate calibration program to routinely validate the accuracy of its equipment.
THIRD PARTY OPTIONS
There are a number of third-party providers in the grain-grading business in Canada. These companies grade based on the Canadian or U.S. grading standards, take samples, provide training and serve any number of other functions on a fee-for-service basis.

Norm Woodbeck is the manager of agri-operations for Canada at Intertek. Prior to taking on this position, he spent 37 years at the CGC, where his final posting was as acting chief grain inspector. His vast experience in grading stretches from coast to coast, and everything in between.

“This year is a classic example of what happens in our business,” said Woodbeck. “We’ve gone three years without any major weather issues causing problems, and this year we are seeing the full gamut. I have to work very closely with our inspectors to identify the problems and assess them properly.”

“The grain companies, ourselves and anyone who inspects grain needs to be training every year,” said Woodbeck. “Grain inspection is an art, as well as a science, and it’s only with years of experience that an inspector gains enough knowledge and exposure to become really confident. Even now, every day for me is an opportunity to learn, after 40-plus years in this business.”

Post-CWB, farmers have the opportunity to truly saturate themselves with the vagaries and quirks of grain grading, said Woodbeck.

“You are now the marketer,” he said. “It’s your responsibility to know your production—certainly protein, grade and moisture content. Dockage may vary. And you can also find out if your grain is a good, fair or poor representative of whatever it grades. That gives you more information about its blending capacity.

“The single most important factor in grading grain is the sample,” he added. “The best inspectors and the best equipment can be used to grade the sample, but if the sample is not representative of the bin, then it’s all useless.”

Woodbeck advised sampling every truck, understanding what is going into the bin, and knowing the inherent variability that exists in the grain in
every bin.

“Variability is always part and parcel of inspecting grain,” he said. “The problems generally arise at the break line for a grading factor.

“I encourage farmers and producer groups to really understand our system of grain inspection, as well as that in the U.S.,” he explained. “Both are science-based, but both are also very different, using different protocols and methodology to measure the same factors, like protein, moisture content and test weight. The two systems are like comparing apples and oranges.”

January 30, 2015
The United Nations has declared 2015 the International Year of Soils. The goal of this effort is to “raise awareness of ... More
Prev Post SCALING BACK SCALD
Next Post CHANTELLE DONAHUE: CARGILL'S DEALMAKER 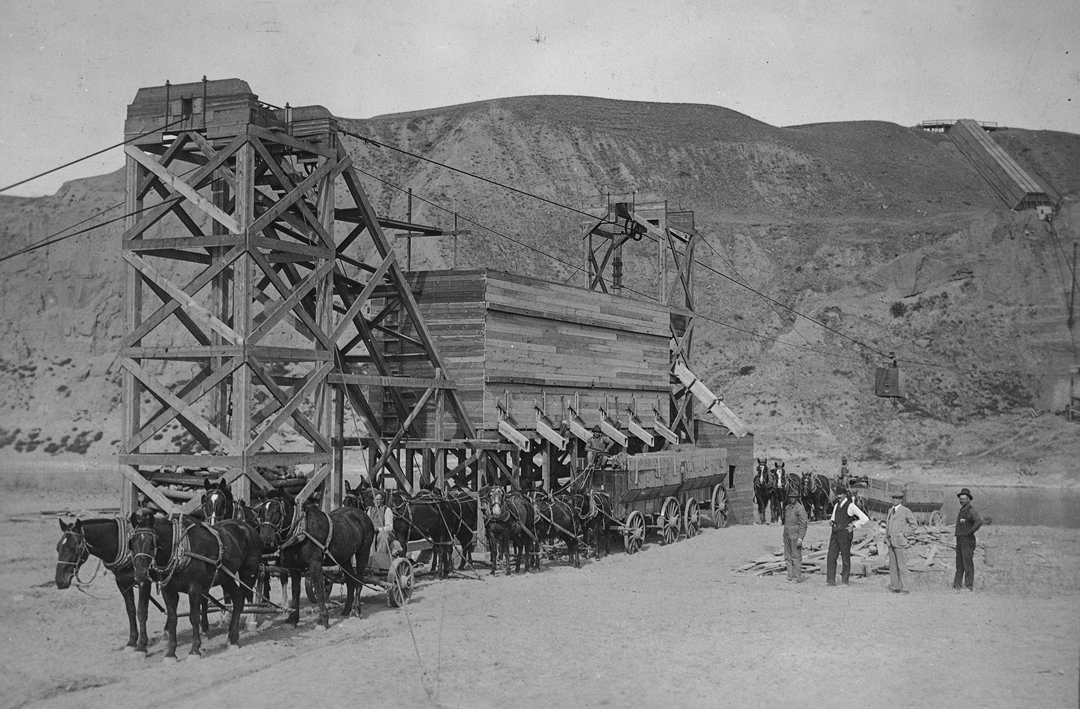