A LESSON IN PATIENCE

If there was ever a golden rule when conversing with a plant breeder, it may be this: Be prepared. To talk plant breeding requires a colossal amount of brainpower, especially once you dive into the genetic nitty-gritty.

Being able to harvest a uniform crop is the result of two factors: hard, carefully planned work by the farmer, and painstaking, meticulous, calculated time in the lab and field by the breeder. Think of a breeder as the portion of the iceberg under the water and a farmer in a field as what’s above.

“It is a science,” said Ron DePauw emphatically. “The underpinning is science principles. If you miss that point, you won’t be successful.”

With more than four decades of breeding experience to his name, DePauw is the senior principal wheat breeder at SPARC, the Semiarid Prairie Agricultural Research Centre, in Swift Current, SK. Western Canadian farmers have benefited over the years from SPARC’s well-known varieties, such as AC Barrie, Carberry and Stettler Hard Red Spring, and Kyle, Strongfield and Avonlea durum.

When it comes to breeding, the goal is just the same as it ever was, despite private interest, if you ask barley breeder Joseph Nyachiro, who works in Lacombe’s provincial Field Crop Development Centre.

“The broad fundamental nature and goals of plant breeding have not changed from increasing agricultural productivity in order to supply adequate food and feed,” he said.

Genetic selection has also made significant gains over the last half-century thanks to computer technology for data collection and cross-referencing, as well as instrumentation advancements to shave time off lab and field work.

“When I started, we were using wet chemistry for protein—the Kjeldahl method,” said DePauw of the longstanding quantitative test that determines protein content. “Now, with infrared, you can get a reading on protein in 20 seconds, so we can just crank them through. We are able to select for protein concentration simultaneously when selecting for yield.”

Despite such advances, breeding is still very much a lesson in patience. Consider this: If a breeder successfully creates a new line, tack on another eight to 10 years for that successful genetic combination to become commercially available for farmers. This means developing a new line can easily take 11 to 13 years in total.

“Why does it take time? You have to go through a biological cycle,” said DePauw, who likened it to pregnancy. “You can’t really do much about that. You can’t throw any dollars at it. It’s the same with plants.”

Breeders look for similar climates the world over to mimic western Canadian conditions to expedite the process by growing two crop cycles per year. Locations include northern New Mexico’s Yaqui Valley, southern California’s Imperial Valley and New Zealand’s Canterbury Plains. The latter has netted the most success, saving breeders up to four years in development.

From there, a breeder will work to select desirable gene combinations and create “inbred lines,” or lines that will annually reproduce the same traits. This is no small task, as there are truly millions of selections a breeder could make with each plant cross.

“There are more ways of failing than succeeding,” said DePauw. “We get lucky every once in a while.”

The story remains the same in private breeding—long timelines and small, incremental success rates. However, private breeding has popped up more and more as companies see renewed interest in hybrid cereals, namely wheat.

“A hybrid breeding model gives one the opportunity to achieve genetic gains in a faster and more efficient way than in a classical inbred model,” said Marcus Weidler, vice president of seeds operations at Bayer CropScience. “You can introduce desired characteristics for the hybrid from both sides: the female as well as the male. One doesn’t need to pyramid all the desired traits in one single line.”

The time commitment is still approximately the same as conventional breeding—about 12 years—but Bayer hybrids, scheduled for release between 2020 and 2025, are what Weidler calls superior, asserting that the lines are “higher yielding and have a higher yield stability.”

However, hybrid breeding still requires two distinct programs, according to Brian Rossnagel, a longtime breeder and University of Saskatchewan professor emeritus with the department of plant sciences.

“You need an inbred breeding program to create each of your hybrid parents, one male and one female, thus there is a lot of regular breeding to be done to produce those best parents,” he said. “Initial hybrid plants will show heterotic advantages, but from there it’s just small incremental gains. This business of ‘faster and more efficient’—I would say that that’s not a defendable statement.” 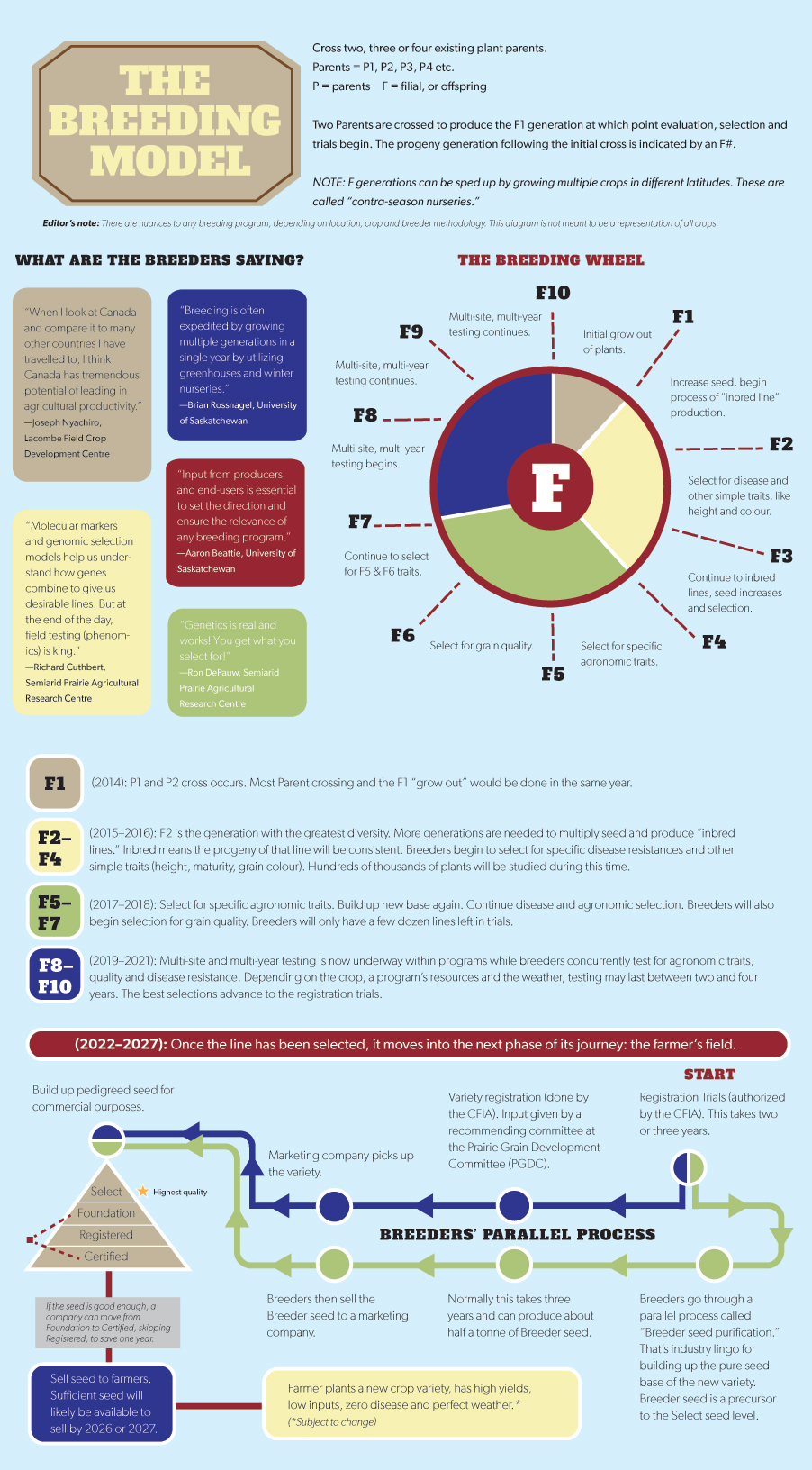 January 30, 2015
The United Nations has declared 2015 the International Year of Soils. The goal of this effort is to “raise awareness of ... More
Prev Post CHANTELLE DONAHUE: CARGILL'S DEALMAKER
Next Post THE SPICE OF LIFE