Outfitted with picnic table seating, and supplied with coffee, snacks and a catered lunch, the tasting room at Origin Malting & Brewing in Strathmore served as the donated venue for a mental health first aid course held Feb. 25, 2019. The group of 20 was comprised of farmers from several communities, ag industry professionals and others with close ties to farming. Everyone in the room raised their hand when asked if they know someone who has experienced a mental health issue.

Presented by the Do More Ag Foundation, a non-profit that promotes mental well-being among Canadian farmers, the course has been offered free of charge in 12 centres across the country starting in February and running through April of 2019. This was done with $50,000 in financial support from the Farm Credit Canada. A two-day, 14-hour program, it is administered by the Mental Health Commission of Canada.

Many at this fully booked session had taken first aid courses in the past, but didn’t know quite what to expect from a seminar focused on mental health.

“Now we think of mental health and physical health as being on one continuum,” said Sue Fortune, a registered therapist and the instructor at the Strathmore course. The signs of physical injury may be more obvious, but adopting this clinical approach to mental distress helps dissolve the stigma attached to it. Fortune also reassured participants that the course would prepare them to recognize signs of mental health problems and reach out in a helpful way.

CULTURE CHANGE
Mental health is still a taboo subject in many rural areas. Among male farmers especially, feeling the need to appear strong and masculine and to take the world on single-handedly can be an isolating feeling. Faced with alarming statistics on the subject, the farm sector has recently begun to take action.

In a University of Guelph study of 1,100 Canadian farmers conducted between September 2015 and January 2016, 45 per cent of respondents were identified as having high stress, 58 per cent had varying levels of anxiety and 35 per cent were depressed. Just as alarming, 40 per cent said they would resist seeking help because of what others might think and half believed mental health support in the ag sector is inadequate.

As Fortune got the Strathmore session rolling, the crowd was quiet and attentive but soon began to open up. Some discussed their own experiences with family, friends and co-workers who’ve suffered, and even about their own difficulties. One participant talked about coming to terms with anxiety and had stopped drinking alcohol just weeks earlier.

“Every step of the way, we’ve been surprised by the response and the support,” said Do More Ag co-founder Kim Keller about agriculture’s new-found embrace of mental health issues and the countrywide seminar. “When we opened up that application process, we thought we’d have to go into communities and shoulder tap and say, ‘please, please apply,’” she said. Shortly after the call went out, the initiative received 100 applications. “Yes, we’re absolutely on the right track, but on the other hand, it’s also incredibly heartbreaking,” she said.

Keller operates a grain farm with her parents and her brother near the hamlet of Gronlid in northeast Saskatchewan. She’s been a full-time farmer since 2016. She also co-founded Saskatchewan Women in Ag in 2012 as well as ag-tech company Farm at Hand, which she later sold.

Her first involvement in farmer mental health was to create T-shirts to support farmers as a Farm at Hand project. In the summer of 2017, a tweet about a farm suicide inspired Keller to use Twitter to help kick-start the mental health conversation. Calling out farmers, ag companies and politicians, she leveraged social media to write an impassioned plea about the need for industry members to come together and support one another.

Keller talked the talk, and then walked the walk by establishing Do More Ag to address the lack of mental health resources she saw for farmers and rural communities.

Just two weeks after reaching out online, she moderated a mental health panel at a meeting of the Agricultural Producers Association of Saskatchewan that proved to be another turning point. Following the discussion to a crowd made up mostly of men over the age of 50, long lineups formed at two mics for a question-and-answer segment. “I remember thinking ‘oh my God, we are going to get it,’” she said. “Instead of backlash, we got tears and thank yous.”

“The very first man said, ‘it’s about damned time we’re talking about this.’ Then he held up both his hands and said, ‘if I count the number of people I’ve lost to suicide on my hands, I run out of fingers.”

“The course identifies the signs and symptoms of various mental disorders and teaches participants how they can intervene or provide support,” she added. “The idea is that by the end of two days, even the reserved people walk away having the skills and confidence to be able to step in and provide support for somebody with a mental health problem.”

Participants effectively become first responders and can provide real help. “The rates of suicide in Alberta are going up,” said Fortune. “It’s not uncommon for mental health first aiders to have to do a suicide intervention. [With] people that are in the darkest moments of their life that are having dark thoughts, asking the right questions can absolutely save a person’s life.”

She suggested once participants complete the course, if they so choose, they can build on their mental health education with specialized courses on suicide prevention and crisis de-escalation. “I encourage people to go out into their communities and pay attention to the people around them, look for signs that a person might be in distress and feel confident to offer support to that person, to change a life.”

All participants receive a certificate upon completion of the course, and Fortune suggested they display these in their offices and workspaces so those around them will know they can receive support. “It tells everyone around them that should they be struggling, they don’t have to struggle alone.”

Kassandra Jansen attended because she wanted to be a better supporter of friends and family members who may struggle with mental health problems. Jansen is a housecleaner who grew up on a farm near Namaka and lives on a grain and cattle farm near Standard with her husband and his parents. She loves the rural way of life, but she noted that farming comes with inherent pressures. Aside from financial worries, there’s rarely enough time in the day to get everything done and maintaining dual personal and professional relationships with family members is challenging.

“There were some really useful skills that were taught in the course,” she said. These include listening non-judgmentally as a means to support people who are going through a crisis. Feeling she is better equipped to recognize the signs and symptoms of mental health problems, she intends to discuss what she has learned with family and community members.

As an innovation specialist with BASF Canada, Dorothee van Dijk visits farms almost every workday. She signed up for the course to learn to be a better judge of her own mental health as well as to be more supportive of customers, family and friends who may suffer from mental health issues.

“There have been moments when I’ve seen somebody in crisis and not known what to do,” she said. The area of the province she covers has endured two years of drought. “I could see that start to take its toll on people. Sometimes it was stated, sometimes is wasn’t, but you could see it. It started to affect my mental health. I realized that I had to step away from work for a week because I recognized it was affecting me and I wasn’t going to be effective in supporting people going through that.

She suggested although there is greater openness about these issues, she’d like to see people take a more personal approach to discussing mental health. “There’s still hesitation to say, ‘I’m dealing with this, I’m having this issue and I’m not doing OK.’”

Hannah Konschuh is the vice-chair of the Alberta Wheat Commission and farms with her parents and husband Casey O’Grady near Cluny. She applied to hold the event and was its volunteer coordinator. Konschuh said the event was fully booked within one day. “It speaks volumes to the amount of interest and need when it comes to resources around mental health and awareness, both in agriculture and our communities,” she said.

“All the people that are on this course, they’re going to go back to their families, their communities and workplaces, and there’s going to be a ripple effect. What they learn here today is going to spread out even further.”

The central feedback from those taking the course, she said, is that it needs to be more widely available.

“We’ve already seen so much progress made, including having our federal government give recognition and support to the mental health of farmers and ranchers,” she said. “I think the fact we’re now able to have this conversation and give recognition to that is a huge step forward.”

Keller said following this year’s pilot project, Do More Ag hopes to expand its funding, allowing more communities to present the courses. Feedback being collected from participants will help adjust and streamline course delivery. Once this is complete, communities that applied but didn’t participate in the pilot will be invited to take part. The application process will then be reopened to additional communities.

Additionally, Keller encourages communities to pursue funding and hire guest speakers on the subject for local events. She advises that these aren’t necessarily expensive initiatives, and she’s found that speakers on mental health tend to draw crowds. She welcomes questions about how to take action at hello@domore.ag.

For more information on the Do More Agriculture Foundation, visit domore.ag. Also listen to The GrainsWest Podcast episode “Reaching out,” which is available from iTunes or wherever you access your podcasts. 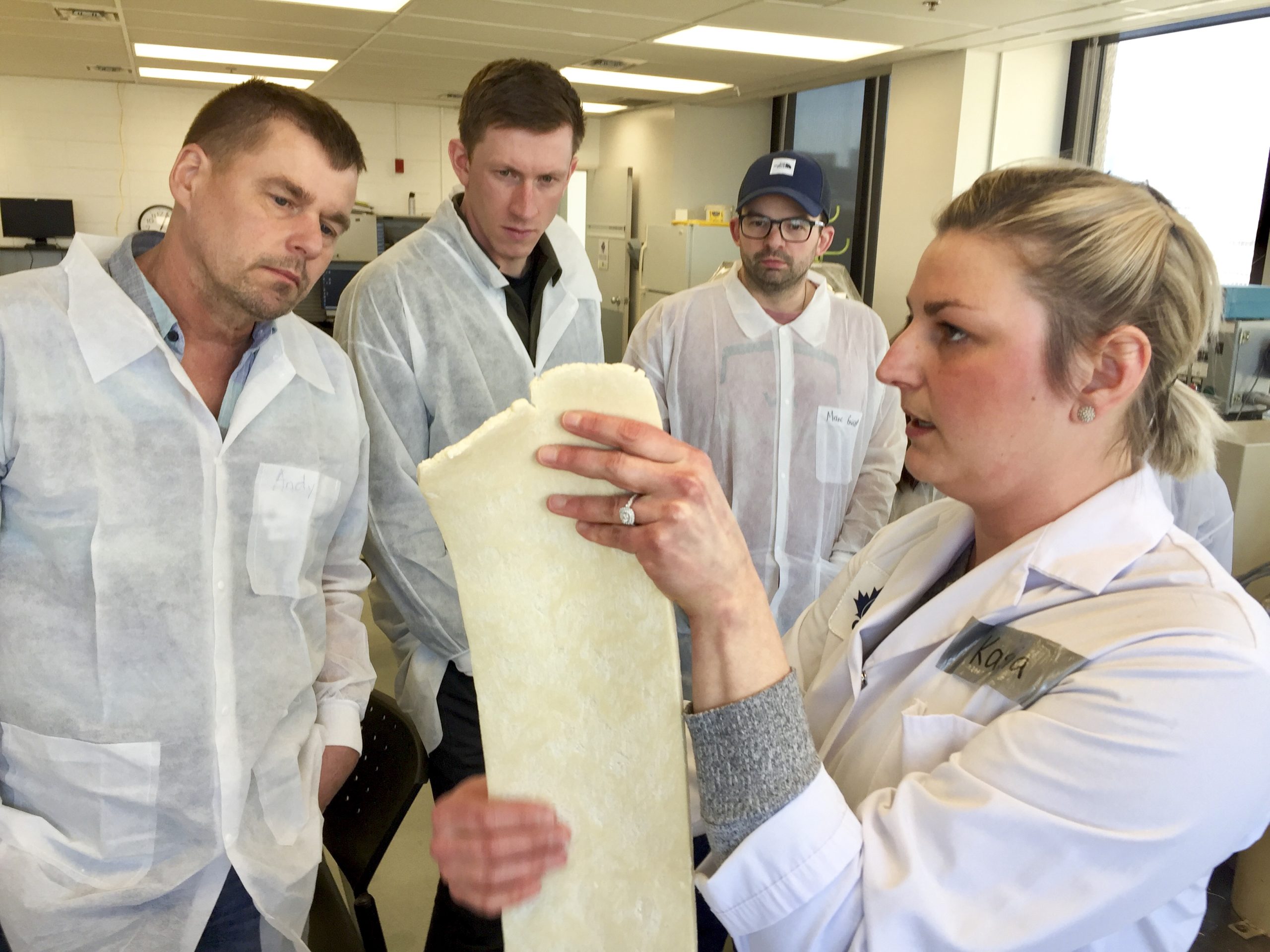